In the fight business, Covington not here to make friends 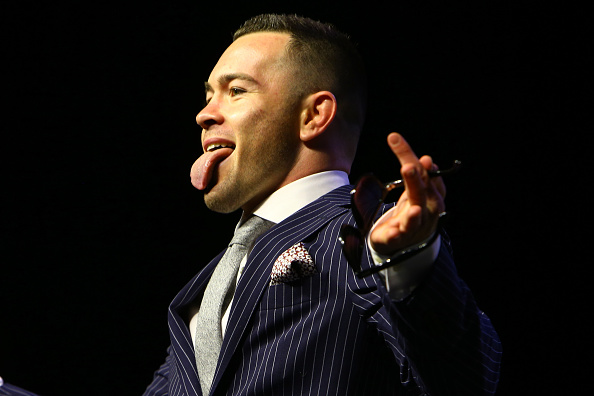 Colby Covington knew something needed to change. After entering the UFC in 2014 with an unbeaten 5-0 record, he took the path most prospects do. Beat a couple fellow prospects, throw a veteran in there, and then soon, the big fights will start coming.

Yet after taking that 5-0 record to 11-1, he was still at a standstill in a tough welterweight division.

“I knew I was the best fighter in the world for a long time,” Covington said. “I was training with the best guys in the world at American Top Team, I knew how good my skills were and I knew it was just a matter of time until I was fighting for a world title.”

He will get that title shot on Saturday when he meets Rafael Dos Anjos for the interim welterweight belt, but June 9, 2018 wasn’t exactly the time table he was working off.

“It took longer than I anticipated,” admits Covington, who decided that he needed to try something different to get the attention and the big fights he wanted.

“I think it’s a little bit of both,” said the 30-year-old Floridian. “I’m definitely a smarter businessman these days and I know what I’m doing now. Before, I didn’t have a plan. I was just fighting, and I was like, ‘I want to fight everybody, I want the best fights,’ but all these guys were turning me down and no one wanted to fight me. So I knew I had to change some things up in the marketing scheme and promote myself a little bit better. I knew what I needed to do to get to this step and get everybody’s eyes on me.”

He got what he wanted, so it’s apparently worked. But is he enjoying his newfound celebrity?

“I’m really enjoying it,” he said. “All the nerds, all these Cheeto-eating dorks trying to play matchmaker online. I love hearing their irrelevant opinions and I’m getting a lot more fans. So the ride is awesome. It’s everything I ever dreamed of and I can’t wait for this weekend.”

A lot of fighters have chosen Covington’s path, but few have made it work the way he has. He isn’t surprised when asked why he’s hit a nerve in the last year.

“I think the biggest thing is that everybody cares about what people think of them and they don’t want to hurt people’s feelings,” he said. “This isn’t the feelings business, this is the fight business. And another thing is, everybody’s worried about making friends in this business. I’m not here to make friends; I’m here to make money.”

On Saturday, he will make his money and he could walk away with an interim title as well. In other words, he will have hit the mark he set. Now we’ll just have to see if he’s going to be “Chaos” forever, or maybe we’ll get a kinder, gentler Colby in the days after June 9. Whatever he’s planning, he’s not telling.

MORE FROM UFC 225: Watch the most recent episode of Embedded | Covington featured on UFC Countdown
“I can’t give away spoilers, even though I am the King of Spoilers,” he laughs.

It bears watching on Saturday night, for sure, but as notable as his tweets and interviews have been, the bottom line is that he still has to fight and back his words up, and he’s got plenty of those words for the former lightweight champion who has gotten off to an impressive 3-0 run at 170 pounds.

“I see a guy that was getting melted by featherweights,” Covington said of Dos Anjos. “He’s not very big for the weight, and I also see a guy that’s confident right now and he’s believing everything everybody’s telling him. Everybody’s telling him he’s a God, that he’s unstoppable at 170. But after I beat him, all these same people are going to be saying he should have been at 155, that he’s too old, that he never should have been fighting for a welterweight title. I don’t see much from him. He’s just a small, little guy with a lot of confidence right now.”

And while the confident Covington admits that getting the belt is “everything that I’ve dreamed of,” don’t expect any tears to be shed in the Octagon should he emerge victorious this weekend.