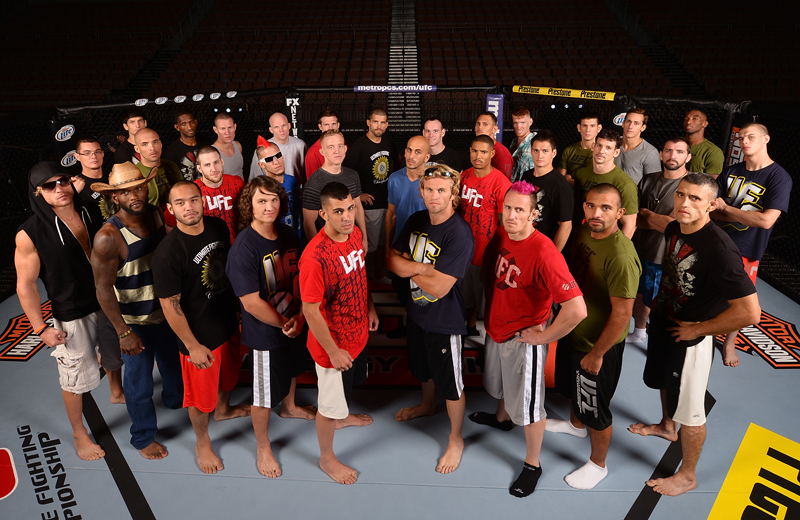 LOS ANGELES (Aug. 30, 2012) – The field of 32 of the most talented unsigned mixed martial artists in the world has been finalized for THE ULTIMATE FIGHTER® FRIDAYS which begins Friday, September 14, on FX with a special two-hour premiere airing at 9 PM ET/PT.

Similar to the inaugural season of The Ultimate Fighter® on FX, this upcoming season will run for 13 consecutive weeks, airing Friday nights at 10 PM ET/PT. The eventual season winner – who will be crowned at the live finale on Saturday, Dec. 15 on FX, will receive a six-figure contract with the Ultimate Fighting Championship® organization.

“Carwin and Nelson are two guys who just can’t stand each other and Roy and I haven’t exactly seen eye to eye either - he’s been a nightmare for me to work with on this show with all his stupid BS,” said UFC president Dana White.

Chuck Saftler, Executive Vice President, FX Networks said, “We feel that the rivalry between these two guys is going to create a season filled with fireworks and high drama, and we already know we can count on Dana White, Lorenzo Fertitta, Craig Borsari and Craig Piligian to bring the highest quality product to UFC fans, so we couldn’t be more pumped about the upcoming season.”

The list of finalists who will now attempt to fight their way on the show was trimmed from more than 60 invited fighters; 29 of the 170 lbs welterweight fighters seeking to cash in on the opportunity of a lifetime are from the United States, two are from Canada while one is Brazilian.

On Sept. 14, the season will kick-off with 16 gripping elimination fights. The winners in the elimination round, or “Fight In,” will become official cast members and earn their way into The Ultimate Fighter house in Las Vegas where cameras will document their activity before and after their training and fights. The 16 winners will be drafted into opposing teams of eight by Carwin and eight by Nelson.

Each team will train at the TUF gym and reside in the TUF house together for the duration of the season. Winners will advance in the tournament until ultimately, one man is crowned THE ULTIMATE FIGHTER.

Many of today’s most recognizable names in MMA have emerged from the TUF series, including, among many others, Rashad Evans, Kenny Florian, Forrest Griffin and Stephan Bonnar.

So who will be the champion on THE ULTIMATE FIGHTER FRIDAYS on FX?

For more show information, bios, videos and photos, visit ultimatefighter.com and don’t forget to follow us on Twitter under our new name @TUFonFX or on Facebook.com/TUF.

The Ultimate Fighting Championship®
Universally recognized for its action-packed, can’t-miss events that have sold out some of the biggest arenas and stadiums across the globe, the UFC® is the world’s premier mixed martial arts (MMA) organization. Owned and operated by Zuffa, LLC, headquartered in Las Vegas and with offices in London, Toronto and Beijing, UFC produces more than 30 live events annually and is the largest Pay-Per-View event provider in the world. In 2011, the UFC burst into the mainstream with a landmark seven-year broadcast agreement with FOX Sports Media Group. The agreement includes four live events broadcast on the FOX network annually, with additional fight cards and thousands of hours of programming broadcast on FOX properties FX and FUEL TV. This also includes the longest-running sports reality show on television, The Ultimate Fighter®, which now airs on FX.

In addition to its reach on FOX, UFC programming is broadcast in over 149 countries and territories, to nearly one billion homes worldwide, in 20 different languages. UFC content is also distributed commercially in the United States to bars and restaurants through Joe Hand Promotions, in English throughout Canada via Premium Sports Broadcasting Inc. and in French throughout Quebec via Interbox. The UFC also connects with tens of millions of fans through its website, UFC.com, as well as social media sites Facebook and Twitter. UFC President Dana White is considered one of the most accessible and followed executives in sports, with over two million followers on Twitter. Ancillary UFC businesses include best-selling DVDs, an internationally distributed magazine, UFC.TV offering live event broadcasts and video on demand around the world, the best-selling UFC Undisputed® video game franchise distributed by THQ, and a new franchise in development with EA, UFC GYM®, UFC Fight Club affinity program, UFC Fan Expo® festivals, branded apparel and trading cards.

FX
FX is the flagship general entertainment basic cable network from Fox. Launched in June of 1994, FX is carried in more than 98 million homes. The diverse schedule includes a growing roster of critically acclaimed and award-winning hit dramas series including Sons of Anarchy, Justified and American Horror Story, and acclaimed hit comedy series It’s Always Sunny in Philadelphia, The League, Louie, Archer and Wilfred. Its library of acquired box-office hit movies is unmatched by any ad-supported television network. The network's other offerings include the acquired hit series Two and a Half Men and How I Met Your Mother, and live sports with college football and the UFC.