Read on for UFC Fight For The Troops 3 online prelim results... 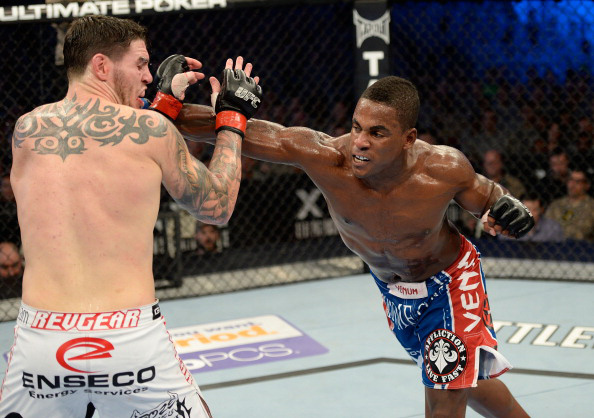 FORT CAMPBELL, KY, November 6 - Middleweight up and comers Lorenz Larkin and Chris Camozzi were a little miffed with their placement on the non-televised portion of the card, so they did what fighters do: they delivered the kind of fight that fans won’t soon forget in UFC Fight For The Troops online prelim action on Wednesday. When it was over, Larkin took the unanimous decision, but there will be no one calling Camozzi a loser after this three rounder.

The first round was a kickboxing fan’s dream frame, as both fighters put their legs to good use, mixing things up nicely throughout. When it came to punching though, Larkin had the edge, punctuated by a right hand that dropped Camozzi 1:10 into the bout. Once he got up, Camozzi rallied, but by the end of the round, the two were back on fairly even footing.

Camozzi remained the busier of the two in round two, but whenever Larkin struck, he did his best to make it count, drawing oohs from the crowd in the process. By the midway point of the round, Larkin’s punches had bloodied Camozzi’s face, and the Californian upped his work rate in response, forcing Camozzi into a clinch with a minute left. Yet once the two broke, they went at each other in a series of furious exchanges before the bell.

In the third, despite fatigue setting in, there was little let-up from either man. Camozzi stayed busy with kicks, Larkin ripped off hard punches and elbows, and the fans loved every second of it, rising to their feet in the final minute to show their appreciation for a fight that will probably keep both men off Facebook for the near future.

Hawaii’s Yancy Medeiros picked up his first UFC victory in impressive fashion, knocking out veteran Yves Edwards in the first round of their lightweight bout.

There was no secret about either man’s strategy going in: it was to stand there and trade punches, and neither fighter strayed from that game plan. Early on, it looked like Edwards (42-21-1) had the edge, but with each shot landed, Medeiros called for his foe to bring it on. Edwards did just that, and with pinpoint accuracy, Medeiros (10-1) struck with a left uppercut, dropping Edwards to the mat. After a quick follow-up, referee John McCarthy intervened, stopping the fight at the 2:47 mark.

Despite a late surge from Neil Magny, it was Seth Baczynski’s early lead that held up in their welterweight battle, with the “Polish Pistola” emerging victorious via unanimous decision. 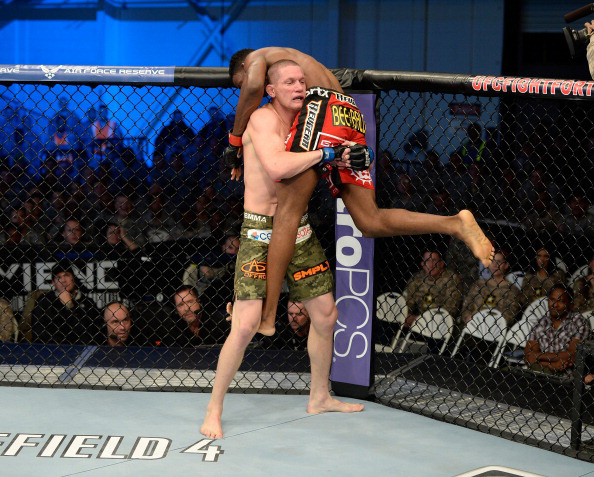 The first round went everywhere – standing, against the fence, and on the mat – and while Magny held his own in clinches, Baczynski dominated the standup action and then finished up the round with a slam of his foe followed by a move into the mount position in the final minute.

There was a lot more clinchwork in the second, with both men again fighting to a stalemate, but when the two got free, it was Baczynski again leading the way with a hard right hand and some solid work from the top position.

Magny finally started to see daylight in the third round, landing hard shots at close range and in the clinch that got the crowd roaring for the U.S. Army veteran. And though Magny rocked the tired Baczynski in the closing seconds, it wasn’t enough to nab the judges’ nod.

Rocking Houston with the first shot he threw, a left kick to the head, Brunson pounced on the stumbling debutant and immediately locked in a rear naked choke. Houston gave a gallant effort in an attempt to escape, but it was to no avail, with the tap out coming at the 48 second mark.