Read on for UFC Fight For The Troops 3 main card results...

FORT CAMPBELL, KY, November 6 – Fighting in front of the men and women of the Armed Forces, U.S. Army vet Tim Kennedy sent his people away more than happy, knocking out Rafael Natal in the first round of the UFC Fight For The Troops main event Wednesday night.

“I’m a hundred percent overwhelmed,” said Kennedy. “You guys are my heroes.”

Neither fighter was taking chances with the punches and kicks they threw as the bout commenced, with everything seemingly coming attached with bad intentions. Kennedy’s kicks to the body and head were particularly effective, but not enough to deter Natal’s stick and move strategy. It was Kennedy’s fists that ended the fight though, with a flush left to the jaw dropping Natal to the mat. A follow-up barrage put an exclamation point on the victory, with referee Herb Dean intervening at the 4:40 mark. 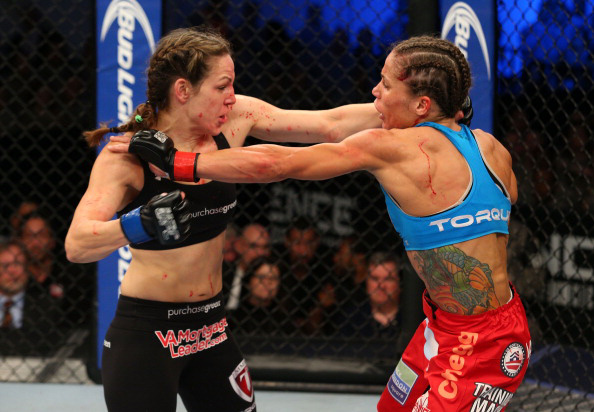 Keeping it standing for the first five minutes, Davis and Carmouche mainly focused on leg kicks in the opening frame, with Davis able to get in some solid punches upstairs as well, but no significant damage being done on either side.

The action heated up in the second, with several exciting exchanges getting the crowd back in the fight. Davis emerged the worse for wear with a cut over her left eye, but she didn’t stop moving forward as she tried to corner Carmouche against the fence. With that strategy not working, Davis simply tossed Carmouche to the mat with a little over a minute to go, eager to use her ground strikes. It was Carmouche who got the last word with a reversal just before the bell though.

A stalemate against the fence opened the final round, with a restart from referee Gary Copeland the result. From there it was the familiar pattern of Davis stalking and Carmouche looking to counter while moving laterally around the Octagon, with the occasional lock-up against the fence.

Former Cuban Olympic wrestler Yoel Romero made it two wins and two knockouts in the UFC, finishing Brazil’s Ronny Markes in the third round.

The two 185-pounders traded kicks exclusively in the early going until Markes got a quick takedown. After Romero (6-1) rose, he jarred Markes with a quick left, and the Cuban’s obvious athleticism drew appreciative cheers. Midway through the round, Markes got a second takedown, but this one he was able to hold for a while. Romero made it back to his feet with 1:40 left, and he continued to stalk the Brazilian, his straight left still being the primary weapon.

The first four minutes of the second round were all Romero, as he kept the fight standing and almost seemed to be toying with his foe. But in the final minute, Markes came alive and went on the attack, and while he didn’t tag Romero with anything significant, he was making him fight.

Markes (14-2) continued to play the aggressor as the final round began, though an inadvertent eye poke from Romero in the midst of an exchange brought a brief halt to the fight. When the bout resumed, it was Romero’s turn to go on the attack, and with the left he was landing all night, he struck once more, this time putting Markes on the deck and bringing in referee Mario Yamasaki to stop the fight. The time of the finish was 1:39.

Check out the highlights from Romero's win

After a range-finding jab to open the fight, Khabilov landed with a hard overhand right, but Masvidal shook it off well. Masvidal’s return fire was measured at best from there, while Khabilov 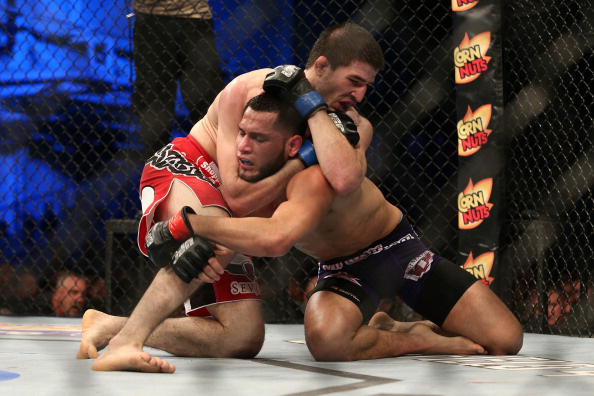 was clearly the aggressor, continually going back to his homerun right hand. With two minutes remaining, Masvidal defended Khabilov’s takedown attempts, but his counterstriking was doing little in the way of effective scoring.

Khabilov (17-1) continued to build up points in the second round, with Masvidal (25-8) showing little urgency in his attack. He did catch Khabilov by surprise with 1:35 left, putting the Dagestan native on his back with a nice takedown. Khabilov showed off some of his own grappling when he returned to his feet, but the round ended with the two standing once again.

With the pace remaining fairly tame, Khabilov finally exploded with a spinning kick that dropped the steel chinned Masvidal with 3:50 left in the fight. Masvidal rose, apparently awoken by the trip to the canvas. Khabilov went back to his grappling, but Masvidal’s defense was solid. Unfortunately, the Floridian needed some offense, and despite fatigue evident on the face of Khabilov, Masvidal was unable to turn things around.

A meeting between Ultimate Fighter winners ended in favor of TUF 15’s Michael Chiesa, as he submitted active duty U.S. Army sergeant Colton Smith of TUF 16 in the second round of their lightweight bout.

A crowd-pleasing slam by Smith in the second minute of the fight almost proved to be a costly one, as Chiesa was able to take his opponent’s back and seemingly be seconds away from finishing the fight due to a rear naked choke. But with his fellow troops cheering him on, Smith got loose and took Chiesa’s back, nearly sinking in a choke of his own. After this back and forth action, Smith smiled and slapped hands with Chiesa, drawing more roars from the crowd just before the bell.

After a stalemate between the two early in the second frame, Chiesa suddenly threw Smith to the mat hard. This time, the Washington state native finished the rear naked choke, forcing a tap out by Smith at the 1:41 mark.

Chiesa ups his record to 10-1 with the win; Smith falls to 6-3 in his lightweight debut.