Read on for UFC Fight For The Troops 3 televised prelim results... 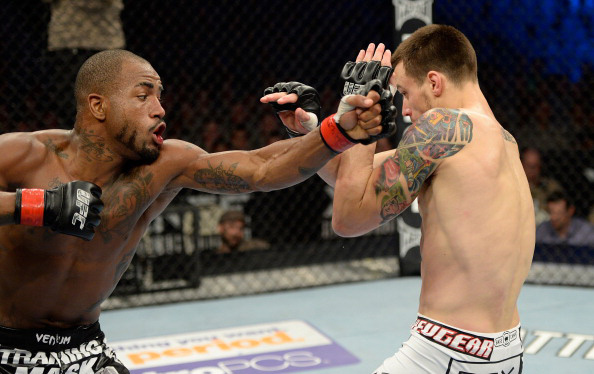 FORT CAMPBELL, KY, November 6 – What was shaping up to be a memorable lightweight clash between veterans James Krause and Bobby Green instead came to a somewhat unsatisfying halt in the first round, with Green winning by TKO in Fight For The Troops preliminary action Wednesday.

The two fought at a frantic pace from the start, consistently trying to go blow for blow with each other at close range. Unfortunately, two stray low kicks wound up costing Green a point. A third kick to the belt line dropped Krause to the canvas, and referee John McCarthy immediately stopped the fight at the 3:50 mark. Most thought that Green was being disqualified for low blows, but replays and the final verdict cleared that notion up, despite protests from Krause and the crowd chanting “Let them fight.”

“After I landed low earlier in the fight, I was making sure I didn’t do it again," said Green. "I felt that last kick was legal and right at his beltline. I felt no cup when the kick landed. I wasn’t sure what John McCarthy saw at first and when he waved it off, I wasn’t sure what the result was going to be. I knew it was a legal kick, so I’m glad it wasn’t a DQ. It was a huge honor to fight for everyone here tonight. I would have preferred a better ending for the troops, but that’s the way it went.”

Bantamweight bomber Francisco Rivera continued to impress with his power and aggressive style, halting George Roop via strikes in the second round.

Rivera’s standup was effective in the first round – when he had the opportunity to use it. But for much of the opening stanza, it was Roop (14-11-1) controlling his foe on the mat, a wise move considering some of the bombs he took while the two stood. In the second round though, Rivera (10-2, 1 NC) patiently waited for his time to strike, and after sprawling out of a Roop takedown attempt, “Cisco” unleashed an all-out assault on Roop, rocking him several times. Roop tried to get out of trouble, but after a final knockdown against the fence, referee Mario Yamasaki had seen enough, stopping the bout at 2:20 of round two.

In a clash of former members of the Ultimate Fighter 14 cast, Dennis Bermudez continued his rise up the featherweight ranks, winning his fifth straight with a shutout unanimous decision over Steven Siler.

Bermudez was relentless in his pursuit of a takedown to begin the bout, and he got it, putting 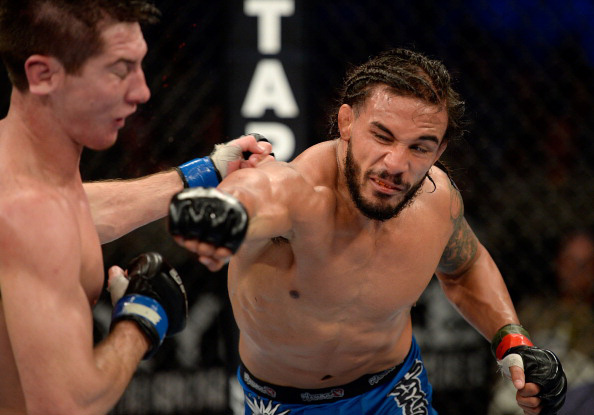 Siler on his back in the opening minute. Siler made it back to his feet quickly, but Bermudez stayed attached to him until a low knee from the New Yorker brought a momentary stop to the action. When the fight resumed, Bermudez again went on the attack, but Siler’s submission attempts kept him out of trouble, at least until Bermudez slammed Siler to the mat, igniting the crowd in the process. A second slam followed, this one with Bermudez sinking in a choke, but after some tense moments, Siler escaped and got back to his feet.

Mixing up his attacks nicely while standing and on the mat, Bermudez had a more dominant time of things in the second round, keeping Siler at bay on the canvas for much of the frame, and in the final round he sealed the deal with another strong effort everywhere the action went.

Brazilian bantamweight Amanda Nunes made it two for two in the Octagon, following up her August stoppage of Sheila Gaff with a similarly impressive first round TKO of Germaine de Randamie.

Nunes took no chances with de Randamie on the feet, and once the Netherlands native fired off a kick, “The Lioness” went for – and eventually secured – the takedown. From there, Nunes moved into the mount position and it was bombs away, with a series of unanswered elbows prompting referee Herb Dean to halt the bout 3:56 into the fight.