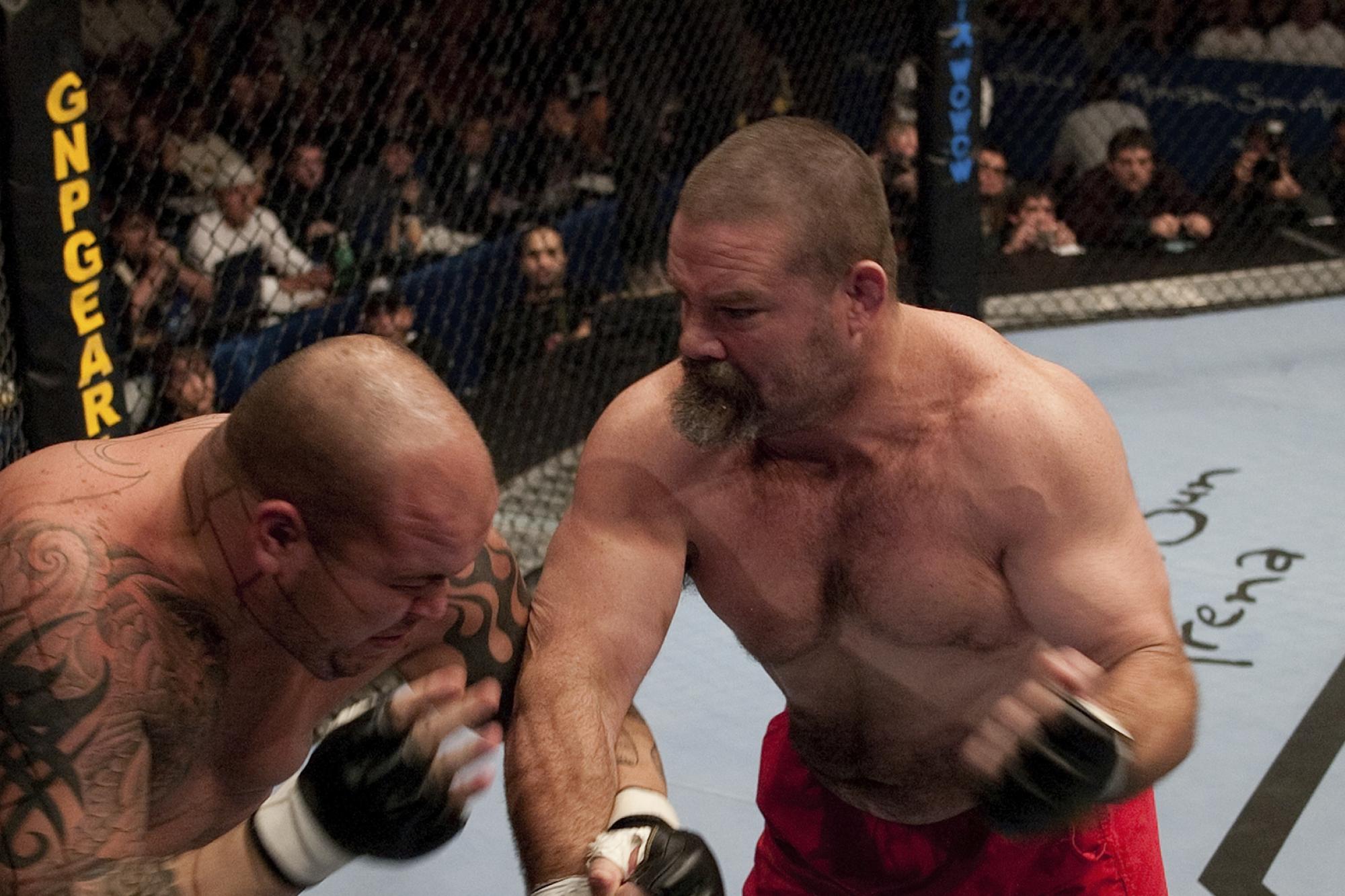 Take a stroll down memory lane as UFC Fight Pass looks back at the career of legend Tank Abbott.
By Walker Van Wey • Oct. 26, 2020

“There’s a sumo wrestler fighting a 160-pound karate expert. If he wins, he might fight the 7-foot tall boxer when he takes on the 5’8” wrestler.”

The possibilities were endless.

While the implementation of judges’ scorecards, rounds and unified rules have carried the sport to popularity beyond belief, there is something oddly satisfying about turning back the clock and revisiting the lawless era.

The world watches in amazement as Khamzat Chimaev and Hannah Cifers jump to fight on every card while David “Tank” Abbott, early UFC veteran and one-half of many freak show fights, explains that while some of the fighters from his era could have made it to the UFC today, it wouldn’t have been as easy for today’s fighters to fight in the pre-Zuffa era.

“A lot of these guys have to have everything perfect for them to even step into the cage,” Abbott said. “Maybe my first show I was as close to perfect as I could get, but after that, injuries and things going on outside of my fight career could pull you down a little bit. But, at the end of the day, that’s why they always called me to fight.”

Records meant little to the promotion or the fans when Abbott made his first splash in the UFC. With largely no sponsorship deals and no reason to be anybody other than yourself, fighters like Abbott flourished with the fans.

No gimmicks, no excuses; just fighting.

“When I fought in the UFC it was the most honest time of the UFC for the fact that there was no judges, no time limits and the tougher guy got the win and walked out of the ring, whereas now you’ve got judges and all sorts of things and it turned into more like a circus,” Abbott said.

In a stroke of irony, the man who walked into the original Octagon without a care in the world was who the fans were most fascinated with.

The more he fought, the more the fans wanted. All the while, all he ever cared about were the fights. Even the new nationwide reputation he got as the tough guy didn’t impress the man who had been leaving an impression with his fists since elementary school.

“I’ve never cared about fame,” Abbott said. “If you took fame into an actual thing, I was famous ever since I was ten years old on my street because I beat up the whole neighborhood. In my world, the whole neighborhood knew who I was and it exponentially grew when I was in high school and after high school into my early twenties. Everybody knew that I was the bad boy of Huntington Beach and there was no dispute.”

“Stumbling upon” an ad for UFC in a Playboy magazine somehow caught Abbott’s attention. And after watching a pirated taping of the original UFC event he read about in the magazine’s flyer, the transition from neighborhood respect at ten years old to bad boy of the MMA world, trying to throw opponents over the cage, came in the exact fashion one might expect it to.

“I was doing work release and I was working for my friend’s dad in a warehouse and he’s like, ‘I can get you in that show,’” Abbott recalled. “He set up a meeting with Art Davie and Art Davie told me that he had some 280-pounder, some huge guy, 6’5” and he wants to fight you. I brought a pair of fight clothes to this meeting in an office. Art goes, ‘OK, we’re going to put you in the show.’ Then he goes, ‘What’s in your bag?’ Because I had a grocery bag that had all of my fight gear in there. I go, ‘I thought you had some big guy for me to fight.’ He goes, ‘you would fight the guy for free?’ I go, ‘As long as we don’t go to jail.’ He goes, ‘you’re f****** crazy.’”

After immediately winning the fans over in his MMA debut at UFC 6, Abbott found himself coming back again and again and again. As surreal as it is, Abbott was an early showstopper in nearly every major promotion of MMA and all you had to do was promise he wouldn’t see jail time.

“I went over to London and filled in for Bob Sapp with a two-day notice and a flight across the pond,” Abbott said of his 2007 Cage Rage bout against Gary Turner. “I was obviously jetlagged and everything else, but I stepped up and I filled in. I showed up and fought. It wasn’t like you got the best Tank. You got the Tank that showed up because everyone else were p*****s and didn’t want to fight.”

It’s impossible to tell if Abbott would have been getting into fights outside the cage on those nights, but it’d be hard to bet against it.

Abbott is a firm believer that his era of fights were the most pure. The days of three fights per night, low pay and less safety may not be what parents raise their kids to live for, but it separated the fighters from the wrestling mat tough guys.

The heights the UFC have reached do amaze Abbott, and while he doesn’t watch fights anymore, he believes MMA is in the most pure state it can be in without devolving. You still can’t thrive in the Octagon with simply one tool.

“They added rounds and judges to make it a sport and legal so it’s as close as it’s going to get to a real fight,” Abbott said. “Much like boxing back in the day. People used to think if you’re a good boxer you’re a good fighter, but nothing could be further from the truth.”

The fighter mentality is alive and well in the UFC and fighters like Justin Gaethje and Cowboy Cerrone continue to carry the “anytime, anywhere” mentality that fighters like Tank Abbott brought in the early stages of the UFC.

The UFC continues to exceed expectations of everybody on the planet, with year-after-year growth and no plans of stopping in sight. Now on ESPN, rubbing shoulders with sports like Major League Baseball and the National Football League, it’s hard not to appreciate our ability to say we were there to witness the UFC in the “old days.”

And while a lot of the fighters ruling their eras will go on to be remembered for decades to come, where will the fighters like Tank Abbott fit in? Will their cult following withstand the test of time or will one of the sport’s most game athletes of all-time fall by the wayside?

As you can assume, it’s all the same to Tank Abbott, but if his legacy does carry on, he knows it will be for his refusal to be anything other than who he was when he first stepped into the Octagon on July 14, 1995.

“I never planned on any of this to happen,” Abbott said. “I’m just really lucky to live my life’s dream. As far as people remember Dick Butkus and those kind of people, it’s cool. If they want to remember me, remember me because I’m honest. I’m not about getting a gimmick and hoping people like it. I’m real.”