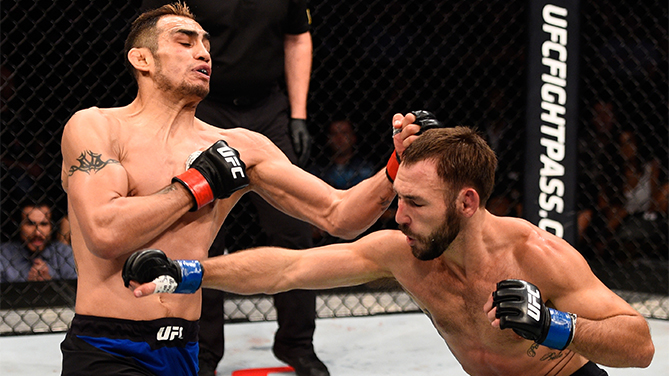 Taking a UFC debut on two weeks’ notice against the No. 3-ranked lightweight in the world might not have seemed like a great idea, but Lando Vannata made quite an impression in his UFC Fight Night co-main event against Tony Ferguson at the Denny Sanford Premier Center in Sioux Falls on Wednesday, proving that he belongs with the best of the best in the Octagon before getting submitted in the second round of a thrilling bout.

The win was Ferguson’s eighth in row. The 155-pound contender was scheduled for a main event bout against Michael Chiesa, but Chiesa was forced out due to injury, setting the stage for Vannata to step up.

Vannata fought like an old pro as the bout began, shooting in an out with a variety of strikes. By the second minute, Ferguson appeared to be getting into a rhythm, but a spinning back fist rocked him and a hard right hand did the same moments later. Both shots seemed to wake Ferguson up, with his jab getting him even with the newcomer. With under two minutes left, Ferguson drilled Vannata with two hard right hands, but he then ate a flush kick to the head that took his legs out. Vannata moved in for the finish as Ferguson tried to clear his head, and eventually, “El Cucuy” nearly locked up a submission, but Vannata escaped by the time the round ended.

Ferguson’s straight punches began to hit their mark more frequently in the second, bloodying the New Jersey native’s nose. Vannata’s habit of keeping his hands by his side didn’t help, and as the two locked up, Ferguson went for and secured the D’Arce choke that put a stop to the bout at 2:22 of round two. 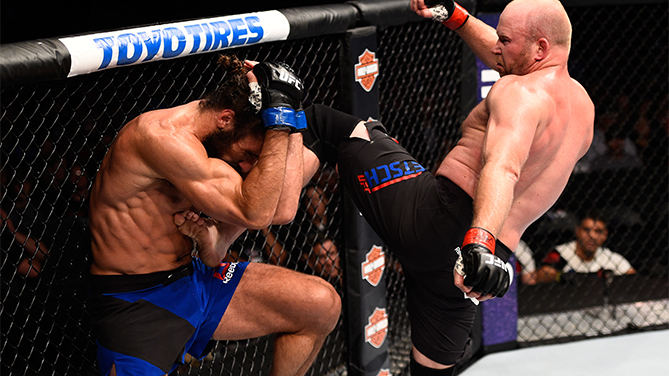 Tim “The Barbarian” Boetsch played it cool in his middleweight bout against Josh Samman, and with a mix of experience and discipline, he was able to dispatch the former Ultimate Fighter semifinalist via second-round TKO.

Engaging immediately, Samman sought a takedown, but when that was turned aside, he settled for a clinch against the fence until Boetsch wound up on top as the two went to the mat. After taking some ground strikes, Samman got back to his feet and the two clinched once more, with only sporadic breaks where the Floridian got some kicks off.

Samman’s striking started to hit its mark in the second, but Boetsch responded with a takedown to kill off his opponent’s momentum, and he controlled matters from the top position as he worked for Samman’s arm. With two minutes left though, Boetsch changed strategies and began drilling Samman with right hands, and after taking a series of unanswered blows, referee John McCarthy had seen enough, stopping the bout at 3:49 of round two.

With the win, Boetsch snaps a three-fight losing streak and moves to 19-10; Samman falls to 12-5. 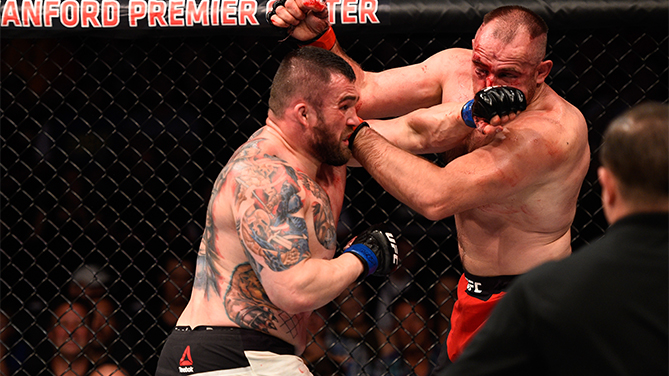 Immediately trading punches to kick the bout off, Oleinik proceeded to lock Omielanczuk up and take him to the mat. After some patient ground work from Oleinik, Omielanczuk got to his feet, but the aptly-nicknamed “Boa Constrictor” kept him locked up against the fence until he scored another takedown with under a minute left.

Omielanczuk got on the board in the second with a hard right hand that forced Oleinik to the canvas, but the bloodied Russia resident fought his way out of trouble with a submission attempt. Omielanczuk regained control as soon as he escaped, and he effectively fired off ground strikes until the two rose with two minutes remaining. Oleinik was able to get a takedown the closing stages of the round, but his submission attempts came up empty.

The fight went back to the mat in round three, but the fresher Omielanczuk was the one in control until referee Kevin MacDonald restarted the action. As soon as they were waved back at each other, the battered Oleinik got the takedown he wanted, and he took Omielanczuk’s back with two minutes left in the fight. It was Omielanczuk reversing position on his exhausted opponent though, and after a restart, the Warsaw native ended the 15-minute battle with a takedown of his own. 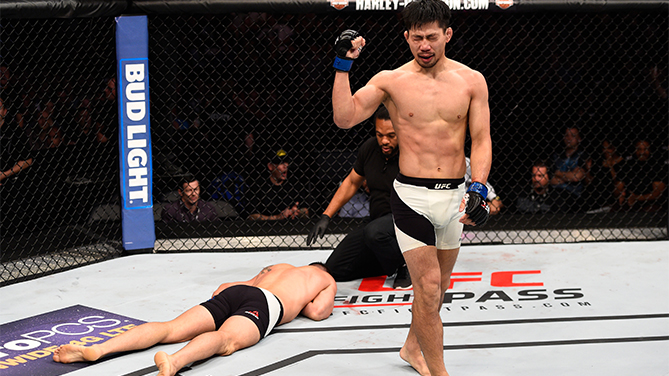 In an exciting clash of welterweight veterans, Japan’s Keita Nakamura submitted Australia’s Kyle Noke in the second round.

Noke’s first left jab wobbled Nakamura, but “K-Taro” quickly got his bearings back. Noke continued to pump the jab though, mixing in hard kicks along the way. Nakamura kept moving forward, and as the round progressed, he landed with a hard kick to the head as well as several flush punches. Noke responded with a quick takedown with two minutes remaining, but both fighters jumped up immediately and continued their striking battle.

After taking the first-half of round two trying to close the distance on Noke, Nakamura appeared to rattle his opponent with his strikes, but Noke recovered quickly. In the final minute though, a Nakamura knee dropped Noke, and with the Tokyo native jumping into action, he took the back and sunk in a rear naked choke that forced Noke to tap out at 4:59 of the second frame. 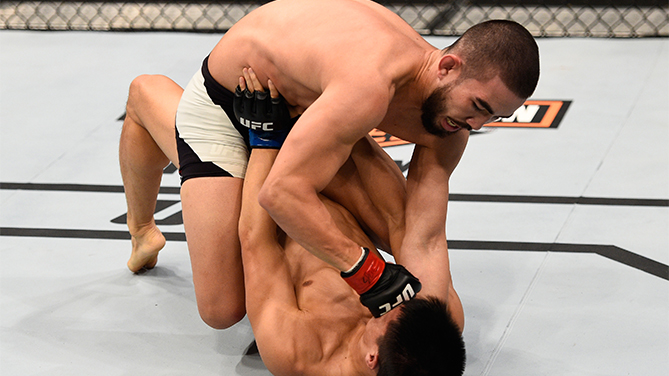 Nguyen went after Smolka as soon as the fight began, but after a quick start, Smolka settled in and took his opponent to the mat. In a scramble though, Nguyen reversed position and took the Hawaiian’s back and then moved into the mount. The scrambles continued, with each man getting his turn in the top position. With two minutes left, Smolka began landing hard ground strikes, allowing him to open Nguyen up for a choke, but the local hero escaped. The strikes kept coming though, with Smolka on the verge of a stoppage win before the horn intervened.

Smolka didn’t let up after his late first-round surge, and he got Nguyen back to the mat early in the second. The ground assault continued, with Smolka giving his foe no room to breathe or respond. Nguyen was game to the end, but finally a furious barrage put a stop to the bout, with referee Herb Dean intervening at 4:41 of round two.