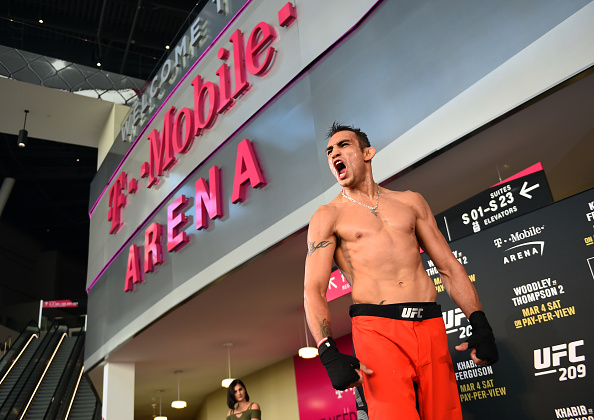 “El Cucuy” showed off his unorthodox striking style and mixed in some dance moves on the stage to the delight of the crowd in attendance at T-Mobile Arena. He faces Khabib Nurmagomedov for the interim lightweight championship Saturday night in Las Vegas, and he's fluctuating between feeling relaxed and energetic in the days before the showdown.

Ferguson is trying to stay cool and mellow during fight week. Every day since he arrived he runs down the Las Vegas Strip, interacting with people on vacation who are taking in the sights of Sin City. Cucuy wants to bring joy to people – even now, just days before the biggest fight of his life.

“I get amped up (from interacting with people),” Ferguson said. “I did the same thing in Mexico City. I see a lot of the security guys that are sitting down, and they’re kind of down and out. I run past them and then go back to them and give them a little high-five. And these guys, they smile, man. I’m paying it forward and passing that smile.”

Ferguson has a lot to smile about. The No. 2-ranked lightweight is riding a nine-fight win streak into his matchup with Nurmagomedov. The two elite 155-pounders were scheduled to fight on two previous occasions, with each having to pull out once due to injury.

“The Eagle” admitted that this fight feels a bit different than the rest. He has called Ferguson his toughest challenge to date.

“I can’t wait when cage close – I want to feel his power, his striking (and) his speed,” Nurmagomedov said of Ferguson. “I want to feel this guy because now we finally fight. (I’m) a little bit nervous but everyone is nervous. I don’t want to lose. But I stay focused.”

There is a lot on the line for both Nurmagomedov and Ferguson. They both have said that the winner of their fight will be the true champion of the lightweight division, yet both likely will look toward a date with the current lightweight champion, Conor McGregor.

But before that can happen, Ferguson and Nurmagomedov will clash on March 4 and it promises to be hellacious.

“This is one of the biggest fights of 2017 and of all time in UFC,” Nurmagomedov said. “I don’t like (Ferguson) too much but we have to give him respect. This Saturday hungry eagle going to eat home cat.”

Ferguson sees the fight going differently. He’s preparing for battle and is prepping his tools for war.

“I’m going to slice him and dice him. He’s got another thing coming to him,” Ferguson said. “I’m keeping these things sharp (pointing to his elbows) on a metal grater with the sparks flying. … I’m here to win. This dude has no way to beat me.”