Ferguson Set On Turning UFC 216 Into His Show

Tony Ferguson has been in this position before, standing on the precipice of fighting for the interim UFC lightweight title.

The first time, the opportunity was stolen from him at the 11th hour, sending him back to the sidelines, back to the gym and back to the drawing board. Seven months later, the surging contender is back in the same position, just a couple days away from challenging for UFC gold for the first time, thankful for the extra time he’s had to prepare for the biggest fight of his career and confident that he’s done the work required to emerge victorious when he squares off with Kevin Lee in the main event of UFC 216 on Saturday night at T-Mobile Arena in Las Vegas.

“It hasn’t been hard at all, man; it really hasn’t,” said Ferguson of the stretch of time between his planned scrap with Khabib Nurmagomedov in March and this weekend’s encounter with Lee. “It’s been a blessing. I think it has made me a better husband, father and overall better person – standing up for myself, fighting for the little guys and making sure everybody knows why I’m here and that’s to remind everybody that you don’t have to talk in order to get to where you need to be. You can rely on hard work, determination and the pursuit of happiness – that’s what it’s all about.” 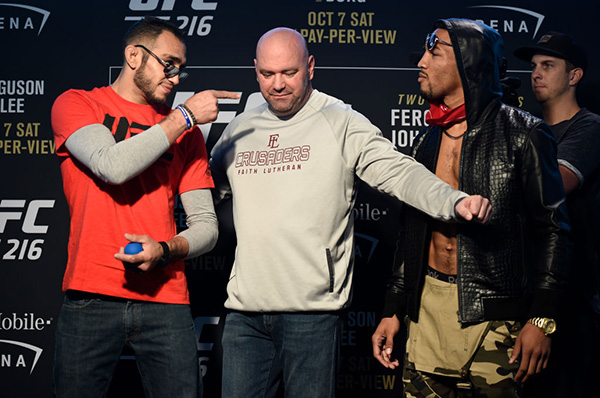 In the immediate aftermath of his bout with Nurmagomedov being scuttled for a third time, questions about when the former Ultimate Fighter winner would return to action and whom he would face were plentiful.

Then in June, Ferguson was serving as one of the analysts for the FS1 studio show covering the Fight Night event in Oklahoma City headlined by Lee and Michael Chiesa. Shortly after “The Motown Phenom” collected his fifth straight win and fourth consecutive stoppage victory, he was taking part in a split screen interview with the No. 1 contender and the seeds for Saturday’s main event were planted.

“I just saw fakeness,” Ferguson said, cutting to the quick of the tense back-and-forth that took place between he and Lee on air following his victory over Chiesa. “I really try to keep it real and I told him that he’s a great athlete. We come from the same background, but unfortunately to make it in this world and make a name for yourself, you have to be more vocal.

“With Kevin Lee, I saw an opponent that was young, hungry and wants the world. Who doesn’t, right? I was young and dumb once, but it’s hard to turn a chump into a champ, but I’m a champ, not that chump.”

While he is yet to officially claim gold inside the Octagon, there is no denying that Ferguson has earned his place in this weekend’s main event.

Over the last four years, the 33-year-old standout has amassed nine consecutive victories, becoming the first lightweight and only the ninth fighter in UFC history to accomplish the feat. His run of success has included victories over tough journeymen, underappreciated veterans and former champions and yielded seven performances bonuses to boot. With each subsequent appearance, Ferguson has turned doubters into believers, showcasing an unorthodox, but effective style that makes him difficult for opponents to solve and tremendously entertaining to watch.

For the battle-tested veteran, being creative in the cage is a byproduct of years of hard work in the gym, drilling the basics and committing the fundamentals to muscle memory, and Saturday’s interim title fight is just the next logical step in his career progression.

“It’s hard to build a house without a strong foundation and for me, I have such an unorthodox approach because I’ve mastered the basics,” said Ferguson. “I’ve mastered everything that I have been taught because I’ve spent hours and countless amounts of energy and sweat molecules doing what I do and doing what I love, which is working out until I pass out.

“If you’re not doing that, you’re in the wrong sport because a shooting star rises fast, but it falls just as fast and I’m a constellation, man; I’m here to stay.

“Aside from the bulls***, I know he’s a good athlete and a gamer and he’s going to bring everything that he can, but I want it more than him,” he said of Lee. “I’m hungrier than him. I need to feed my family. I want another house. I want property. I want to secure my legacy. I want to do these things because that’s my life – that’s what I want. I want to make sure that my kid doesn’t have to fight. I fight so that he doesn’t have to.”

Despite his deep desire to walk out of T-Mobile Arena with the interim lightweight title around his waist, Ferguson isn’t thinking too far ahead or turning this fight into a “life or death” situation in his head. 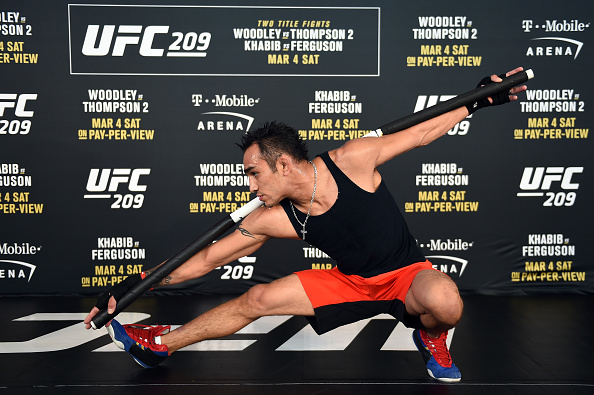 Instead, he’s enjoying the moment, eager to make the most of the opportunity he has on Saturday night, but secure in his knowledge that win or lose, he’s done everything he can to be successful and that friends, family, pizza and beer will be waiting for him once the lights go down and the show is over.

“Saturday is going to be amazing; it’s going to be awesome,” said Ferguson. “I’ve been here before, I’ve been to this dance and I love to dance. Once I hear that music playing, I hear my walkout song, it’s going to turn into my show. It always has been.

“All I know is that as soon as this match gets done – win or lose – I’m going to walk away a champion. Why? Because I gave a valiant effort, I have a great team that helped me to get to where I’m at.

“No matter what happens on Saturday, I’m going to walk away happy, knowing that I gave it my all. I’m going to give my wife the biggest hug and my son the biggest kiss on his forehead and I’m going to enjoy a beer and a pizza with my friends and my team.”