Ferguson to put stamp on chaotic 2016

When it comes to business, Tony Ferguson is more serious than most. That doesn’t mean the lightweight contender can’t crack a smile when jokingly asked why he made things so interesting in his July bout against newcomer and late replacement Lando Vannata.

“I had to,” Ferguson deadpanned. “What kind of sense would that make to go in there and ruin this kid or cut him up and not ever have him get a chance in the UFC again? I’m a nice guy, I helped him out.”

In all seriousness though, Ferguson knows that for a few dicey moments in the first round, his seven-fight win streak and top five ranking were in jeopardy as the debuting Vannata rocked and nearly stopped him. But the Californian didn’t get to this point in his career without knowing how to rebound from adversity. So he did, submitting Vannata in the second round to pick up his eighth win in a row and another Fight of the Night bonus. 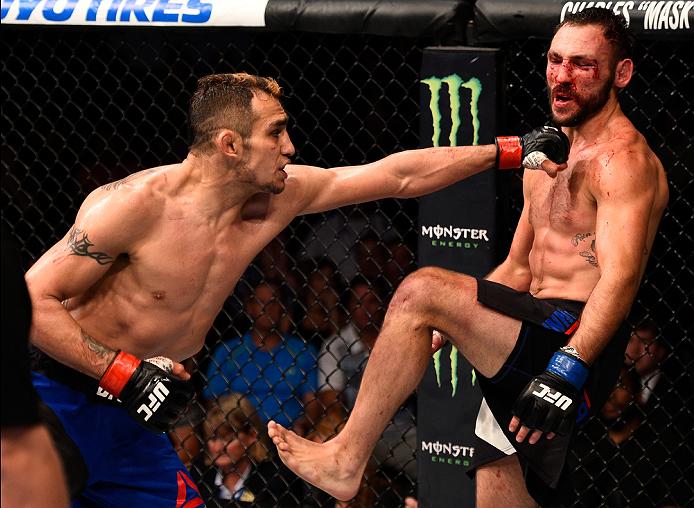 All in a day’s work for “El Cucuy,” who would like to end a rollercoaster year with a win over Rafael Dos Anjos this Saturday.

“With the Lando Vannata fight, I had a lot of things going on,” he said. “I had a death in the family, I bought a house, I started remodeling it, and I had a newborn. But I never gave any bulls**t excuse. I went in there and I fought the way I needed to fight, and I did put on a show.”

2015 was clearly the best year of the former Ultimate Fighter winner’s professional life, as he went 3-0 with three Performance of the Night wins over Gleison Tibau, Josh Thomson and Edson Barboza (a win that earned him Fight of the Night honors as well).

2016? That was great personally, as he and his wife welcomed a son into the world. But professionally, it’s been a mess, as injuries - both his own and those of his opponents – saw fights with Michael Johnson, Khabib Nurmagomedov and Michael Chiesa fall apart. It was frustrating, to say the least, for the 32-year-old.

“I got injured for a while and I felt bad about that,” he said. “I wasn’t there for my family. So what I did was spend a lot of time at home with my newborn, played Bob the Builder (Laughs), and tried to invest into not just myself, but something I believe in, which is my house and my family.”

And once he got past Vannata and received the call to face Brazil’s Dos Anjos, the former world lightweight champion, he left Orange County for the mountains of Big Bear, where he built his own gym.

“I built it straight up with my hands from the ground up,” he said. “No screws left unscrewed, I built everything. It was awesome.”

Until some of those screws got loose.

“I’m looking at my fingers right now and I have a couple little holes in there,” he laughs. “But these are little memories that I take with me. And I take that inside the Octagon. I secluded myself from everything. I took myself out of the picture from OC and finding peace is huge, especially when I’m training for a fight. I feel bad for RDA, honestly because I put a lot of time and effort into this.”
RELATED: Reasons to Watch Fight Night Mexico City | Ferguson's matchup with RDA | Free Fights - Ferguson vs Barboza | RDA vs Nate Diaz

Ferguson talks about the serenity he found in Big Bear, which has long been the home to excellent boxers like Gennady Golovkin, Shane Mosley and Oscar De La Hoya, as well as UFC Hall of Famer Tito Ortiz. But once he traded the high altitude of Big Bear for the high altitude of Mexico City, Ferguson has given up on mincing words when it comes to his peers and his place in the pecking order – not just at 155, but at featherweight and welterweight as well.

“I’m almost to the top and these guys need to get it through their head that I’m coming for them,” he said. “I’m a nightmare for anybody in this division, and even at 145 and 170. And trust me, I will touch those divisions. Once I’m done with this one, I’ll drop down and I’ll jump up. I’ll knock everybody out at 170, I’m knocking everybody out at 155 and you can be damn sure I’ll do the same thing at 145.”

He doesn’t stammer, doesn’t blink. Ferguson is all-in now, and starting on Saturday, he’s in the statement-making business.

“I’m the best in the world, and I can dance with anybody in that Octagon,” he said. “And come November 5, me and RDA in Mexico City, I’m here to provide a show and I’m not gonna disappoint. I give respect to RDA and have no animosity towards him, but this is business. I’m here to do a job and I’m very good at what I do. I’m here to stay.”
Save