Ferguson more focused than ever for UFC newcomer 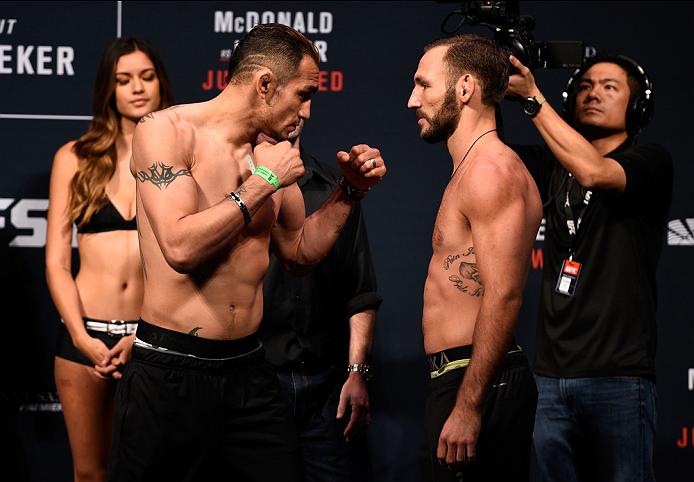 With a wife, a recently arrived baby boy and a new house, Tony Ferguson has a lot on his mind other than fighting these days. Just don’t say he’s getting “civilized” yet.

“I might be (Laughs), but I never lost that animal instinct,” he said. “I'm not worried about the marketing part. I spent so much time and energy working on the talent and the technique and the grind and the grunge that I never really paid attention to the internet websites or selling t-shirts. I was a grinder. I was that guy at shortstop trying to make those plays at first base. I'm a gamer. I hate to lose.”

So if UFC newcomer Lando Vannata thinks he’s going to play Clubber Lang to Ferguson’s Rocky Balboa tonight in Sioux Falls, think again, because with a seven-fight win streak, a No. 3 ranking in the lightweight division, and everything to lose from the matchup, Ferguson is more focused than ever.

“I've been buckling down,” he said before his first fight of 2016.
RELATED CONTENT: Ferguson matchup with Vannata | Ferguson fighter bio | Inside the numbers

Last seen in December, when he put on a brilliant performance in submitting Edson Barboza (a bout that earned him Performance and Fight of the Night honors), Ferguson has had a rough go since then that has had nothing to do with his work inside the Octagon.

First scheduled to face Michael Johnson in a March rematch, Ferguson saw that fight get scrapped in favor of an April showdown with Khabib Nurmagomedov, who “El Cucuy” was originally scheduled to face last December. This time, Ferguson was forced out of the bout, and while a fight with Nurmagomedov (who defeated replacement foe Darrell Horcher) is still an attractive one, he didn’t want to wait until the fall to compete again.

“I like to stay active,” Ferguson said. “I'm an athlete. And I felt like I wasting time. I told (UFC matchmaker) Joe (Silva) and (UFC President) Dana (White) that I needed to keep busy. Like I said before, I'm gonna tick everybody off and I'm gonna do it with pleasure. So they hooked me up with Mike Chiesa, who was a game opponent. He's up and coming and being from the same upbringing, I thought it would be a good fight.”

Then Chiesa got injured and was removed from the Sioux Falls main event. In stepped Vannata for a co-main slot, and Ferguson didn’t refuse him.

It’s a game where the unbeaten Vannata can shock the world with a win and immediately become a player at 155 pounds. For Ferguson, his upside is a paycheck and another win, one that won’t move him any closer to a title shot, but that keeps him busy. The downside? He’s fighting someone who has never competed in the UFC, making him a mystery only revealed through YouTube videos. That could be a problem. Ferguson insists it’s not.

“I'm confident with my hands, I'm confident with my jiu-jitsu and my scrambles and my conditioning,” the 32-year-old said. “I'm an all-around badass fighter and my fight rating in my own mind is a lot higher than what everybody else gives me. And I take pleasure in that because no matter who you put in front of me, I'm gonna outwork them with techniques that they're not used to seeing.”

And when that happens, Ferguson knows what comes next.

“You get to see that panicked look on their face, and that's the key to victory right there. A lot of guys go in there with a plan, but for me, the plan is to always outwork my opponent, and I make him panic by testing his conditioning and mental toughness. Can you take a hit and keep moving and can you think on your feet? Can you think quick? There are a lot of good fighters out there that do that, and I happen to be one of them and I happen to think I'm one of the world's best at that.”

He’s already one of the world’s best lightweights, even if he believes he hasn’t gotten that due yet. But that’s okay, because he’s embracing that perceived disrespect.

“I go out there and put on a helluva show and I think the fans, and my fans especially, are very excited that I'm even still fighting,” he said of tonight’s bout. “People are gonna hate anyway, so let them hate, let them watch me win, and let's see the reaction afterwards. There's that famous saying, 'I need new haters because the old ones are starting to love me.'”

Ferguson laughs, ready for the fight ahead and confident of its outcome.

“It doesn't matter who they put in front of me,” he said. “You could put in the biggest superstar in the UFC or the unknown, I'm still gonna go in there and get my hand raised in the end, and it's going to be a glorious battle.”