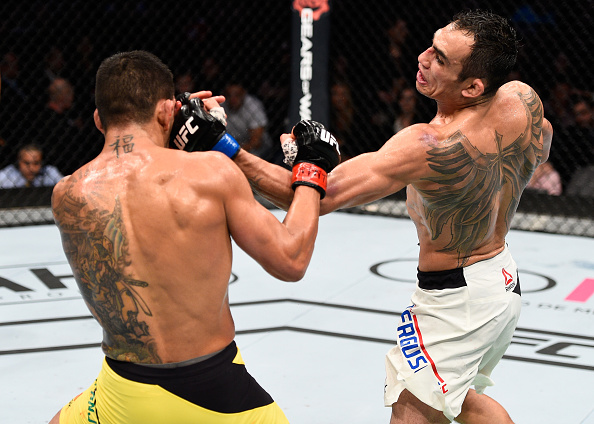 Tony Ferguson may have cleared the last hurdle on his way to a lightweight title shot on Saturday night, as he scored a five-round unanimous decision over former world champion Rafael Dos Anjos at Arena Ciudad de Mexico, extending his winning streak to nine in the process.

Fighting for the first time since losing his 155-pound crown to Eddie Alvarez, Dos Anjos scored with kicks to the leg that made an immediate impact in the early going, and while Ferguson stayed active, the Brazilian’s shots were more accurate and had more weight behind them. With under two minutes left, a kick from Dos Anjos took Ferguson’s legs out from under him, but after landing a few ground strikes, the two rose and the already established pattern continued until a late surge from Ferguson.

Keeping his work rate high in round two, Ferguson began to land more frequently, but his momentum was momentarily halted after he landed an accidental eye poke, bringing in the Octagonside physician to check on Dos Anjos. When the action resumed, Ferguson went back to work and had more success, briefly rocking Dos Anjos with a minute left as he began to take control.

Busy and dynamic with his attack, Ferguson couldn’t have been more comfortable in the third round, but Dos Anjos may have stolen the frame, as the harder strikes were the ones thrown and landed by the former champion.

Seemingly unimpressed by Dos Anjos’ power, Ferguson got back on track in the fourth, mixing up his strikes and pouring it on as the bloodied RDA was unable to keep up with the Californian, and the fifth was even worse for Dos Anjos, who was game, but simply outgunned on this night.