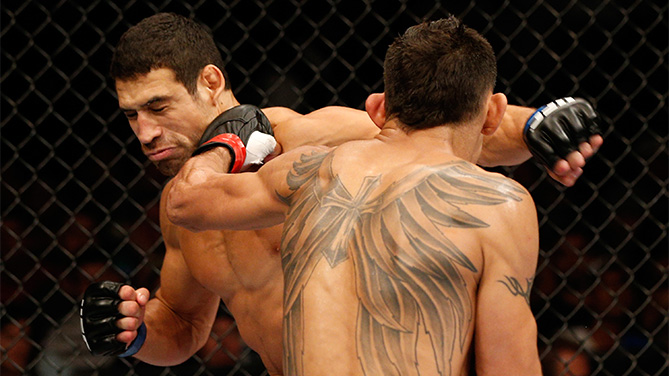 It wasn’t a popular verdict with the fans at Sleep Train Arena in Sacramento, but Ultimate Fighter 13 winner Tony Ferguson scored the most important victory of his career in the UFC 177 co-main event Saturday night, taking a hard-fought three-round split decision over hometown favorite Danny Castillo in a meeting of lightweight prospects.

Ferguson was busy with his kicks to the leg and body to open the bout, and his defense was solid too as he threw off Castillo’s first takedown attempt. By the second minute, Castillo was firing his right hand at Ferguson, trying to hold his opponent off, and then the left stared landing. Midway through the round, the two exchanged shots, and in an ensuing scramble, Ferguson locked in a D’arce choke. With a little over a minute left, Castillo pulled free and went to work from the top position for the rest of the round.

The fast-paced action continued in round two, with each fighter having his moments in the sunlight while standing. Just before the midway point, the fight strayed to the mat, Castillo in control on top. Ferguson reversed in a scramble, and Castillo followed suit seconds later. Ferguson was the busier fighter from the bottom position, with Castillo controlling the location of the bout, but not doing anything offensively.

Continuing to pressure his opponent, Ferguson rolled for a kneebar early in round three, and when that came up empty, “El Cucuy” went for an armbar. Again, he was turned away, but he kept doing what he could to make the fight. Midway through the final frame, Castillo got a takedown, holding Ferguson down as the Orange County product threw elbows from his back. In the final minute, Castillo got into full mount briefly and nearly sunk in an arm triangle, but the horn intervened, sending the bout to the scorecards.
> Watch: Tony Ferguson and Danny Castillo Octagon Interviews 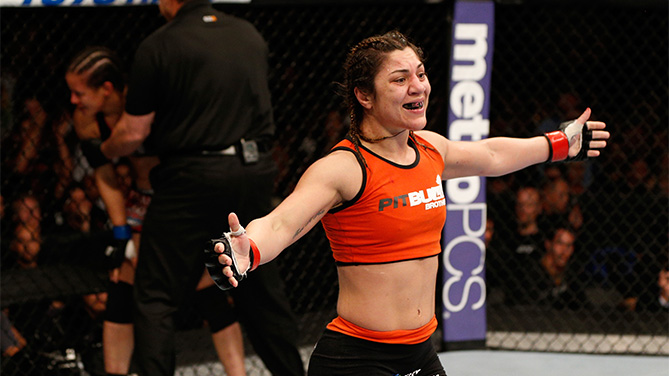 Brazilian bantamweight contender Bethe Correia rebounded from some rough moments in the first round of her bout against Shayna Baszler to finish the fight in the second, spoiling the debut of the women’s MMA pioneer.

The victory was the second by Correia over a member of Ronda Rousey’s “Four Horsewomen” team, and the “Pitbull” had a message for the UFC champ.

"If there’s someone who will retire without any losses in the UFC, it’s going to be me. I’m going to retire with the belt, not her."

The bout hit the mat early, and though Correia had the top position, it was Baszler doing the most damage as she nearly locked in a submission. Correia fought her way out of trouble and got to her feet, but Baszler locked her up against the fence, dominating the grappling portion of the fight there and on the mat, where she nearly sunk in a choke before the end of the round.

In the second, Correia (9-0) got her striking game in gear thanks to some hard body shots, and as she pinned the 34-year-old Baszler (15-9) to the fence, she opened fire. Baszler took punch after punch, and after watching closely for a response from “The Queen of Spades,” referee John McCarthy stepped in and stopped the fight at 1:56 of the round. 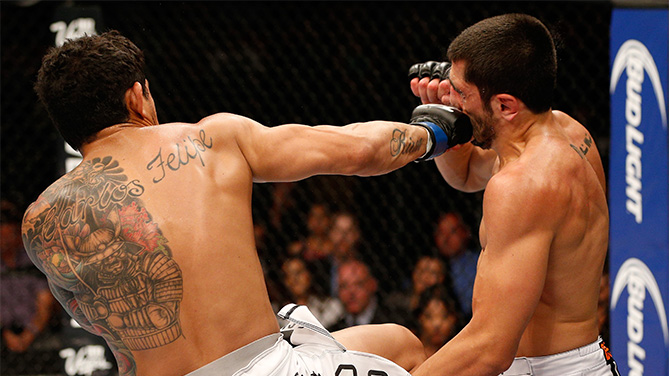 “I’ve been working a lot on my striking,” Ferreira said. “I’ve been training hard, and it paid off.”

Nijem’s striking was sharp from the start, and it was clear that he had no intention of sticking around for three rounds. Ferreira (11-0) seemed to be baffled by Nijem’s stick and move strategy, as he had few answers for his foe’s attacks. With a little over a minute to go though, Ferreira tagged and hurt Nijem with a right hand, and he immediately sought the submission. Nijem’s defense was solid, and he made it out of danger and the round.

Ferreira’s heavy hands struck early in round two, with another right hand dropping Nijem (10-5) and forcing him to seek a takedown. The Brazilian locked in a guillotine choke, but again, Nijem managed to find daylight and get back to his feet. With a little over three minutes left, Ferreira sent Nijem down again and this time he didn’t let him get back up, with a follow-up series of shots bringing in referee Herb Dean to stop the bout at 1:53 of the second. 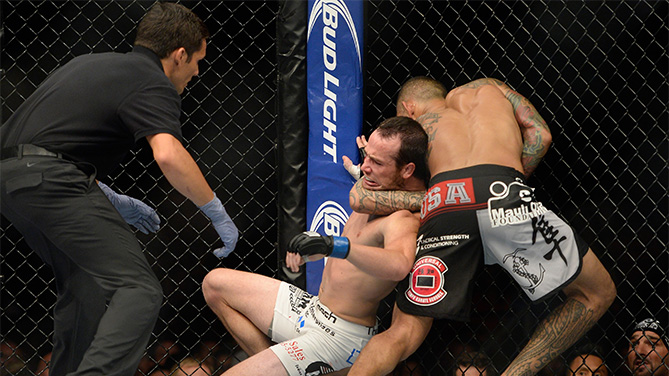 With the ability to keep Jackson from getting the bout to the canvas, Medeiros had a strong first round, as he dominated the striking and held his own during grappling segments against the fence.

Jackson had more success on his feet in the second frame, which only served to ignite Medeiros’ attack, as he mixed things up nicely to the body and head. Jackson went all in for the takedown in response, but it was Medeiros who ended the fight right there, as he suddenly locked in a reverse guillotine choke that brought a halt to the action at the 1:54 mark.

With the win, Medeiros improves to 10-2 with 1 NC; Dallas’ Jackson, who replaced the injured Justin Edwards on a little over a week’s notice, falls to 9-1.

In addition to their fight purses and any post-fight award bonuses, all main card winners received a custom 2015 Harley-Davidson cruiser to celebrate the launch of the 2015 H-D Hometown Throwdown contest. For more information, click here