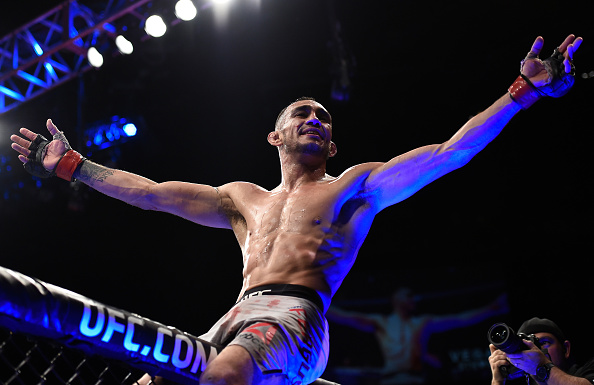 It’s been a long road to the top for former Ultimate Fighter winner Tony Ferguson, but Saturday at T-Mobile Arena in Las Vegas, “El Cucuy” finally struck gold, submitting Kevin Lee in the third round of their UFC 216 main event to win the interim UFC lightweight championship.

The win was Ferguson’s 10th in a row, and none was bigger, but as soon as he received his belt, he sent a message to the 155-pound champion, Conor McGregor.

“Defend or vacate,” said the new interim titleholder, who first had some business to take care of with “The Motown Phenom.”

Lee struck first with a left kick to the head and a right punch, but Ferguson was unmoved by the shots. A right hand moments later scored a flash knockdown of “El Cucuy,” but Ferguson returned the favor seconds later. Midway through the round, Lee got a takedown, but Ferguson scrambled and nearly caught his opponent before Lee got loose and settled into the top position. In the final minute, Lee got into the mount and he began unleashing elbows, and while Ferguson survived the round, it was not without a shot after the bell by Lee, who received a stern warning from referee Herb Dean. 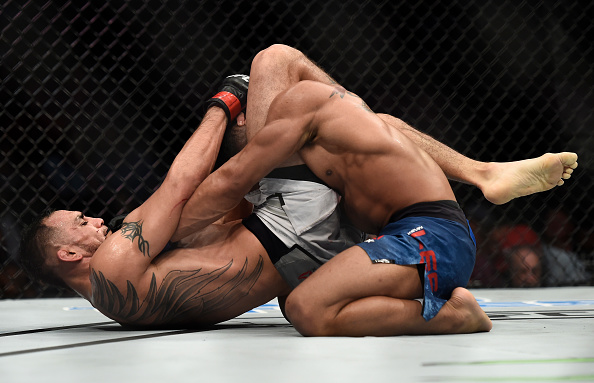 Ferguson settled into the fight by round two, and he held the edge in a frame fought solely on the feet, with an elbow to the face being his most telling blow, as it brought blood from the nose of the Michigan native.

Lee got Ferguson to the mat to begin round three, but the Californian got up fairly quickly. Fatigue was setting in for Lee, and Ferguson sensed it as he stalked his opponent. Lee did find the energy for another takedown, but Ferguson nearly sunk in an armbar. Lee got loose, but he then found himself in a triangle choke with a little over a minute left. Seconds later, the fight was over, with Lee tapping out at 4:02 of the third round.