It's Nothing But Positive Vibes For Canada's Felicia Spencer, Who Hopes For To Inspire Others To Be Themselves.
By Gavin Porter, on Twitter: @PorterUFCnews • May. 20, 2021

If you take a look at Felicia Spencer’s UFC tenure, you’ll notice that her only two losses have come at the hands of women’s MMA royalty. Spencer displayed incredible toughness and true potential in her featherweight bouts with former champion Cris Cyborg and current two-division champion Amanda Nunes.

Despite losing the bouts, the 30-year-old Spencer believes those fights were important to her story, and that the experience gained inside the Octagon with two legends like Cyborg and Nunes are priceless.

“It’s an amazing experience to have and I know that not a lot of people will experience what I’ve experienced. It was an honor to be sharing an Octagon with both of them,” Spencer told UFC.com. “The best thing about it is that now I start to hear people talking about how it inspires them, or they feel motivated by it and that’s really the best part for me. I was just doing my thing, I was just living my life, and now other people are telling me that it motivated them to do something. That’s really powerful to hear. That’s really my favorite part of the experience.”

Part of the reason that people are so inspired with Spencer’s performances is how much heart she put into each of the bouts. She took both fighters the distance and never quit when many would have.

And although she’s happy that people think she’s tough, “Feenom” would prefer for fans to see her as a talented fighter who just happens to be tougher than nails. She believes she proved that when she submitted Megan Anderson and when she knocked out Zarah Fairn.

"I really want to win in the first round, that would really be the icing on the cake."

Felicia Spencer (@FeeNom479) talks about growing as a fighter over the past year, lessons learned from facing both Amanda Nunes & Cris Cyborg and her expectations for #UFCVegas27 🔊⬆️ pic.twitter.com/USqBzykKet

Now she’ll look to prove it again on Saturday when she faces Norma Dumont at UFC Fight Night: Font Vs. Garbrandt.

“The durability points always come up [when people think of me] but I’m fine with that. I know it’s part of my story that people talk about being tough and this and that, but hopefully some of the fans will also see some skills in there with all the toughness that I’ve shown,” Spencer said. “If I see an opening or if I have an idea in my head and accomplish it, then I’ll be happy. I really want to win in the first round, that would really be the icing on the cake.”

Both of Spencer’s UFC wins came in the first round and she is confident that she can continue that trend anywhere the fight goes with Dumont. 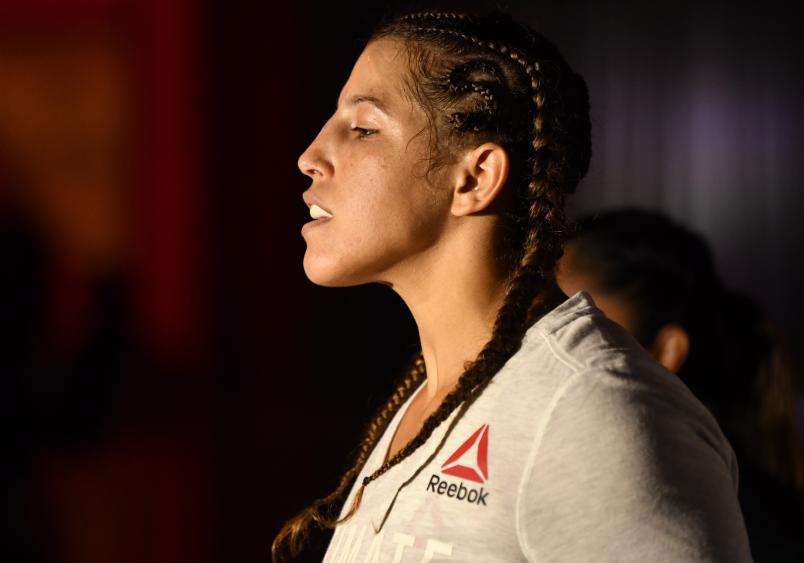 Felicia Spencer of Canada prepares to fight Amanda Nunes in their UFC featherweight championship bout during the UFC 250 event at UFC APEX on June 06, 2020 in Las Vegas, Nevada. (Photo by Jeff Bottari/Zuffa LLC)

“I think it’s a good matchup,” Spencer said. “She’s a well-rounded opponent. It’s exciting for me, because it kind of allows me to have a more well-rounded approach to the fight, so now I have more tools at my disposal, and it allows me to shine more on Saturday.”

After being away from the Octagon for almost a full year, Spencer feels like she’s grown so much that she’s levels above where she was when she fought Nunes. Most importantly for Spencer, she enters this fight with Dumont with a fresh mind and a hunger for the next chapter in her story to be a good one.

“It’s crazy that it’s been almost a year, but there’s been a lot of learning over the last year, a lot of growing. I feel like I’m a different person coming into this week as opposed to last year,” Spencer said. “There’s definitely some mental growth, and for me having the break, it almost makes it feel new again, even though it’s very familiar to fight. But I’m ready to go show what I’ve been working on.”

Don’t miss Spencer’s return to the Octagon this Saturday at UFC Fight Night: Font Vs. Garbrandt, which will air live on ESPN+. The prelims start at 4pm ET / 1pm PT and the main card kicks off at 7pm ET / 4pm PT.