Felice Herrig: TUF Times are Over 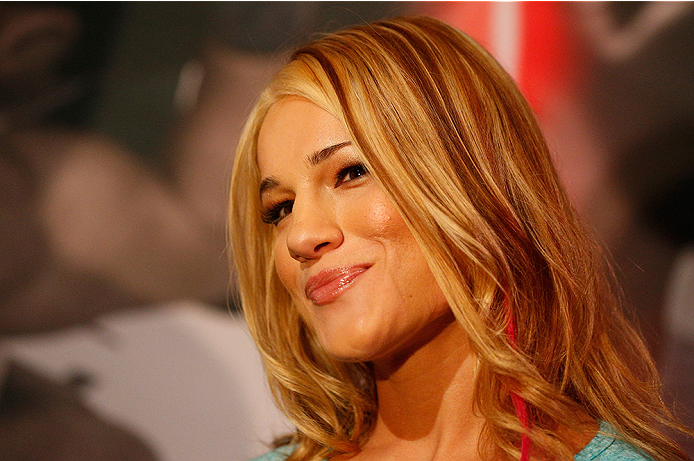 If you want a straight, unfiltered answer on any topic from someone in the fight business, going to Felice Herrig is a good place to start. Over a decade as a pro fighter will do that to a person, and at this point in the UFC strawweight’s career, she has no time for fluff.

Having said that, let’s get into it. So Felice, if you had to do it all over again, would you compete on season 20 of The Ultimate Fighter.

That answer alone speaks volumes, but we all love specifics, and Ms. Herrig is more than willing to give them.

“I didn't like the vibe of being there, I didn't like the environment, I didn't like how catty the girls were,” she said. “It was like high school and, honestly, a lot of it was for no reason. I would just rather be with my team and my support system and not have to deal with the drama that doesn't usually involve fighting.”

But despite having an idea that her stint in the world of reality television was going to present such issues, she did it anyway, saying “how can you turn it down?”

She couldn’t. Neither could her 15 castmates, all of whom had the opportunity to not just expose themselves and their division to the masses, but to get the chance to compete for a world title. Herrig, 30, wasn’t about to pass up the show, not after paying her dues with little reward for so many years. So was six weeks in the TUF house in Vegas the ideal for her? No, but that doesn’t mean there weren’t some positives.

“Whenever you go through hardships, the rewards are great, and it always makes you a stronger person and a stronger fighter,” she said. “You get to be there and get your hands on the top 15 girls in the world, and gauge yourself as to the level you're at. I'm not gonna say it wasn't positive, and it's great for my career, but I really wouldn't want to have to do it again. I'm thankful every day that I'm home.”

She laughs, and at the time this interview was conducted, Herrig was baking cookies with her mother back home in Illinois. She couldn’t partake in the finished product since she was working her way down to 115 pounds for her UFC debut against Lisa Ellis Friday night, but she said the process made it feel like Christmas, and that made her happy.

Another thing that makes Herrig smile these days is knowing that the airing of the show is over and now it’s just time to fight. What some don’t realize is that for most of the competitors on TUF, once taping is over, it’s back to the daily routine and looking forward to the future. But then you have to relive the show for 12 weeks while it airs, and if there were any negative experiences, you get to see them again, along with the rest of the world.

“The hard part is that the show's on every week, and you're already kind of over it and past it, and everything is so delayed, so by the time it actually airs, I'm already past it, but people haven't seen it yet,” Herrig said.

The Chicago native made it to the quarterfinals on TUF 20, defeating Heather Jo Clark before losing to Randa Markos. It wasn’t the way she wanted the show to go, but a 1-1 run isn’t a bad showing either. So does she think the world got to know her a little better over the last couple months?

“Yes and no,” she said. “People are always so quick to judge. The whole time on the show, you keep your composure and you feel like you carry yourself well and you handle yourself well, and then you make one little slip up and then everybody wants to persecute you for it. So I think people will ultimately see what they want to see and it just depends on the person. I think that people definitely got to see more of me and who I am, but at the same time, there's only so much that they air. People get glimpses and they know me a little bit more, and I'm happy with the way I came across on the show.”

What they did get to see is that for all the marketing Herrig does, when it comes down to it, she’s a fighter. She knew it all along, but the perception that it wasn’t the case cut her at times.

“It's very emotional because you're putting yourself out there to be judged, and people act like I don't love fighting,” she said. “I love fighting and if I didn't love it, I wouldn't want to get the attention for people to see my fighting. Everything I've done is to create a better life for myself and so that I could make a living doing what I love to do, which is fighting.”

The funny thing is, when the criticism comes from her peers, a lot of them haven’t been around a fraction of the time Herrig has been, whether she was fighting in MMA or kickboxing. 28 pro kickboxing matches and 14 pro MMA bouts aren’t the sign of a hobbyist looking to make a quick buck, but now that she’s established and in the UFC, she’s not particularly looking for acceptance.

“For a long time I did care about that, and I would try, but then I realized that it's all about perception,” she said. “You can't please everybody no matter what you do in life. And even when you think you're doing the right thing, or everybody's seeing you for who you are, people take it out of context or they take things wrong. In taking something off the show, I realized that I don't care anymore. (Laughs) It sucks being in the public eye because everybody is there to judge you and say that you're this person that you're not, whether it's good or bad. Nobody will ever really know who I am or what my story is.”

So from now on, Herrig is content to let her fists tell a story, and she plans on writing the first chapter on the face of Ellis, a castmate who she says she got along with on the show, but who apparently turned on her during a post-show media tour. And after that, Herrig requested to be matched up with Ellis Friday night. She got her wish.

“Stylistically, it's perfect,” Herrig said. “I couldn't have asked for anyone else better. It kind of fell into my lap, because stylistically, I think she's the perfect matchup for me. I don't feel threatened by her in any way, so I'm like 'hey, I'm really glad you started with me, Lisa.' And I don't think she believed it was actually going to happen.”

As Mike Goldberg would say “it is going to happen,” and Herrig can’t wait to put the TUF fighter tag aside and simply be called “UFC strawweight contender.”