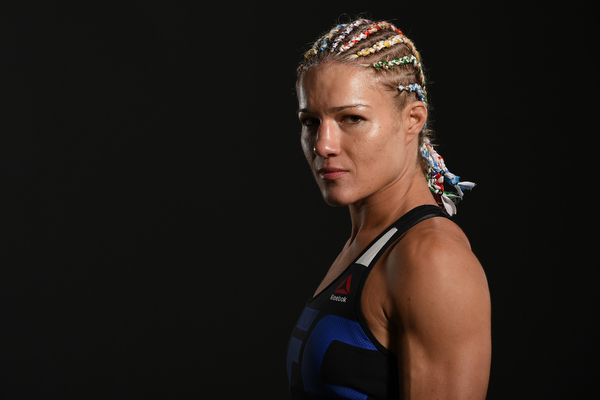 Felice Herrig cried when she received her purple belt in jiu-jitsu from longtime coach Jeff Curran last month. It wasn’t because it was a visible sign that she could do armbars and chokes better than most people in the world or that getting a belt from Curran was a true accomplishment and not just the result of sticking around long enough.

Instead, it was a reminder of where Herrig came from and where she was at. When she started her MMA journey, she was an accomplished kickboxer in a sport that had reached a dead end in terms of future growth at the time. For Herrig to continue to fight and make a living at it, she had to switch, and that wasn’t easy.

So the last thing she was thinking about was collecting belt ranks. She just needed to handle herself if she got tied in knots against the fence or taken down to the canvas in this whole new world.

“It was hard to start over and learn jiu-jitsu and wrestling and all that,” she said. “When I got into MMA, I got into it simply because that’s where the sport was going. You really couldn’t do very much with kickboxing and I started learning the grappling and jiu-jitsu just because I needed to, as it was a part of MMA. I never cared about belts, but then as I started really getting better and better with jiu-jitsu and wrestling, I had such a love for it and a passion where I wanted to continue to excel. Once it started to click and I started to understand it and appreciate the art and the sport of it, I wanted to get my black belt one day.”

She’s on her way, and you get the impression that no matter how far she goes in MMA, jiu-jitsu will remain a part of her life. But for now, the focus is on what happens in the UFC’s Octagon, specifically this Saturday’s co-main event against Alexa Grasso. The Mexican phenom is seen as the next big thing in the strawweight division, with nine wins, no losses and the opportunity to capture a big name for her resume in Herrig, who has no intention of going away quietly.

In fact, after a 1-1 start to her UFC career, the 32-year-old Herrig gave her career a jolt last July when she picked up a Performance of the Night bonus for a submission of Kailin Curran that took less than two minutes. And it happened in Herrig’s Chicago hometown to boot. But this was more than a snapshot for her career scrapbook. A lot more.

“I feel like it was a turning point,” she said. “I did so many things so wrong over the years and I was too stubborn to realize it, whether it was the diet and the weight cut or overtraining and just always doing too much. And actually, before that fight, I had taken a year off – not from training, but from fighting – and I took a step back to evaluate myself and what I was doing. I changed things up in my training camp, I had some health issues so I worked with a doctor to build everything back up, and with that fight, it was nice to see that I could come back strong and I could come back and be the fighter that I always knew I was capable of being.”

The win over Curran did show Herrig at her best, and it sets up an interesting matchup with Grasso, who has the talent to compete with the elite at 115 pounds, but not the experience. That comes with time, and no one knows that better than the “Lil’ Bulldog.”

“I’ve been doing this for so long that I think that what most fighters fear is the unknown and I do fear that,” she said. “That’s never gonna change. You’re never gonna have a fight and stop fearing. That’s what makes us sharp and that’s what makes us go out there and perform. But I have confidence that I’ve already faced everything that I could really possibly face. I’ve been in situations where I thought a fighter was gonna fight one way and they fought another way. I’ve been in situations where a fighter fought exactly how I thought they were going to and I stuck to a game plan, or I had to switch things up last minute in the cage. I’ve had the opportunity to experience all the elements of the game. And when you’ve been in those situations and you’ve dealt with them, you know how to deal with the next one that comes around because you’ve already been there.”

Felice Herrig has been there and done that in both kickboxing and MMA, and while she still has more to do, she admits that it is nice to occasionally look back at the hard-fought journey that made her who she is today.

“I have a room that’s like my fight / superhero room and it’s got pictures of tons of fights throughout the years,” Herrig said. “I have a bracelet that I’ve had ever since I started fighting and I get a new charm for it for every fight. And I look down on it and it’s just a reminder. This sport’s hard, it’s tough and sometimes you only think about everything you’re in at that moment. So sometimes it’s nice to just take a step back and remind yourself that hey, I’ve already been here, I’ve done this 50 times and it’s nice to see what I’ve accomplished and all those times that I was fearful and felt the same emotions I’m feeling now. Every fight, you think, ‘Oh, this is gonna be my last fight,’ and it’s just because it is scary. It’s a scary thing to go in there and do what you do, but I get back up and I keep doing it over and over again. There must be something to be said about that. I must really love it.”