UFC will continue its run of shows on UFC FIGHT ISLAND with a highly anticipated bout guaranteed to deliver fireworks as No. 2 ranked Brian Ortega takes on No. 4 ”The Korean Zombie” Chan Sung Jung in a clash of featherweight contenders. Also, recent women’s flyweight title challenger and No. 1 ranked contender Katlyn Chookagian looks to spoil the 125-pound debut of former strawweight champion Jessica Andrade.

UFC FIGHT NIGHT ON ESPN+®: ORTEGA vs. THE KOREAN ZOMBIE will take place Saturday, October 17 from UFC FIGHT ISLAND on Abu Dhabi’s Yas Island. The main card will begin at 7 p.m. ET / 4 p.m. PT in English and Spanish on ESPN+, with the prelims kicking off at 4 p.m. ET / 1 p.m. PT. The event is in partnership with the Department of Culture and Tourism – Abu Dhabi.

Former featherweight title challenger Ortega (14-1, 1 NC, fighting out of Los Angeles, Calif.) returns to action for the first time in almost two years and hopes to deliver another show-stealing performance. Throughout the Brazilian Jiu-Jitsu black belt’s UFC run, he has earned spectacular finishes over Frankie Edgar, Cub Swanson, Renato Moicano and Clay Guida. He now seeks to get the last laugh against Jung and secure himself another world championship opportunity.

Perennial fan-favorite Jung (16-5, fighting out of Seoul, South Korea) has been thrilling fans for years with exciting bouts and highlight-reel finishes. Having ended 14 of his 16 wins before the final bell, Jung has turned heads with sensational stoppage victories over Frankie Edgar, Dustin Poirier, Leonard Garcia and Mark Hominick. Jung now aims to put his rivalry with Ortega to bed and stake his claim as the next UFC featherweight title challenger. 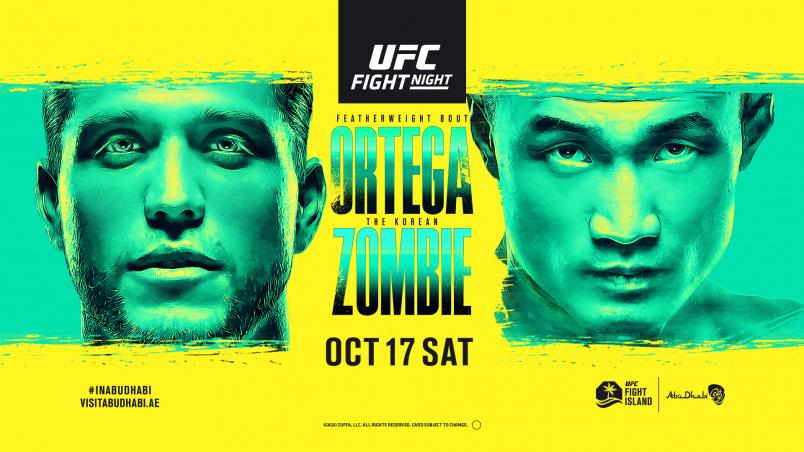 Chookagian (14-3, fighting out of Kenilworth, N.J.) has her sights set on building off her most recent victory over Antonina Shevchenko and defending her spot atop the women’s flyweight rankings. During her UFC run, she has netted exciting victories over Jennifer Maia, Joanne Calderwood and Alexis Davis. Chookagian now aims to keep her momentum going by finishing a former UFC champion and earning another title opportunity.

Former strawweight champion Andrade (20-8, fighting out of Niteroi, Rio de Janeiro, Brazil) looks to waste no time in her move up to flyweight by taking out the division’s top contender. A powerful grappler and heavy-handed striker, she has delivered incredible finishes against Rose Namajunas, Karolina Kowalkiewicz and Joanne Calderwood. Andrade now hopes to make an immediate impact at 125 pounds by stopping Chookagian to secure herself a flyweight title shot.