Fatherhood changes everything for Ellenberger 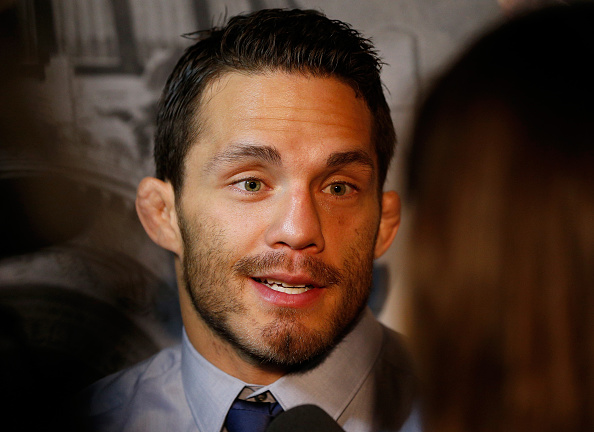 For a veteran who has been squaring off with the best fighters his division has to offer for the past six years, welterweight Jake Ellenberger is acutely aware that anything can happen when the Octagon door closes. It’s a reality he’s experienced from all angles, and his ability to stay on the plus side of such a curve has allowed him to retain elite status in a weight class that has long been considered the most competitive under the UFC banner.

Nevertheless, it wasn’t something inside the Octagon that brought about the biggest change in his life; it was the birth of his first child that shifted everything around in Ellenberger’s world.

Up next for Ellenberger: Fight Night Newark vs. Tarec Saffiedine | Get your tickets now

While the Omaha native has always been a cerebral fighter in a rigorous game, the arrival of his son Jameson in July immediately stretched out his perspective into a long-view panoramic. It was as if a switch both instantaneous and joyous had flipped in Ellenberger’s world and nothing has looked the same for him since.

“Things definitely change when you have a kid,” Ellenberger said with a laugh. “It changes how you view things and that is especially true about the long term as I plan things for him and his future. The same rings true for how I see the fight game as well. I’ve tried to live that eat, sleep and breathe fighting lifestyle and that only makes it more stressful. That’s just not for me.

“With my new focus and how my life has changed it has given me something that allows me to unplug from all of that. It allows me to distance myself from the stressful part of fighting. You have to have something else - at least I would think most of the higher-level fighters do. We have families or activities we love that take our minds off what we are putting ourselves through and relax.”

“The Juggernaut” will step in and throw down with Tarec Saffiedine at UFC Fight Night: Johnson vs. Bader this weekend in Newark, New Jersey, in what is set to be a pivotal matchup for both men. Where Ellenberger was once within striking distance of a shot at the welterweight strap just south of three years ago, a rough stretch where he’s suffered setbacks in four of his last five showings has pushed the U.S. Marine Corps veteran to the brink of being ushered out of the upper tier at 170 pounds.

The same rings true for Saffiedine as well.

Although the Belgian striker was the last man to hold the Strikeforce welterweight crown and made a successful bid in his long-awaited UFC debut back in January of 2014, the two years that have followed haven’t been kind to the “Sponge.” The 29-year-old came out on the losing end of a highly anticipated showdown against Rory MacDonald nine months after his inaugural showing inside the Octagon, then was forced to the sidelines for the next 15 months while he recovered from an injury.

Those situations have combined to make their upcoming scrap in Newark a must win affair, and Ellenberger believes he has what it takes to get his hand raised on Saturday night.

“As unfortunate as it is, you always learn more from mistakes and losses than you do victories and I’ve had plenty of those,” Ellenberger said lightheartedly. “After everything I’ve been through, I really believe I’m at the top of my game in regard to my personal evolution, and having a few solid months to make some changes before this fight was even scheduled definitely helped.

“Unfortunately, everything is always black and white when it comes to winning and losing, but there is so much in between that has to be taken into consideration. I’ve had so many fights where I landed a punch, dropped my opponent and the win is so close that I can see the ending, and for whatever reason things didn’t work out the way I hoped it would. That said, I am not a man who lives in the past or dwells in the rearview mirror. If you are going to be a learning machine, you can’t allow setbacks to eat you up. Positives and negatives can be found in every situation. You just have to be able to swallow your pride sometimes to see them.”

Although the newest addition to his young family has certainly kept him on his toes, Ellenberger has a familiarity with Saffiedine that has allowed him to find a strange comfort in his next go. The upcoming collision between the two welterweight powerhouses is the third scheduled meeting between them, as the matchup fell out on two previous occasions.

While Ellenberger admits their history presents a strange wrinkle to the matchup, he’s not expecting Saffiedine in his current form to be the same as the fighter he prepared for in earlier camps. That said, Ellenberger believes the same goes for his side of the equation and expects some high-octane action once things go live at Prudential Center.

“It was funny to have this fight come back around but I always kind of figured it would,” Ellenberger said. “The first time we were supposed to fight, I suffered an injury and it was the only time in my entire career I had to pull out of a bout. The second time, Tarec became injured and he was forced out. We were the main event of that card and had spent a good amount of time around each other promoting the fight and I thought he was a really nice guy.

“I originally thought I was going to face Patrick Cote but that wasn’t the fight that came down the line. When I heard it was Saffiedine, I was like, ‘Okay…third time is a charm.’ Also, the timing works out much better for me in this fight because I believe I’ve really expanded my mind and body to become a better overall mixed martial artist.”