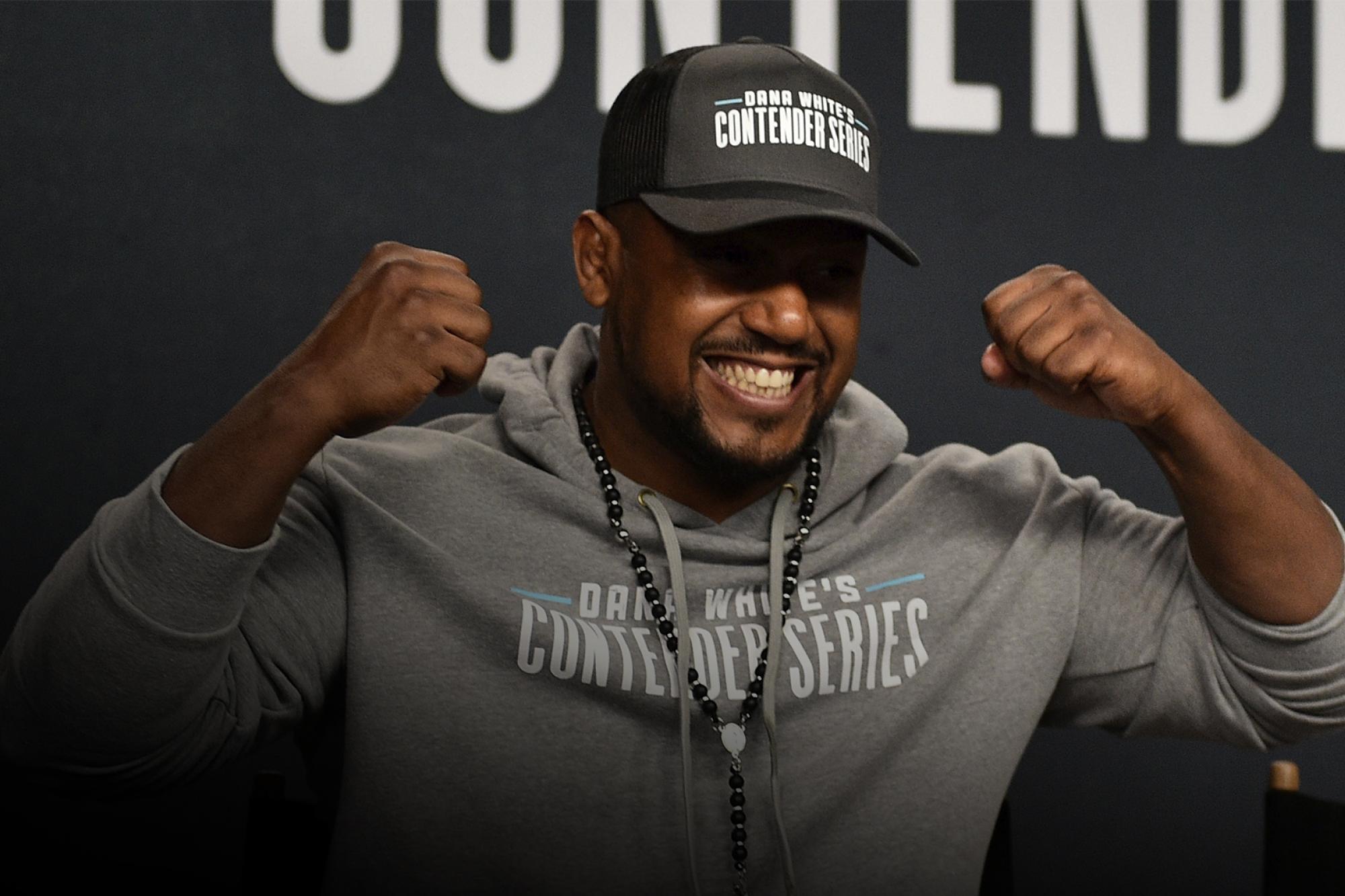 “My coach keeps telling me all the time, ‘Dude, you’re ‘The Mad Titan’ and you’re fighting in Marvel Stadium in Australia,’” laughs De Castro, the coincidence too good to ignore.
By Thomas Gerbasi, on Twitter: @TGerbasi • Sep. 30, 2019

When the topic of fate comes up, Yorgan De Castro doesn’t dismiss such notions.

“I’m a big believer that everything happens for a reason,” said the Cape Verde native, who makes his UFC debut this weekend against fellow newcomer Justin Tafa in Melbourne, Australia.

Yes, a fighter nicknamed “The Mad Titan” after the Marvel Universe character Thanos is fighting in Marvel Stadium.

“My coach keeps telling me all the time, ‘Dude, you’re ‘The Mad Titan’ and you’re fighting in Marvel Stadium in Australia,’” laughs De Castro, the coincidence too good to ignore. “This is amazing. Everything is lining up for a good, good show and I expect a good outcome too.”

One chat with the unbeaten heavyweight prospect and you wouldn’t be out of line to suggest that he’s the happiest fighter on the roster. Many fighters say competing in the Octagon is a dream come true. You feel it when you talk to the 32-year-old, who just a few short months ago didn’t know if it was too late for him to make a run at the UFC.

“I can’t believe a couple months ago I was fighting at Twin River Casino for my fourth fight,” said De Castro. “I was thinking a lot, and thinking if it was worth it to do this. And now I’m gonna be fighting on one of the biggest cards of the year.”

That night in January, De Castro scored his fourth win since turning pro in 2017, outpointing Carlton Little Sr. over three rounds. He wasn’t the main event in Rhode Island, it was his first distance fight, and there was no indication that five months later he would be signing a UFC contract.

But in this business, especially if you’re a heavyweight, all it takes is showing up and performing for that one opportunity of a lifetime. For De Castro, that opportunity was Dana White’s Contender Series, and in less than a round, he stopped the heavily favored Alton Meeks and punched (or should we say kicked) his way into the UFC.

Everything had changed. Well, not everything.

“I’m just getting noticed more,” he said. “Everywhere I go around here, people know who I am. So any store, any gas station, people know me. But the rest remains the same. I work six to three every day, pick up my daughter from school, so it’s all the same.”

But there is the reality of debuting in a stadium expected to be filled with more than 55,000 fans come fight night.

“This is outstanding,” he said. “I used to fight in front of 300 people down here in the Fall River Casino; now I’m going to be fighting at Marvel Stadium in front of 50-something thousand people. Plus, it’s on ESPN pay-per-view, so I’m going to be all over this place. I keep making history for myself. This is the biggest card of the year, the biggest card ever in Australia, it’s with great fighters and I’m honored to be on this card. I’m very happy.”

It doesn’t even bother the Fall River product that he’s taking on a local favorite in Tafa, who was born in New Zealand and who lives in Australia, ensuring that he will have the entire crowd in his corner when the Octagon door shuts.

“My third fight, I went all the way to Maine to the guy’s backyard,” said De Castro of his November 2018 bout against Ras Hylton. “There were about 300-400 people and I only brought like 12 guys with me. (Laughs) It was a good night for me, I knocked him out in the first round. I like it (the Tafa fight) because the pressure is gonna be on his side, not my side.”

But did De Castro and his 12 buddies have to hightail it out of Maine that night?

“The people were actually very cordial,” he laughs. “They treated us very good, and I always respect the people I fight. We fight, but this is business, so I always respect my opponents. It takes a lot to get into the cage.”

It does, and De Castro wants to get in there as much as he can.

“My goal is fighting four times a year,” he said. “As a heavyweight I don’t have to cut weight and I’m always in the gym, always training, and I want to make the most out of my UFC experience. I want to fight every three months and climb the ladder and do good things in the UFC.”

And have an Endgame with his own spin on it.