See Which Fighters Have The Quickest Turnaround Between Fights In UFC History.
By Gavin Porter, On Twitter @ItsGavinPorter • Oct. 26, 2021

On October 16, UFC strawweight Loopy Godinez made the quickest turnaround in UFC history by competing just seven days after her last UFC fight.

But before Godinez, there were quite a few other UFC fighters that made some quick turnarounds.

Look back at some of the fighters that threw caution into the wind and made the walk back to the Octagon faster than normal. 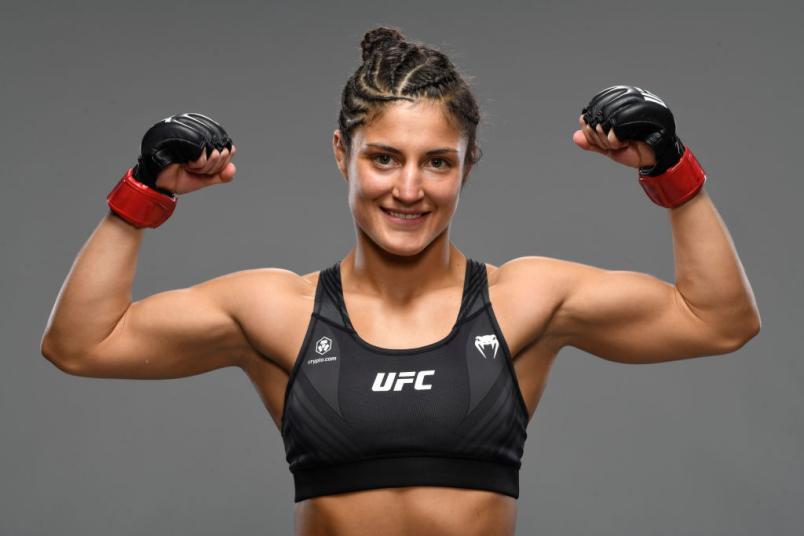 Loopy Godinez made her initial UFC debut on short notice up a weight class from her home at strawweight, and even though she didn’t get the result she was hoping for in that fight, her willingness to take big time opportunities was established.

So when Godinez’s phone rang with the chance to fight again just a handful of hours after her first-round armbar submission win on October 9, she wasn’t going to say no. Godinez accepted a flyweight bout with Luana Carolina on October 16, and while Godinez failed to pull off the victory, she definitely earned the respect of many fans and set the record for the quickest turnaround in modern UFC history.

One of the fighters that burst onto the scene last July when the UFC Octagon landed on the shores of Abu Dhabi was Khamzat Chimaev.

After Chimaev defeated middleweight John Phillips, he asked UFC President Dana White for another fight since he felt like he didn’t take any damage and he was already on UFC Fight Island. The boss obliged and offered him a bout at welterweight against Rhys McKee. Chimaev would go on to TKO McKee and display a well-rounded skill set that captured the attention of UFC fans around the world.

That’s the magic of a quick turnaround, as in the span of 10 days, Chimaev was able to notch two dominant victories, one by submission and one by TKO, and established himself as one of the must watch fighters in the UFC. 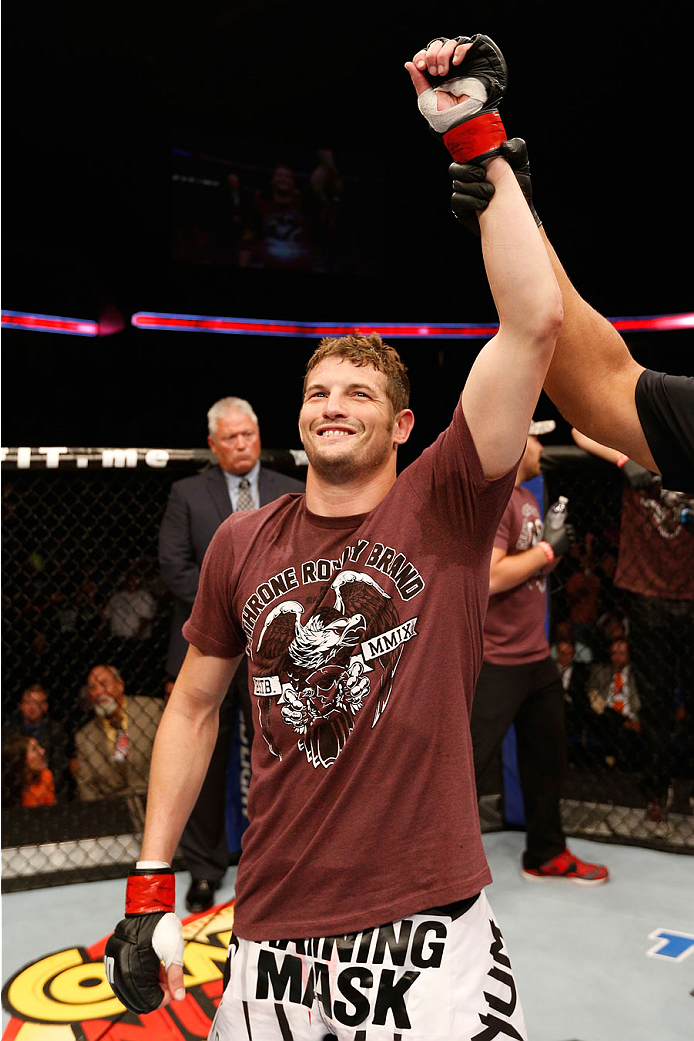 TULSA, OK - AUGUST 23: Chas Skelly celebrates after his submission victory over Tom Niinimaki of Finland in their featherweight fight during the UFC Fight Night event at the BOK Center on August 23, 2014 in Tulsa, Oklahoma. (Photo by Josh Hedges/Zuffa LLC/Zuffa LLC via Getty Images)

In 2014, Skelly was able to secure a rear naked choke victory over Tom Niinimaki just over the midway point of the first round. “The Scrapper” felt like he was healthy and ready for a quick turnaround, so the UFC set him up to face Sean Soriano just 13 days later.

Skelly responded to the challenge in a big way, defeating Soriano by unanimous decision and setting the record (at the time) for the quickest turnaround between fights in the UFC.

Four fighters made the two-week turnaround, but only Sean Strickland was successful in his attempt to earn two victories. Strickland defeated Jack Marshman in an entertaining standup slugfest before knocking Brendan Allen out in a catchweight bout last November.

The back-to-back victories helped Strickland gain momentum in 2021, where he has defeated Krzysztof Jotko and Uriah Hall by Unanimous Decision. 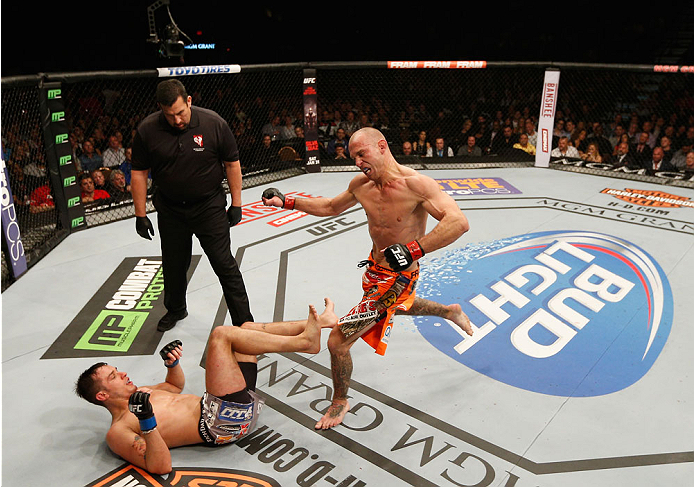 The one and only “Cowboy” Cerrone has been known to take short notice fights, and back in 2015 he executed it to perfection.

Cerrone defeated Myles Jury by unanimous decision at UFC 182 and was ready to go to battle again just 15 days later with former UFC lightweight champion Benson Henderson. Cerrone would come out of that fight victorious and continue his bid for a crack at the UFC lightweight title.

The Quickest Turnarounds for Fighters In UFC Main Events

Former UFC Flyweight champion Deiveson Figueiredo found himself on a short list for the 2020 Fighter of The Year thanks to a handful of masterful performances. His incredible year started with a controversial win over Joseph Benavidez in February, which he corrected by submitting Benavidez when the two met on UFC Fight Island in July and claiming the Flyweight title.

Figueiredo’s first defense came at UFC 255 when he headlined the PPV event against Alex Perez. “Deus da Guerra” pulled guard and snatched Perez’s neck early in the first and was able earn his first title defense without much adversity.

That’s when the UFC called asking him if he wanted to headline UFC 256, just 21 days later, in a bout with flyweight contender Brandon Moreno. There was no choice but for Figueiredo to say yes and go for history. He and Moreno would go on to put on an absolute classic from start to finish, with the fight ending in a draw. The bout was so good that it was an instant Fight of the Year contender.

And while Figueiredo didn’t win, he set the record for the fastest turnaround for a fighter headlining a UFC event. 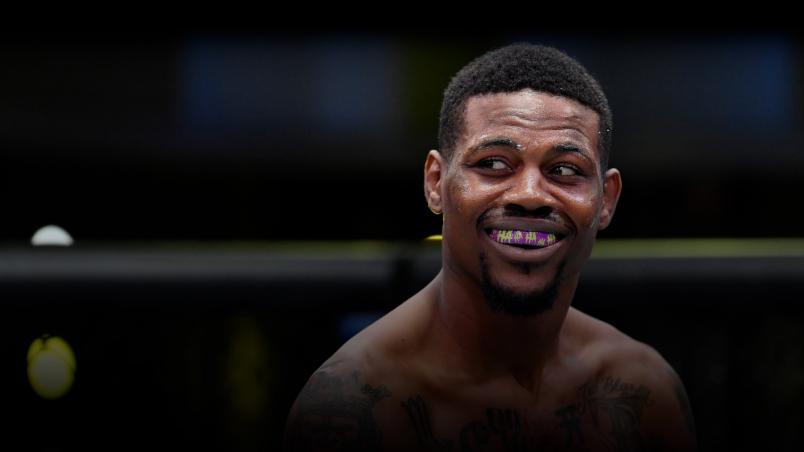 Middleweight Kevin Holland is known for a couple of things, two of which are his passion for talking and his passion for competing. In the early part of 2021, Holland did plenty of both, as he fought Derek Brunson and Marvin Vettori in main events 21 days apart.

Both fights didn’t go well for Holland, but he the fan favorite fighter showed heart and vowed to use those two experiences to bounce back in a big way.