Antonio Rogerio Nogueira is a man of his word.

Ahead of each of his last two appearances inside the Octagon, I have asked the Brazilian light heavyweight if the fight before him could be his last. Each time, the man known throughout his career as “Little Nog” told me he wanted to fight a little longer.

Prior to his bout with Sam Alvey in September 2018, he said he would like to fight for two more years. Last year, as he was readying to face Ryan Spann at UFC 237 in Rio de Janeiro, he made it clear that he still had a little more fight left in him, suggesting that he would hang up his four-ounce gloves following one more appearance in 2020.

And that’s exactly what the 44-year-old Nogueira will do following his fight with countryman and long-time rival Mauricio “Shogun” Rua this weekend in Abu Dhabi.

“I think I’ve had a good career in this sport, and now I think there is a new generation in Brazil and it’s a good time for them to show good things to the fans,” he said as he started to explain why he has finally decided to call it a career.

Nogueira was part of the vanguard of Brazilian stars that rose to prominence in the early part of the 2000s while competing in Japan, where many of the best performances of his career took place, including his first meeting with Rua in the quarterfinals of the 2005 PRIDE Middleweight Grand Prix. 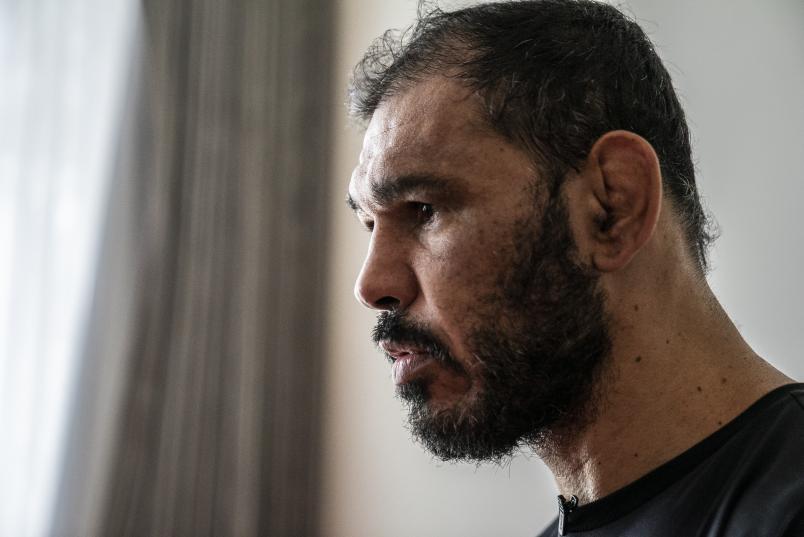 “For me, when I started to fight in Japan, it was a dream,” he explained. “I had a dream to see the sport grow in Brazil, and I think it has really grown in Brazil. We are the second biggest sport in Brazil, I think, and it’s growing a lot. People recognize the sport in Brazil, they recognize the athletes in the streets, and for me, it was very good to be a part of this — me, my brother, Wanderlei Silva, Anderson Silva, our generation.

“I think the new generation has been working a lot and the guys are at a very high level, so it’s nice to stay there with the new generation and survive this long,” he added. “Me and Anderson Silva are the only guys from the old generation that have stayed in the UFC, where it’s very difficult to stay.

This weekend’s fight also represents a perfect opportunity for Nogueira to have the grand send-off a competitor of his stature deserves, as he will share the cage with Rua for a third time while getting the opportunity to compete on Yas Island for the first time.

“I respect him a lot — he’s a great champion, one of the best athletes in this sport,” he said of Rua, who won each of their first two meetings by unanimous decision, including their Fight of the Night tilt at UFC 190. “We’ve had two fights that were very close decisions — I thought the second one I won, but the first one was, for me, my best fight in this sport.

“It’s a big pleasure to share the cage with this guy because I respect him, but I’m coming to win, for sure. 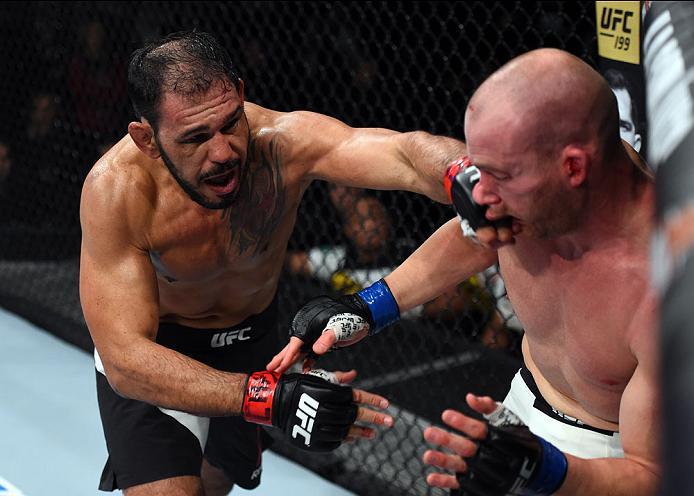 “It’s also a very big honor to fight here because I come here two, maybe three times a year, maybe more, and I like this place,” he added of competing in Abu Dhabi.

The veteran opened a Team Nogueira facility in Dubai a handful of years ago, and last week, the team’s head Muay Thai instructor, Mounir Lazzez, made a splash in his Octagon debut, collecting a unanimous decision victory over Abdul Razak Alhassan.

“I have a lot of friends here, a lot of students; it’s my second home,” Nogueira continued. “It’s a very special place to fight. I like the idea of fighting there for the first time.”

For the last five years, the Brazilian icon has been flying solo as he prepared for his trips into the Octagon, but for the first dozen years of his career, Nogueira had his twin brother Rodrigo by his side at all times.

They competed together on the same card six times during their careers — four times under the PRIDE Fighting Championships banner in Japan and twice in the UFC, including UFC 190, where Rodrigo lost to Stefan Struve in the final bout of his career.

“I’m really lucky to have a twin brother like Rodrigo because we stuck together and we always competed every day to be the best,” he said, reflecting on having his brother by his side throughout his mixed martial arts journey. “When I trained bad and I came to Rodrigo, he tried to fix me — my technique, my mind — and every day I did my best to show him that I have a big heart like him.

“It was very good and I was very lucky to have him by my side.” 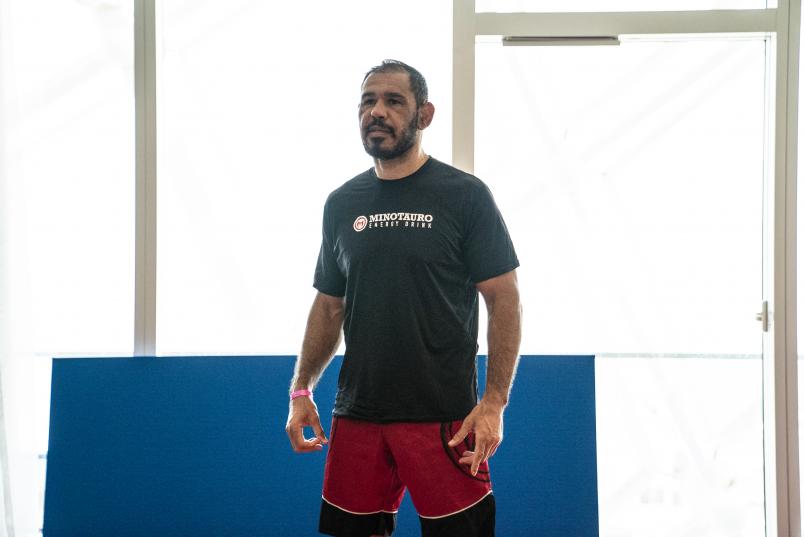 But as much as he enjoyed embarking on this journey alongside his brother and sharing the card with him on two occasions in the UFC, neither of those events stand as the moment Nogueira considers the best of his 19-year, 34-fight career.

“I think the best moment in my career was when I fought in the UFC for the first time, my debut,” he said of his UFC 106 encounter with fellow Brazilian Luis Cane in November 2006.

Though he arrived on a five-fight winning streak, there were questions about where Nogueira would fit in the bustling light heavyweight division. On top of that, Cane was on a nice little run of his own, bouncing back from a disqualification loss in his Octagon debut with three straight victories, including a second-round stoppage win over Rameau Thierry Sokoudjou, who burst onto the scene less than two years earlier with a knockout win over Nogueira at PRIDE 33.

Roughly 90 seconds into the contest, Nogueira connected with an overhand left that buckled Cane and sent him running to safety. When he finally set his feet to engage again, Nogueira found a home for the same blow two more times before ultimately dropping him with one final clubbing left hand.

“I earned a win and it was so very good for me because I just moved to the new rules, new cage; everything was different,” he continued. “When I came there, I proved for my fans that I have a place in the UFC.”

Injuries were always an issue with Nogueira, and limited him to just a dozen appearances inside the Octagon ahead of this weekend’s third meeting with Rua, but you knew that every time he sauntered out to the cage with “Da Rockwilder” pumping through the arena’s sound system, the respected veteran was going to give his all.

He shared the Octagon with a trio of former titleholders, a few young upstarts as they rose to become contenders, and a couple other additional tough outs along the way, amassing six victories and four post-fight bonuses, all the while adding to his reputation as a consummate professional and respected elder statesman of the sport. 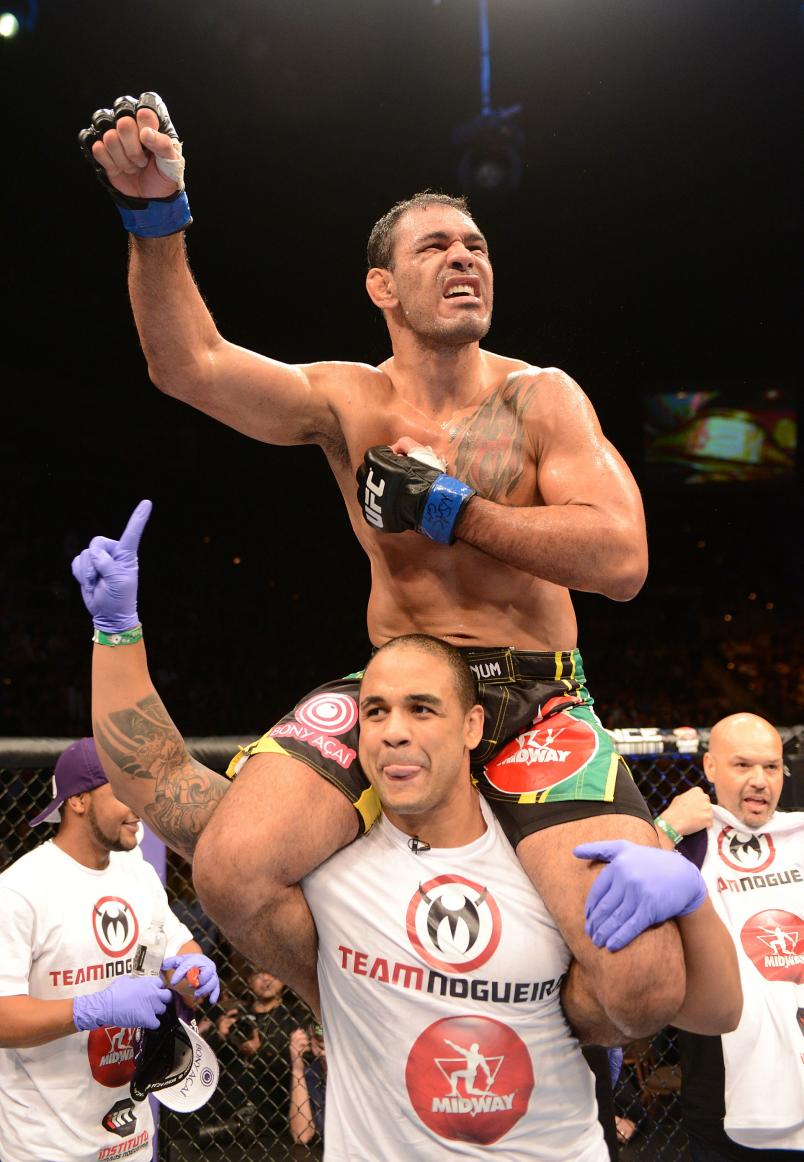 Antonio Rogerio Nogueira (top) reacts to his victory over Rashad Evans during their light heavyweight fight at UFC 156 on February 2, 2013 at the Mandalay Bay Events Center in Las Vegas, Nevada. (Photo by Donald Miralle/Zuffa LLC)

Saturday in Abu Dhabi, he’ll make the walk one last time to meet a familiar foe inside the Octagon before shifting his focus to helping the next generation try to reach the same lofty heights he, his brother, and the rest of their generation of Brazilian pioneers reached over the course of their careers.

“Now I will coach the athletes; I will start to focus on my team and my coaching career,” Nogueira said of his post-fighting career. “I’m going to try to stay outside of the Octagon now.”

The Brazilian legend let out a short, gravelly laugh.

“I know it’s going to be difficult, but I’m going to try.”