France's Fares Ziam Hopes To Extend His Winning Streak To Three And Continue His Rise In The Lightweight Division
By Zac Pacleb And McKenzie Pavacich • Feb. 24, 2022

Fares Ziam isn’t coming into his fight with Terrance McKinney to make any sort of specific point at UFC Fight Night: Vieira vs Tate, but he does know he’ll be a better fighter than he was in his majority decision win against Luigi Vendramini.

Most importantly, Ziam feels healthy. When he fought Vendramini at UFC 263, he did so with a torn ligament in his knee. This go-round, however, Ziam has a relatively clean bill of health. Although some athletes might see this opportunity against McKinney as a sort of chance to “bounce back” in a way, Ziam just wants to increase his standing in the vaunted lightweight division.

“It’s just a fight,” Ziam told UFC.com during his fight week in November. “I think Sean Shelby made this fight because it’s a very good matchup so, for me, it’s good. I want to win, of course, because I want to go up, so let’s go.” 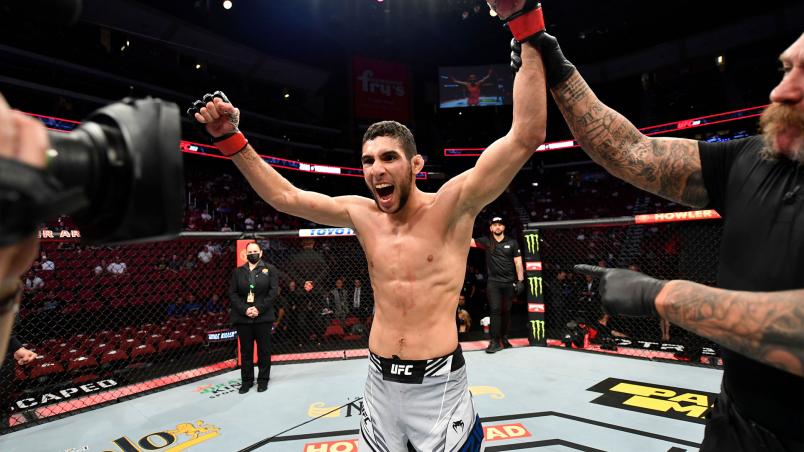 The pieces had all fallen into place for what was set to be an exciting matchup between the "Smile Killer" and McKinney, who also has all the pomp and circumstance of someone who can really make a name for themselves in the division.

But after making weight and fulfilling all of their fight week responsibilities, Ziam woke up to a call from the matchmakers the morning of his fight, letting him know that one of McKinney's corners had tested positive for COVID and their fight would no longer be taking place.

"When the fight was canceled, honestly, I cried," Ziam said, laughing. "I want to fight. I want to grow up, be a champion one day, so in order to do that, I need to fight."

Despite the initial disappointment of their highly anticipated matchup falling through, the Frenchman was able to find the silver lining in their situation.

"I learned from it. You never know what will happen tomorrow, you just never know. So for me, I said, 'Alright, I don’t fight, but it’s okay. I have more time for preparation, it’s good.' I had my show money and more time to prepare."

So Ziam packed up and headed back to Florida to resume training at Sanford MMA for a few more months — something that's truly been a catalyst in his climb. Having watched head coach Henri Hooft’s fights when he was growing up, he was well-aware of the coach’s kickboxing prowess.

Ziam had previously had a coach reach out to the group, and the rest took care of itself. Other than the lessons he is learning under Sanford’s array of coaches, including Hooft and wrestling wizard Greg Jones, Ziam is appreciating the quality of partners on the mat as well. 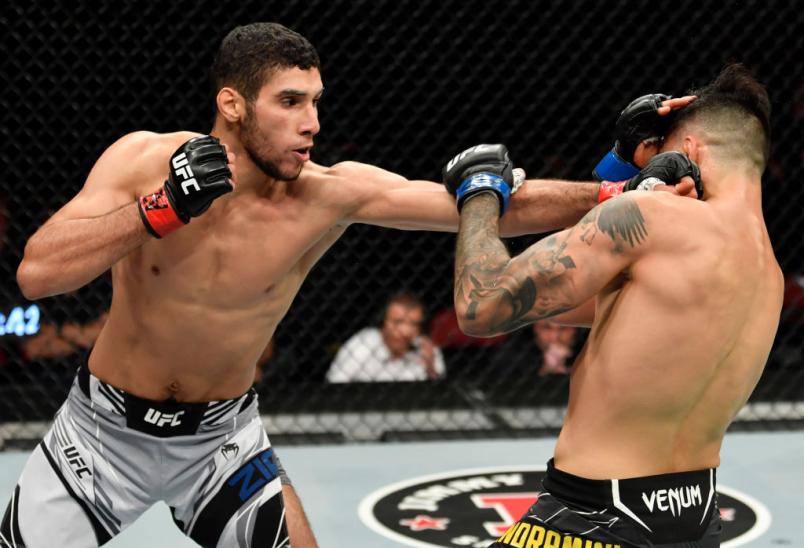 Fares Ziam of France punches Luigi Vendramini of Brazil in their lightweight fight during the UFC 263 event at Gila River Arena on June 12, 2021 in Glendale, Arizona. (Photo by Jeff Bottari/Zuffa LLC)

This little setback just gave Ziam more time to learn from some of the most influential technicians in the game.

In terms of the matchup, Ziam expects McKinney to come out quickly. Nine of McKinney’s 10 professional wins have come in the first round, and when he made his short-notice debut against Matt Frevola at UFC 263, he only needed seven seconds to earn the finish.

Although that’s certainly an intimidating proposition, Ziam is confident he can weather the early storm and find his own traction in the Octagon afterward.

In his training camp, Ziam said he focused on wrestling and striking because that’s where he thinks McKinney has confidence. He didn’t spend too much time on the grappling aspects, but he does expect a fun, tough test in the other two departments.

McKinney has said he’s a little confused as to why he’s the underdog to Ziam, focusing on the lack of finishes on Ziam’s record compared to his. Ziam doesn’t take much umbrage with that point, though. He’s focused on getting the results, which includes getting past McKinney on November 20. As far as after the fight, Ziam does have his eyes on Paddy Pimblett because the two share wins over Vendramini, but first comes the business on fight night.

“I want to knock (McKinney) out because he is not a really good striker,” Ziam said. “He has power, of course. He’s aggressive, but he never fought a guy like me.”