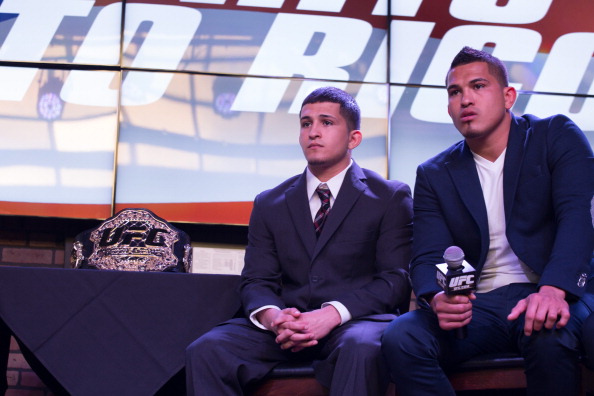 March 14, 2015 was a date the Pettis brothers, Anthony and Sergio, probably circled on their calendars as a reminder that they were never going to fight on the same card again. On that UFC 185 card in Dallas, Anthony lost his lightweight title to Rafael dos Anjos and Sergio was stopped by Ryan Benoit, and you assumed the two wouldn’t want to go down that road again.

But here they are in Las Vegas, Anthony fighting Edson Barboza and Sergio taking on Chris Kelades on this Saturday’s UFC 197 event. So what happened to the never fighting together thing?

“That was the initial feeling after that fight,” Anthony said. “He lost, I lost and we said ‘Yeah, let’s not do that again.’ But what it comes down to when I think about it, a fight’s a fight. It doesn’t matter what happens to him or what happens to me. Whatever is supposed to happen is already there, so it’s preparing together and cutting weight, and I like doing camps with my little brother.

“We have a good time. We were both out in New Mexico grinding, and we were missing home, but having a good time training.”

Now it’s time to fight, and while Sergio, 22, is six fights into his UFC career and a star on the rise at 125 pounds, Anthony will always see him as his little brother. And that’s not a bad thing, as there is no one prouder of the flyweight prospect.

“I think I’m always big bro,” Anthony said. “He’s six years younger than me, so seeing his potential and seeing how much room he has to grow is amazing to see. I’ve had my nine years in this sport and I’ve seen how good I’ve gotten in nine years, and I can’t wait to see how he’s looking at 29 years old. It’s a cool thing to watch.

“This was a little kid who was scared of going outside and bugs,” he added with a laugh, “and now he’s over here fighting grown men in the Octagon.”

And winning. Just like big bro, who is happy that in the midst of this sport’s craziness, he’s got family to share it the experience.

“That’s what it’s all about for me, making these memories,” Anthony said. “When it’s all said and done, these are the things that I think I’m gonna miss the most, not the glitz and the glam and all that stuff. I get to share this with my little brother. We’re both thinking about fighting another human being, and going through it together is a really cool thing.”