Daniel Cormier’s breath tumbled from his mouth, like the mist spraying off an avalanche, on a frigid February morning in the dead of winter in Buffalo, N.Y. The whites of Anthony Johnson’s eyes were barely identifiable as the Herculean light heavyweight battled the elements alongside his UFC 210 adversary.

Yes, it was frigid in upstate New York, but Cormier and Johnson defied the elements as they spent a day side-by-side for an all-day media tour, their second in three months. The two will battle for the UFC light heavyweight championship on April 8 at KeyBank Center after their original rematch, scheduled for December in Toronto, was postponed after DC suffered an injury in training.

Tickets are on sale now but they're almost gone. Get yours for UFC 210 in Buffalo, N.Y. on April 8

Cormier, a New Orleans native-turned-Californian, and Johnson, a Georgia boy who now calls Delray Beach, Florida home, don’t see eye to eye when it comes to whom will win the rematch. But both men found common ground in their disdain for the sub-freezing temperatures of a city that otherwise endeared itself to them.

Operating on about four hours of sleep, Cormier dug in his heels and prepared for a full day of interviews.

The champion was cordial with Johnson. During the first few interviews, the two answered questions in a business-like manner, allowing the coffee to infiltrate their systems and breathe life into their tired, chilly bodies.

Known as the “King of the Grind” inside the Octagon, outside of it Cormier is a playful prankster – a kid at heart. Friends and family have learned to be on guard around DC, who waits until his victims fall asleep before attacking with a fishhook to the lip or a gentle wake up smack. 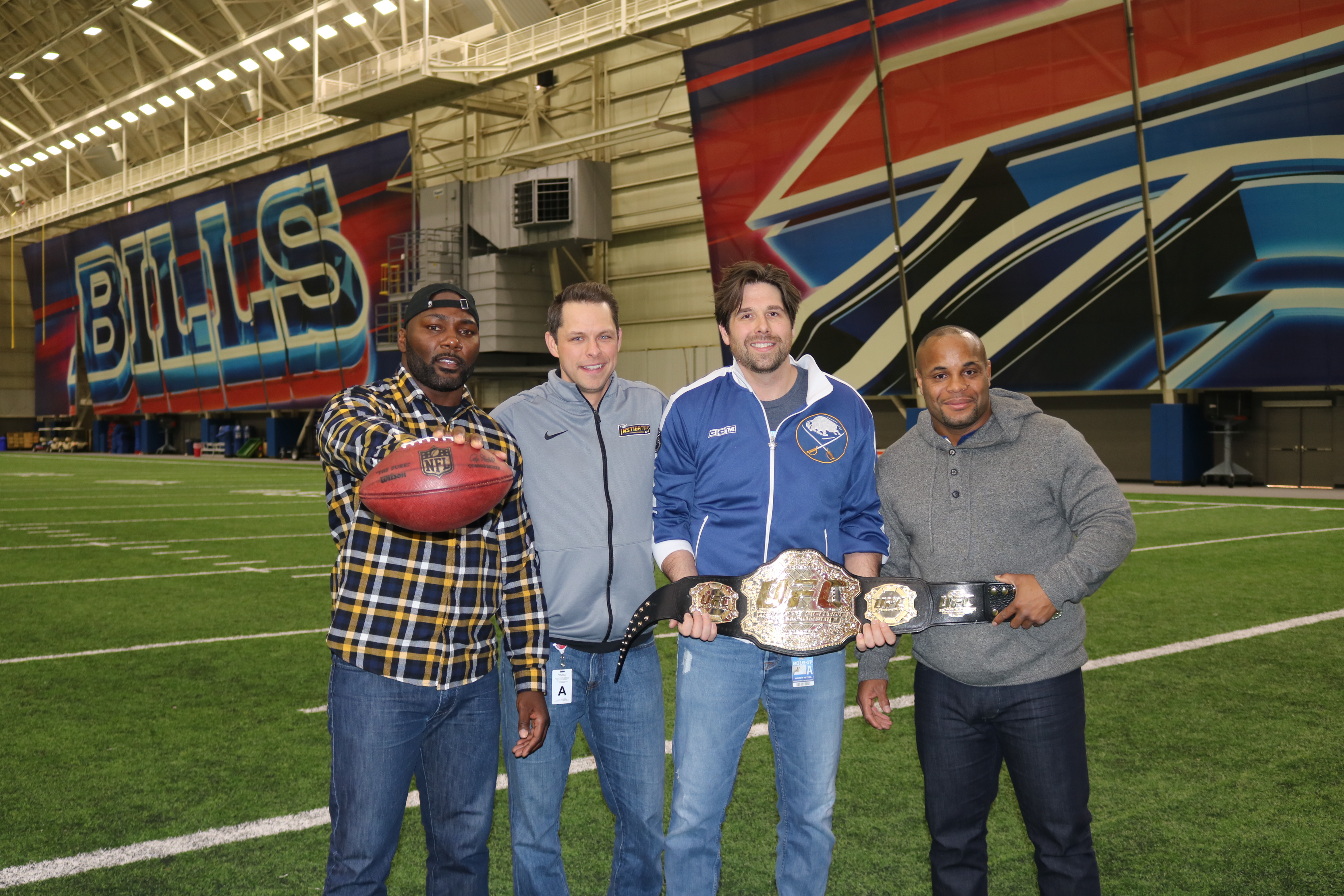 Johnson arrived before Cormier to Buffalo, allowing the title challenger time to attend a NHL hockey game between the Buffalo Sabres and Colorado Avalanche. Rumble met Sabres legend Dominick Hasek and sat in the Owners’ Suite to watch his first-ever professional hockey game. He put on a Sabres hat and didn’t take it off again until he boarded a plane to depart the “Queen City.”

The next morning, radio hosts and television producers were stunned to see Johnson in the cap and a blue and gold dress shirt, the very colors of the hometown team. He had seemingly become the toast of the town overnight.

“(Daniel) ain’t representing, so don’t support him,” Johnson joked, pointing at Cormier who was wearing a plain black and white hooded sweatshirt.

Cormier was on to Johnson’s scheme and began devising his own. The prankster’s wheels were turning.

During the first stop the pair signed autographs for a group of fans, winners of a meet-and-greet contest conducted by the radio station. Cormier grabbed the pen first and started signing. When Johnson moved to grab it, DC flung it to the ground and walked away, cackling.

During our last interview I decided @anthony_rumble didn't get a chair. He needed to stand. I'm the champ I make the rules lol. @ufc 210 tickets going fast get em now. #buffalo #andstill
A post shared by Daniel "DC" Cormier (@dc_mma) on Feb 17, 2017 at 7:16am PST

Before one interview, DC rushed to the only open seat in the room in front of a microphone, forcing Johnson to stand. Cormier posted a picture of the scene on his Instagram account.

Cormier needs to win; he needs to compete at everything.

Rumble has been in the process of climbing back to the top of the mountain for another crack at the championship. The last time he fought Cormier, he got out-worked by the cardio machine. All the power in the world is useless if that fighter doesn’t have the energy to use it.

“We both have busted our ass to get back to this situation and this position,” Johnson said. “Daniel beat me up last time, but I know what he has to offer now.”

Later in the day and with the end of the media tour in sight, Cormier staged one final trick. The champion had received a plush bathrobe embroidered with his last name on the back, a gift from the Marriott hotel. Not knowing if Johnson had received one of his own, he had the robe brought out to him during a TV segment, and used the opportunity to gloat and revel in his champion status.

Little did DC know that Johnson simply left his own robe back at the hotel.

But that didn’t matter. Cormier has forged his own reality, one where he is king.

“In my world Anthony Johnson can’t beat me,” Cormier said. “I’m a grinder and I’m a worker. I’m going to go in there and implement my game plan. I just feel I have the right kind of style for Anthony.”

Johnson feels like an improved version of the man who lost to Cormier. He knows what the champion can do and he’s prepared to be ready for him this time around.

The talk is just talk for Rumble, but he’ll use Cormier’s pranks as motivation.

“He hasn’t said anything yet to make me snap his neck, so everything is cool,” Johnson said. “We’re professionals so there’s no use of getting upset right now. But the things he says, I use it as fuel. He’s going to wrap that belt around my waist this time.”