The Faith of Yoel Romero

"I just want to do the best job I can with the opponent that is in front of me and whatever God wills will be." - Yoel Romero 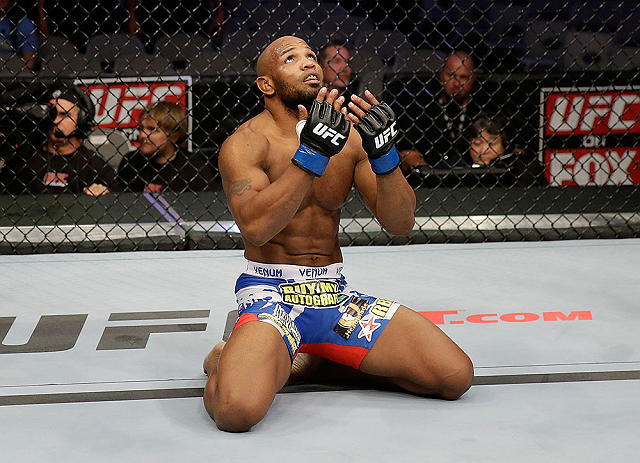 Middleweight contender Yoel Romero may fight like he’s double-parked, but despite being 37 years old, he’s not in a hurry to get to where he’s going – the 185-pound title.

“I’m in great physical condition and health so I want to take my time and make sure I get the training and experience required to be the best,” Romero said through translator / manager Tina Vidal. “But at the end of the day everything is in God’s hands.”

Unbeaten in four UFC fights, Romero is getting closer regardless, as the fight game has a way of taking on a life of its own. And when you blast through Clifford Starks, Ronny Markes, and Derek Brunson by knockout and add a decision win over Brad Tavares, the Romero Train is speeding up and getting ready to slam into the title picture sooner rather than later. How soon? Try Saturday’s UFC 178 bout against fellow top ten contender Tim Kennedy.

“I know it will increase my ranking to probably around top five,” Romero said. “I just want to keep proving myself to Dana (White) and Joe (Silva) and continue to receive the amazing opportunities that they have given me so far.”

It’s a far cry from where Romero came from, so you can understand his gratitude for making it to this point. But nothing has been given to the “Soldier of God,” a native of Pinar del Rio, Cuba. Living in a country known for its renowned amateur boxing program (and which produced his brother, current IBF cruiserweight champion Yoan Pablo Hernandez), the athletically-inclined Romero took the road less traveled, which meant wrestling, not boxing.

“I love wrestling and I like that I can continue to use that and mix in boxing in MMA,” he said.

Romero didn’t just love wrestling; he was good at it. So good that he won an Olympic Silver medal in it in 2000. Next up was a move to Germany, and then the United States. By then, he was 4-0 in MMA, but in his U.S. debut in Strikeforce in 2011, he was knocked out by Rafael “Feijao” Cavalcante.

He hasn’t lost since. And though there are dozens of stories chronicling Cuban combat sports athletes who have come to the United States and lost their mojo and focus, Romero isn’t one of them.

“My faith in God keeps me focused and grounded,” Romero said, clear in his intent that everything he’s doing isn’t just for himself, but his family as well. “I still have a lot of family in Cuba and they are all so happy and excited for my success and progress.”

The key to Romero’s run thus far has been his calm under pressure. Sure, he can knock an opponent out with either hand or put them on their back with a blast double leg, but being able to handle life is sometimes more important. That includes dealing with being away from his family, facing the best in the world night in and night out, and being directly in the spotlight the UFC provides. For that end of things, being an Olympian didn’t hurt.

“Because of the Olympics I received a lot of media training and experience in front of the cameras, so I was better prepared to handle everything the UFC requires in that aspect,” Romero said.

If it sounds like all of Romero’s ducks are in a row heading into such an important and possibly life-altering bout, that may be the case, but he looks at Kennedy as just another opponent and just another fight.

“I don’t think about it like that,” he said. “I just want to do the best job I can with the opponent that is in front of me and whatever God wills will be.”