"Everyone that fights in the UFC wants to fight for the belt, and I’m sure my time is coming." - Fabricio Werdum 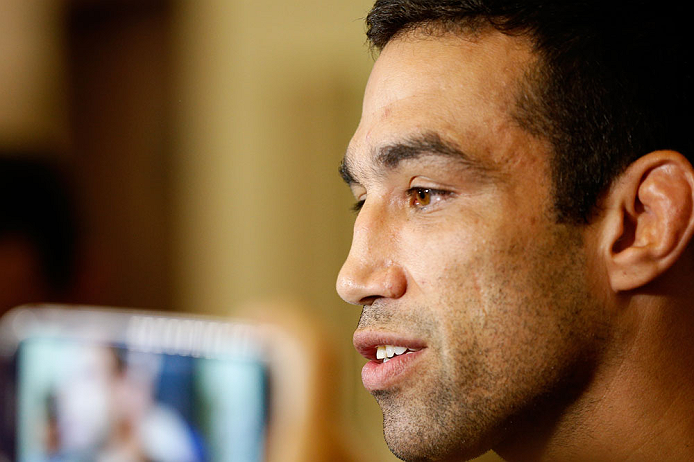 After a long training camp, countless sacrifices, and the mental gymnastics that go along with knowing that you’re facing an opponent training to beat you – literally - there’s no feeling in mixed martial arts like winning. And if you do it at home, in front of thousands of fans cheering your name, you can amp that feeling up tenfold. Just ask Fabricio Werdum.

“It was amazing, I have no words to describe how happy I was for that fight,” said Werdum of his UFC 147 win over Mike Russow last June, a victory that marked his first bout in his home country of Brazil since 2004. “People were singing my name and supporting me all the time. I love to fight in Brazil, and I hope to see my fans singing "Vai Cavalo" again on June 8th.”

June 8, this Saturday, will be Werdum’s second consecutive fight at home, and this one has even more importance attached to it given that his opponent will be his Ultimate Fighter Brazil 2 coaching counterpart Minotauro Nogueira, a legend of the game that also has some previous history with Werdum, having defeated him back in 2006, when both competed in the PRIDE organization.

“When I fought Nogueira the first time, I was just in the beginning of my career,” said Werdum, who lost a unanimous decision. “It was a really tough fight but I think I did a pretty good job for someone that was fighting a legend in the sport.”

At the time of the PRIDE Openweight Grand Prix quarterfinal, Werdum was a veteran of just ten fights, albeit ten fights that included bouts against Gabriel Gonzaga, Tom Erikson, Sergei Kharitonov, John-Olav Einemo, and Alistair Overeem. Yet what was most notable is that back then, Werdum was strictly a ground fighter, with his standup attack far behind what he could do with his jiu-jitsu black belt.

That would change though, and after his rematch with Overeem in Strikeforce in 2011 and 2012 UFC wins against Roy Nelson and Mike Russow, he’s proven to have a more than serviceable striking game. That’s the kind of evolution you hope to see in a fighter, and it’s what he tried to get across as a coach on TUF Brazil 2

“It was a great experience, and we had the chance to exchange knowledge with the other coaches and fighters inside the house,” said Werdum. “I think I gave as much I could to my team; I just wish we had a little more time to really teach them more stuff. But I’m sure a lot guys from that show will become UFC stars in the future.”

Admitting that coaching was as beneficial for him as it was for his team, Werdum now can set his sights on what may be the most important fight of his UFC career against a fighter who is also vastly different from what he was seven years ago.

“Now he (Nogueira) has more experience,” said Werdum. “He was already an amazing fighter when we fought the first time, and for sure he has been training a lot for this fight and improving every aspect of his game.”

The respect is mutual and obvious, especially from Werdum’s side. This is no time to be looking past one of the most resilient fighters ever to put on the gloves, especially with so much as stake. How much? Well, a win by Werdum would likely put him in the conversation for a world title fight.

“I hope so,” said Werdum. “(UFC President) Dana (White) said that he was going to give me a shot. Everyone that fights in the UFC wants to fight for the belt, and I’m sure my time is coming.”

And while a Werdum bout against current champ Cain Velasquez would be an intriguing one, an even more interesting title fight would be Werdum in a rematch against the last man to beat him in the Octagon, Junior dos Santos, should dos Santos regain the belt in his rubber match with Velasquez.

“They are both great fighters, and we saw that the fight can go either way with them,” said Werdum when asked about Velasquez-Dos Santos III. “It depends on who will be able to apply the strategy on that day.”

But will he be rooting for dos Santos?

“I want to fight for the belt,” he said. “Today, Velasquez is the champion. But right now my focus is only on Minotauro.”

And that’s where it should be, but it doesn’t hurt to speculate on what would happen if an All-Brazil heavyweight championship fight took place in Brazil, right?

“Brazilians are passionate fans and they are supporting the UFC a lot,” said the 35-year-old from Porto Alegre. “So I think our fighters that are representing Brazil in the UFC are showing that Brazilians have a lot of desire, heart, and energy to reach their goals. If we have an All-Brazilian heavyweight title fight, for sure the country will be excited to watch what's gonna happen.”

Check out what started it all in Nogueira vs. Werdum 1.