"I'm very happy to be back, this is an opportunity that I was waiting for a long time and now I'm ready to take it." - Fabricio Werdum 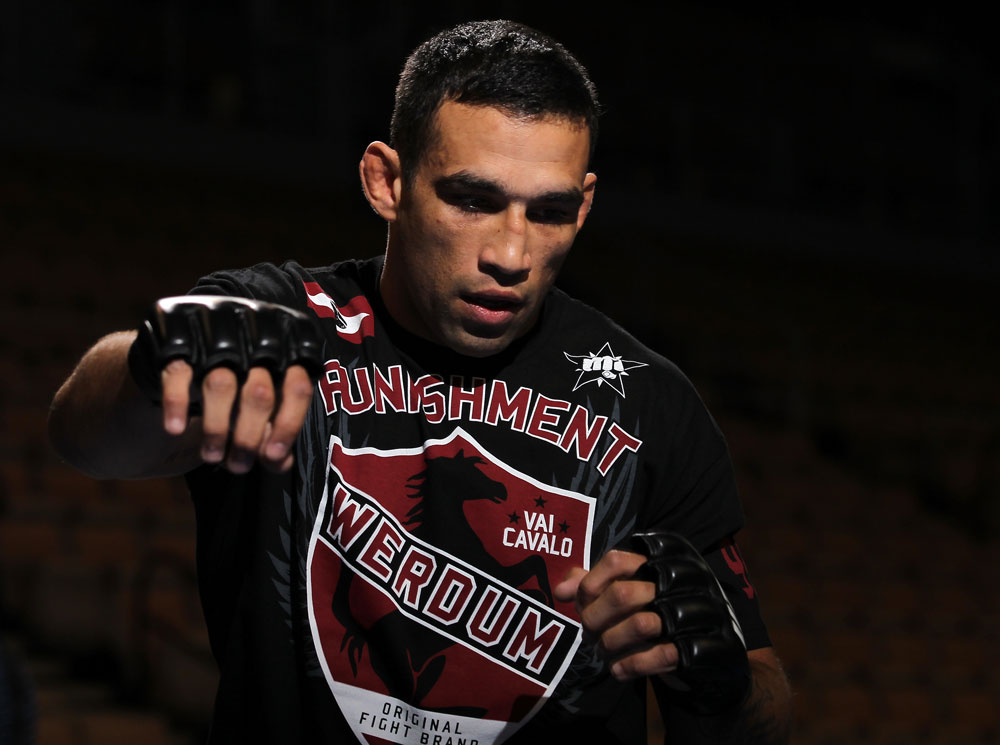 If your last impression of Fabricio Werdum is seeing him knocked out by future UFC heavyweight champion Junior dos Santos back in October of 2008, you’ve got a lot of catching up to do, and the Brazilian, who returns to the UFC this Saturday night to face off against Roy Nelson at UFC 143 in Las Vegas, will be the first to admit that he’s a changed man, in and out of the Octagon.

“Everything changed in my life,” said Werdum. “Now I'm with a stronger camp, I'm with my master (Rafael Cordeiro) and close to my family. That time was not a good time in my personal life, but now I'm 100% in every aspect.”

And that’s not just talk to explain away what, at the time, was a shocking defeat. Practically no one knew who dos Santos was when he made his UFC debut that night in Illinois, and Werdum, who was coming off back-to-back knockout wins over Gabriel Gonzaga and Brandon Vera, was widely considered to be one of the world’s elite heavyweights, But a single uppercut ended Werdum’s night at the 81 second mark of the first round, sending him out of the organization while propelling dos Santos up the ladder on the way to the title.

The loss easily could have signaled the start of a decline for the native of Porto Alegre, Brazil, but instead, he got back in the gym and began reinventing himself, eventually winding up in Southern California with former Chute Boxe guru Rafael Cordeiro. By 2009, Werdum had signed with the Strikeforce organization, debuting in August of that year with an 84 second submission win over Mike Kyle. Three months later he decisioned countryman Antonio “Bigfoot” Silva, but it wasn’t until June of 2010 that he made the MMA world sit up and take notice again.

That night at the HP Pavilion in San Jose, Werdum needed just 69 seconds to hand the seemingly unstoppable Fedor Emelianenko his first loss in nearly a decade, and what many considered the first legitimate defeat of the Russian’s fabled career.

A June 2011 matchup with a man he defeated in 2006, Alistair Overeem, followed, and though he lost a unanimous decision to the current number one contender, he showed that he could stand with a former K-1 Grand Prix champion and even hold his own. It’s something the decorated Brazilian Jiu-Jitsu black belt is proud of.

“I'm training everyday with my master Rafael Cordeiro, a few months ago I got my black belt in Muay Thai, and I'm ready to strike the whole time if I need to.”

And though he was doing well in Strikeforce, Werdum always felt that there was unfinished business for him in the UFC, and he expected that one day, he would get a call back to the Octagon.

“That was one of my biggest motivations to train every day,” he said, and soon, his patience would pay off as he got re-signed to the promotion and tasked with facing Nelson this Saturday.

“Every fighter that is part of UFC is here for some reason,” said Werdum. “Roy Nelson is a good boxer and good grappler, but I'm ready for him and to prove my value in the Octagon. I'm very happy to be back, this is an opportunity that I was waiting for a long time and now I'm ready to take it.”

Frankly, the timing couldn’t be any better for “Vai Cavalo,” as a win over “Big Country” will likely shoot him straight into the title picture, where currently two familiar faces – dos Santos and Overeem – are preparing to battle it out for the belt later this year. So, any pick from the fighter who may know them better than most?

“For sure it will be a great fight for the fans,” said Werdum. “They are both top fighters and I'm excited to see both of them back in the Octagon in the near future.”

Okay, that didn’t work out. How about this: any preference for an opponent, should he get a title shot soon?

“No, I just will look for my title shot against anyone that will be in my way. This is a very good division, with so many good fighters, and I will look for my spotlight and my way for the title.”

Well, for what Werdum lacks in calling out opponents, he makes up in fighting skill, and at 34, the Brazilian veteran feels better than ever as he makes his welcome return.

“I'm feeling faster and stronger, with more skills and experience, and I’m ready to go. The fans should expect a great show, and for sure a new and very hungry Werdum, ready to put a show on for them.”