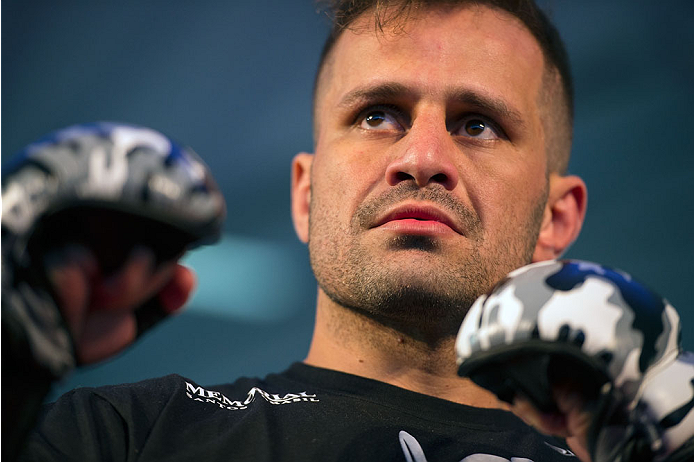 Fabio Maldonado is no politician. That much is clear by watching him in the Octagon. He shows up, puts his gloves on, fights, and picks up his check. It may sound simple, but in combat sports, it’s not always as cut and dried as that, and few know that better than the Sao Paulo native, who once compiled a 22-0 pro boxing record that included 21 knockouts.

Now let’s put that in perspective. Brazil is not known for being a hotbed of boxing, though it has produced world-class competitors such as Eder Jofre and Acelino “Popo” Freitas over the years. And when Freitas did reign, he wasn’t just a champion, he was a national icon. If Maldonado would have done that as a heavyweight, the possibilities were endless. But after a 2010 win over Carlos Barcelete, he switched to vale tudo gloves exclusively.

“I loved to fight boxing,” Maldonado said through a translator. “If a fighter wants to stand and trade with me, they'll have a boxing match with MMA gloves. I love boxing, but it's very ungrateful, very uncertain. When I signed with the UFC I had a boxing offer that would have paid me double of what I was getting and I'd fight (former cruiserweight champion) Jean-Marc Mormeck in France. But I opted for the UFC. It's a dream for me. I also had the dream to be a boxing world champion, but I saw the reality. In the UFC I would have three or four fights a year and be well paid. You know what you're getting and there's not that much politics involved. In boxing, there's too much uncertainty.”

Having that stability can take a lot of pressure off a fighter’s mind, and Maldonado isn’t one for having regrets (“I like things that happen in the moment,” he says). So for now, he’s all in as a mixed martial artist, and learning that, at 34, training has to be smarter, not harder.

“I describe it as very slow,” he said of his nearly four years in the UFC. “I want to recover the time I lost. Although I got into the UFC, I ended up training wrong due to my excitement of showing that I'm good and trying to be a champion too soon. I ended up training more than I should, over training and getting hurt in some sessions that were unnecessary. Today at 34 years old I think better about how to do my training, and that's what I think about the most.”

Owner of a 17-3 record when he got the call to the UFC to face James McSweeney in 2010, Maldonado won that first fight via TKO, but then lost three straight to Kyle Kingsbury, Igor Pokrajac, and Glover Teixeira. For most fighters, that would spell a ticket back to the minor leagues, but Maldonado got even more popular due to his aggressive style, iron chin, and ability to roar back from the brink of disaster on a consistent basis.

“I think that for everything in life you need to have courage, and I don't see MMA as a job more difficult than others,” he said. “Everything you do in life, to be a promoter, an announcer, a cop, everything in life you need guts to do it in some way or another. Some have difficulties in one way and others in another way. I have courage and I have kids to raise, and my great motivators are my father, who I tattooed on my back and Rocky Balboa.”

That Rocky-esque style kept him employed and built his fan base, but eventually, you have to get back in the win column, and Maldonado eventually righted his ship, decisioning Roger Hollett and Joey Beltran. Neither performance was vintage Maldonado, but hey, a win’s a win, and he knows that he can do better in the futute.

“Although I turned things around, I had fights where I could have done more,” he admits. “But the fear of being unemployed made me just win instead of finishing or hurting my opponents. To fight is my job, and in life you have to work. So I had to turn things around. I have two kids to raise, a wife, so I have to do it. I didn't study in my life; my studying is knowing how to fight, so I'll give the best I can in my life and I always have the support of my real friends in my camps. So that's what motivates me and that's how I knew I would beat Roger Hollett in Jaraguá (last May). I have great friends, and whoever has friends has everything.”

This Sunday, Maldonado is back home in Brazil to take on rising star Gian Villante. On paper, it’s a Fight of the Night candidate, even on a card headlined by the rematch between Dan Henderson and Mauricio “Shogun” Rua, and the Brazilian enters the bout with a lot of respect for the New Yorker, as well as a lot of confidence.

“He's a guy that has strong punches, good kicks, and good wrestling,” he said of Villante. “Those are great things. If I said only that, it would be unfair, as he's a great fighter. But I have a fight plan that I won't reveal, one that I planned with my team, and we'll do everything possible for it to work during the fight.”

“Two times in the past I thought they could have given me the win, but it wasn't the biggest robbery in history,” said Maldonado of his decision losses to Kingsbury and Pokrajac. “But I saw in these fights, and even in the victories after that, that I was decaying in practice. The first fight I showed I was good, and in my opinion the ones in which I was best physically were in my debut, versus Glover and versus Hollett. I had more resistance and everything, and two times I won. With Glover I got caught with a punch at the start of the fight and ended up paying the price for not knowing to take care of myself at the start of the fight. But I will turn things around; I don't know how far Gian Villante will go, but I promise that I will show much more than these last six fights. I'm better than those six fights.”

If Maldonado’s claims are true, a win over Villante could kickstart an eventual run toward the light heavyweight championship. That’s the plan for the former boxer, but he is willing to take the long road there. With one condition, that there is that chance for him if he keeps doing what he needs to do.

“I think that I will end up being the UFC champion, but not in 2014,” he said. “I'm only coming from two (consecutive) wins so far, but I will work for it. I’m working for the future, and my future isn't just 2014. I plan to do one more fight than last year, and I want to fight three times. As I said, my career has been progressing very slowly. I ended up hurt twice and had to abandon fights. So I expect to fight three times this year and get three victories. And ever since the beginning, my goal was the title. But I won't ask for it now if I get the win; there's no sense in that and I have to wait. But if I know that I will never be the UFC champion, I will ask the UFC to release me win or lose versus Gian Villante. I don't want to be in the UFC just to be one more on the roster.”

Motivated, experienced, and with fists and chin of iron. It’s the 2014 version of Fabio Maldonado, but as he insists, that’s not all you’ll see this Sunday.

“You can expect two things put together,” he said, “The improvement in my jiu-jitsu that Thiago Tavares made; ever since I've been with him I have not been submitted in jiu-jitsu practice. And violence. I'll be violent, strong, just like the Pitbull brothers are. I will embody these two things - I will have the best jiu-jitsu I've ever had with the violence of the Pitbull brothers, and I'll bring it to the Octagon. And then Gian Villante won't be able to hold up if I can put it all together. Everyone might ask if I will be able to do it, but I think I will. I think I will knock out Gian Villante on March 23.”