Fabio Maldonado Gets His Dream Fight 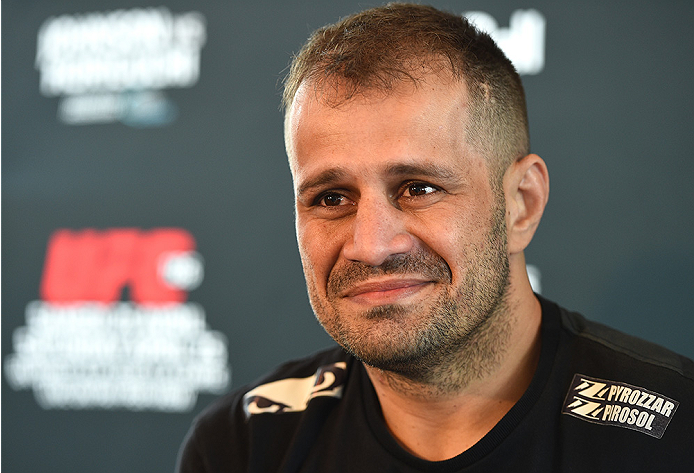 A week ago, Fabio Maldonado was unmoved by the reality of the moment, that his highly-anticipated UFC 186 co-main event against Quinton “Rampage” Jackson was off, with a bout on the same Bell Centre card against Steve Bosse moved from that lofty Pay-Per-View slot.

“The opponent doesn't really matter,” he said then. “What matters is that I will put on a big show. Of course I wanted the fight against Rampage to happen but I know that the UFC will give it to me in the future.”

It was as graceful an answer to be given in the midst of a difficult situation, and also one you would expect from Maldonado, a fighter’s fighter and one of those guys who would fight anyone at a moment’s notice.

Having said that, you hope that karma exists and those like Maldonado get their moment in the sun eventually, and today, “eventually” is just a day away, as Jackson is back in the UFC 186 co-main event bout after a court injunction against him was overturned on Tuesday.

Standing across from him in the Octagon on Saturday night? Fabio Maldonado.

“The desire to fight Rampage is just as strong as my desire to be Rocky Balboa when I was 10,” an ecstatic Maldonado said Thursday at the UFC 186 media day in Montreal. “I have wanted to fight Rampage since 2003. This is a dream come true.”

So whether it was Saturday or six months from now, the 35-year-old from Sao Paulo was used to waiting. But at least now it’s a full-blown reality. Back in 2003, Maldonado was just 2-2 in MMA and 6-0 in pro boxing. Not exactly the kind of resume that would interest someone like Jackson, who was having one of the best years of his career in PRIDE back in 2003.

But in 2015, Maldonado vs. Jackson isn’t just a reality, it’s an exciting one for fight fans who are expecting a slugfest this weekend. Maldonado expects one too, and he’s happy the fans are on board as well.

“It's a great feeling,” he said of the fan support. “I feel that my fights are exciting fights, and my focus was always on winning the fight and improving my performance, not on the opponent. But I do know his punches and know I need to be prepared.”

At 5-4 in the UFC, Maldonado’s Octagon record isn’t a sparkling one, but in his case you have to look beyond the numbers. One of those losses (to Kyle Kingsbury) was by way of a close decision some believed he won; another (to Glover Teixeira) had Maldonado on the verge of a knockout win before his foe roared back; and a third (to Stipe Miocic) came at heavyweight. Take away the loss to Miocic, and Maldonado would be unbeaten in his last four fights, with the most recent victory over Hans Stringer last October earning him Performance of the Night honors. Many believe it was his best UFC effort to date, but “Caipira de Aco” disagrees.

“I am actually better than I was in my last performance,” he said. “In my last fight I was definitely not one hundred percent.”

That’s a scary thought for those facing him in the future, including Jackson, and Maldonado can’t wait to finally get his 2015 campaign going.

“I want three more perfect fights facing top five fighters,” he said of his hopes for this year. “And the fans can always expect a great striking show.”