Fabio Cherant Is Ready For It All

Fabio Cherant Is Determined To Get His First UFC Victory When He Faces Carlos Ulberg At UFC 271: Adesanya vs Whittaker 2
By Thomas Gerbasi, on Twitter: @TGerbasi • Feb. 9, 2022

More accurately, it had him at no snow, and as he prepped for Saturday’s bout with Carlos Ulberg, the former resident of New England was ecstatic that he didn’t have to shovel.

“I'm not missing anything up there,” he said. “This is a great lifestyle I'm living over here.”

It’s not just the weather that sent him down the east coast. Instead, after a test run with the Sanford MMA squad in Deerfield Beach, he decided that he would make his home there for the time being.

“It's the gym that I wanted to go to,” Cherant said. “It was everything. The people there, the coaches - look at the names that are there. How could it not be a good fit for anybody?”

Well, not every gym is for everybody, but in Cherant’s case, while he got good work in New England that got him to the UFC, now that he’s at the top level of the sport, he needed to act accordingly.

“I needed change and I changed,” said the Brooklyn native who will still rep Wrentham, Mass. on fight night. “If you need change in your life, why not take a risk? If you're not ready to risk, what's the purpose of being in there?  I'm in the UFC, the biggest tank with a lot of sharks in there, and I have to be able to compete. Being in Massachusetts, it makes no sense training there when there's not a lot of big guys there.” 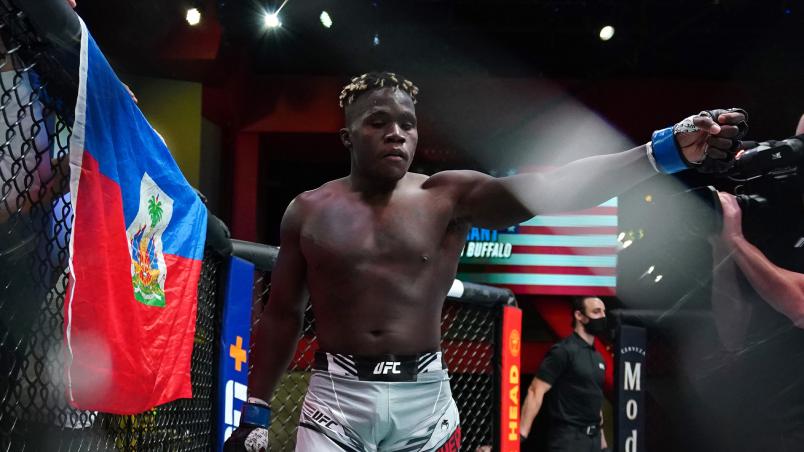 For a fighter with only ten pro bouts, the necessary evil is that while it’s great to get to the big show this early, each bout could put you in with an opponent with a lot more experience. In other words, there’s a lot of catching up to do.

“My whole career's been playing catch-up,” chuckles the 27-year-old, who made his pro debut in 2018. He doesn’t say it by way of complaint, but more matter of factly, as if this is the path he chose and he’s doing the best with it. So taking risks is part of the gig, and he’s fine with it.

“Look at my lifestyle, look at how I grew up,” Cherant said. “I came from nothing. Foster care, no parents, all of the above. I grew up with a very s**tty life.”

But here he is, refusing to use his formative years as a crutch to go in the wrong direction. Why?

“It just caught my interest,” he said. “I have no idea how to explain that to you. There's just something about it that I enjoyed and I wanted to run with.”

So he can’t sing or dance, then?

“No, I can definitely dance,” Cherant laughs. “I can't sing.”

Cherant can fight, too, even though he’s come up short in his first two UFC bouts against Alonzo Menifield and William Knight. This weekend he hopes the third time in the charm against Ulberg, who he actually holds the pro MMA experience edge on. Not that it matters to “The Water Buffalo.”

“I don't really care about people's experience,” he said. “I know he's a very, very good guy, he's a stud. He's got a lot of fights under his belt. I know his record in MMA, but he's got way more fights than that.”

Fair enough, but let’s get down to it - is this the fight where Fabio Cherant gets it right and leaves the Octagon with his hand raised?