Up-to-the-minute news about the TUF 17 Finale taking place Saturday, April 13. All bouts below have been verbally agreed upon.

With the Demetrious Johnson-John Moraga fight scrapped due to injury, April 13th's Ultimate Fighter Finale in Las Vegas has a new main event, as Urijah Faber will look to keep the momentum going from his UFC 157 win over Ivan Menjivar when he take on longtime bantamweight contender Scott Jorgensen.

Mighty Mouse Out of TUF Finale

The title hopes of the finale for The Ultimate Fighter's 17th season were dashed today when it was announced that UFC flyweight champion Demetrious Johnson is injured and unable to compete at the April 13th event. Johnson had been scheduled to defend his title against John Moraga.

A new main event will be announced in coming days.

In other news for that event, The Ultimate Fighter Live alumni Sam Sicilia and Venezuela's Maximo Blanco will go at it in a featherweight bout. 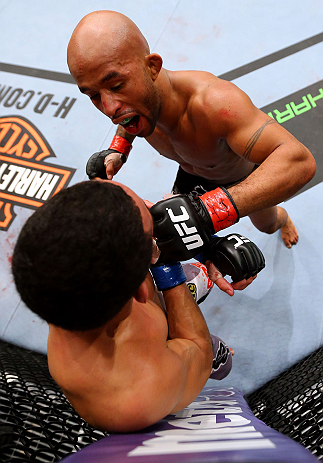 , but at this season's capper, set for April 13, there will be real UFC gold on the line as well: UFC flyweight champion Demetrious Johnson will defend his title against John Moraga. Johnson continues to impress and rise up the pound-for-pound ranks with each bout; while Moraga, looking for his ninth straight victory, has been stellar inside the Octagon so far with impressive stoppages in his last two outings.

The UFC's nascent women's division will have its sophomore scrap between two of its top athletes as former Strikeforce champion Miesha Tate takes on rising star Cat Zingano.

The big guys will also be represented on the fight card, with heavyweights Gabriel "Napao" Gonzaga and Travis "Hapa" Browne slated to clash.

Verbal agreements are in for all of the bouts listed. More information on finale, including the location, venue and ticket information will be announced in coming weeks on ufc.com.