Read on for UFC 194 prelim results 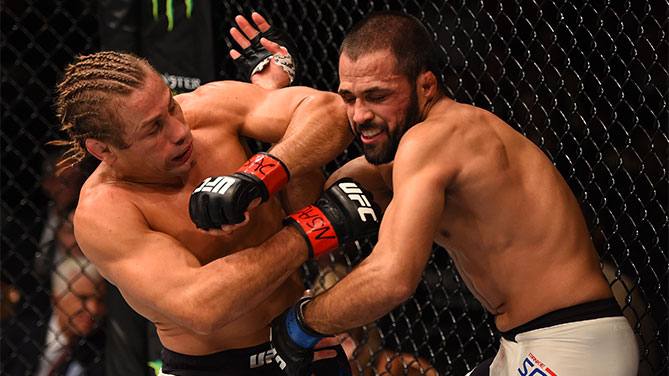 Despite seeing his seven-fight winning streak snapped in UFC 194 prelim action at the MGM Grand Garden Arena Saturday, Frankie Saenz proved that he was ready for prime time, putting on a gutsy effort before losing a decision to bantamweight superstar Urijah Faber.

Sacramento’s Faber came out fast to start the fight, but Saenz was calm and composed in the biggest fight of his career and he refused to get rattled. Faber wasn’t able to get the bout to the mat like he attempted to, and while Saenz matched him throughout the round in exchanges, a few more flush power shots landed might have edged it for “The California Kid.”

Sanez took all those shots well in the opening round, but in the second, Faber began to break through, staggering Saenz and then landing several hard elbows. The Arizonan got his wits back after a short spell and then went on the attack as the fight went to the mat. With a little over two minutes left, the two rose and split up, resuming the stand-up battle which Saenz was starting to win as Faber tired.

The two bantamweight contenders kept battling it out on even terms throughout the third round, but with two late takedowns, Faber got what he needed to edge out the round and wrap up the fight.

Torres (7-0) had a solid first round both striking and grappling, even if the slow-paced action didn’t keep the fans engaged. In the second, there was more tying up against the fence, this time with the two exchanging positions of control, and the crowd began to get restless. Once the two broke, Torres scored with some hard strikes, and when Glendale, Arizona’s Jones-Lybarger (6-2) sought a takedown, it was the Floridian winding up on top, allowing her to fire off ground strikes and secure the round.

There wasn’t much change to the pattern set by the previous two rounds in the final frame, at least until Torres started flurrying in the final two minutes, tagging and bloodying her foe with several hard shots en route to sealing the victory on the scorecards. 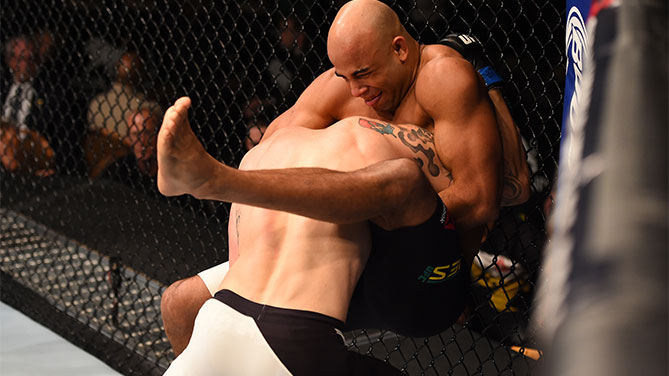 A highly-anticipated clash of unbeaten welterweight prospects didn’t last long, with Brazil’s Warlley Alves keeping his “0” thanks to a first-round submission.

After eating a couple hard shots from Alves as the bout opened, Covington looked for a takedown and got it. Alves didn’t stay in trouble for long though, and the two briefly grappled against the fence before Alves sunk in a guillotine choke. Covington tried to slam his way out of trouble, but it only made the choke tighter, with the tap coming almost as soon as the two hit the mat. The official time was 1:26. 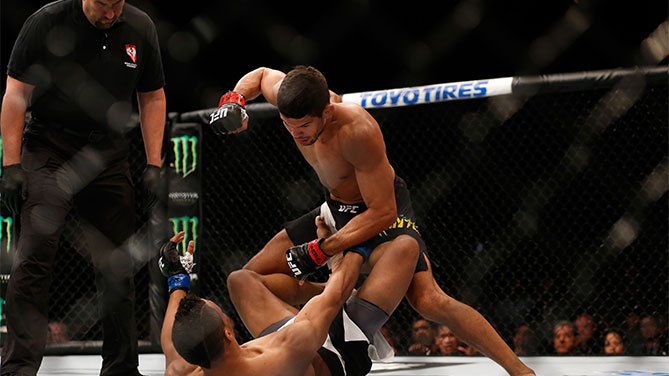 Brazil’s Leonardo Santos got the night off to a good start for the Nova Uniao team, upsetting hot prospect Kevin Lee via first-round TKO.

Now 4-0-1 in the UFC, the Ultimate Fighter Brazil 2 winner kept his unbeaten Octagon slate intact in impressive style, first breaking open a close first round with a takedown midway through and then dropping Lee with a right hand with under two minutes left. Lee tried to weather the storm while on the deck, but a series of unanswered strikes brought in referee John McCarthy to stop the bout at the 3:26 mark.

As Lee (11-2) protested the stoppage, Rio’s Santos (15-4-1) celebrated by running from the Octagon before returning for the official decision.

“I was so excited, I didn’t know what I was doing,” Santos laughed.