Faber convinced he knows secret to toppling Cruz at UFC 199 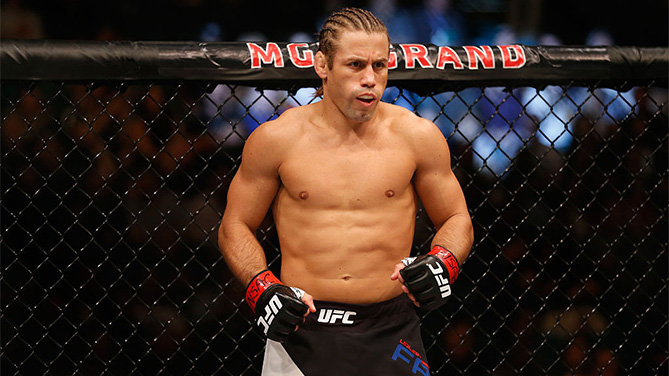 The strikes against Urijah Faber are easy: three UFC title fights and three losses. Some use those stats to measure Faber’s career negatively -- that he’s never been able to achieve the ultimate in the sport. But to Faber, the UFC’s belt remains the last remaining piece to a puzzle of long-time greatness.

“You have to realize in 2003 the lightest (UFC) class was 170 pounds and they had three events a year,” Faber said. “I went around and collected belts in my division (across other promotions).”

By 2006 he held belts for three promotions all at once, most notably with the WEC. On Saturday at UFC 199 Faber hopes to complete the collection by winning the UFC bantamweight title against longtime rival Dominick Cruz.

Cruz, of course, is the Vegas favorite (-525) who has never lost a UFC title fight. But if there is any kryptonite to Cruz’s dominance in the UFC, it could be Faber.

Faber is the lone man to ever defeat Cruz and he believes there are plenty of angles that give him an opportunity to earn the title Saturday.

“If you watch our last fight I didn’t have trouble connecting,” Faber said of Fight No. 2 when Cruz defeated Faber by decision in 2011. “I’ve never had trouble reaching him so you can say what you will about footwork etc. but it didn’t bother me.”

Faber isn’t wrong. Though he lost that fight by unanimous decision, he knocked Cruz down at one point but wasn’t able to get the finish. It was a classic Cruz performance, one of many that have earned him 21 professional wins in 22 fights.

Which begs the question: What will be different this time around?

Faber is the elder but he believes Cruz is the more battered man, which is hard to argue after Cruz limped to the finish line in Round 5 of his decision victory over TJ Dillashaw in January.

“Dominick’s body has been beaten down and looks a lot less in tune,” Faber said. “He’s not aging nicely. I am aging well and it’s some of best condition I’ve ever been in.”

Even though Faber admitted he believes Cruz’s body is deteriorating; championships are won in the mind – another advantage he holds. Cruz prides himself on his analytical ability to adjust mid-fight while Faber uses his instincts. And he has 41 fights on his professional resume to back that up.

What has yet to be seen is the secret to defeating Cruz that Faber thinks he holds in his back pocket. It first surfaced at Fight Night Boston after Cruz defeated Faber’s former teammate and longtime friend Dillashaw.

Faber said he knew what Dillashaw needed to do to win that fight and could have given him the proper insight had Dillashaw not switched teams.

We’ll find out Saturday if Faber truly knows the secret to defeating “The Dominator.”