Faber Back Where He Belongs - In A Championship Fight

"We’re different people and the chip on his shoulder, I don’t know if
it’s because of me or because of life or what, but we’re gonna go out
there and fight, and I don’t mind being the recipient of his
frustration." - Urijah Faber 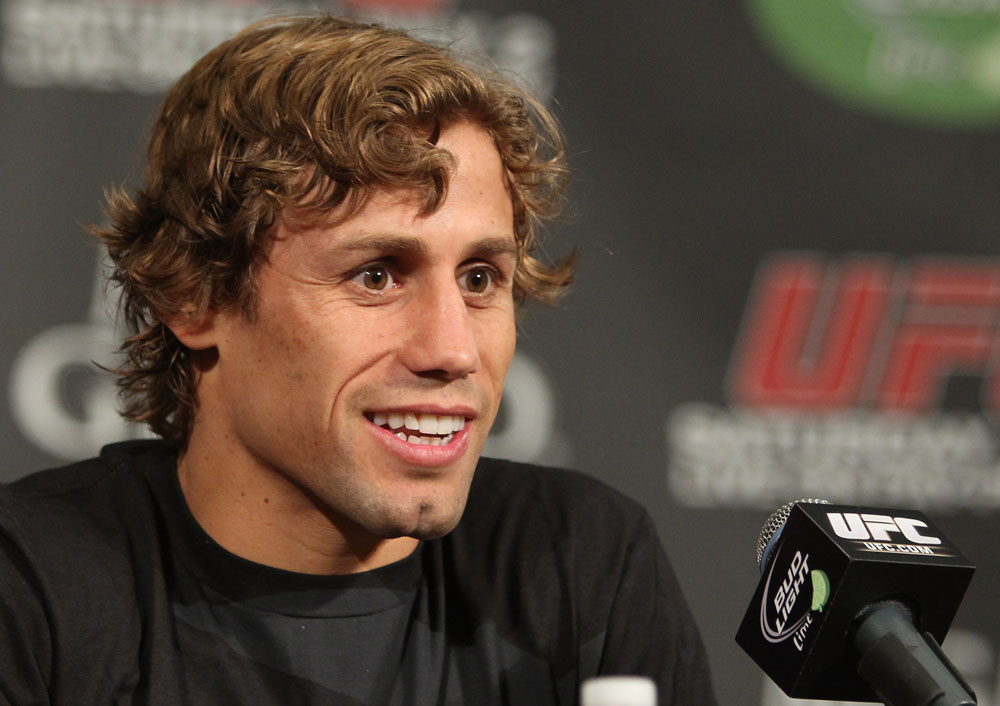 None will be bigger than the one he engages in this Saturday though, as Faber challenges Dominick Cruz for the UFC bantamweight title. He admits that this one has a little bit extra on it than the previous 18.

“It would be at the top,” said Faber. “At the time when I was having these other title fights, they were considered the best for the weight class, and I’ve been a pretty celebrated guy even though the sport’s brand new, but this would be the biggest of all the celebrations.”

And not just because he would add the UFC bantamweight belt to the WEC featherweight strap he held from 2006 to 2008 on his resume; it’s because he and Cruz, who he defeated at 145 pounds back in 2007, isn’t exactly on his Christmas card list. It’s a rivalry that has added more sizzle to an already highly-anticipated bout, and may be the first time Faber has really lobbed some verbal and psychological bombs at an opponent.

You can tell he’s loving it too. Yet while the bad blood with an opponent may be new, being the target of every fighter in his weight class isn’t. From the time the WEC was purchased by Zuffa and Faber became the unquestioned star of the promotion, he had a neon target on his back, one he accepted with grace and an amazing dose of professionalism. That professionalism has made him a favorite of the media and fight fans, and without question, when it comes to understanding what separates a good fighter from a star fighter, he gets “it.”

“It comes with wanting to be the best, and it’s not just about fighting out there,” said Faber. “When you look at the guys who have made their name in the sport, it’s not always the guys that are talented only who stand out. It’s the guys that balance other things and work just as hard outside of their given sport as they do inside. And being a professional, it’s doing interviews and media and everything else. It’s part of your job and we’re entertainment as well as a sport.”

Such an observation isn’t lost on Faber’s Team Alpha Male squadmates either, and they have their captain to remind them just in case.

“You have to teach them about the other side of things and I’ve done that with my guys,” he said. “We have general talks about the importance of being a business guy, and that’s doing the interviews and basically letting people know who you are. I think a lot of times, there are some really colorful characters that never get their personalities across to the masses, and that can hurt a person. It can also hurt a person if they have a terrible personality and it gets across, but that’s where you get villains and heroes and people that you’re indifferent about.”

No one was ever indifferent about Faber, and when you say that about a fighter, that usually means that he’s either loved or hated. But in the case of “The California Kid,” you rarely found fans that were negative toward him. He fought whoever was put in front of him, he was exciting in the cage, and accessible outside it. For a while, until stars like Cruz, Miguel Angel Torres, Jose Aldo, Anthony Pettis, Ben Henderson, and Donald Cerrone emerged, he was the WEC. Even when he lost his featherweight title to Mike Brown and a subsequent bout to Aldo, his star didn’t fade. He did crave a merge with the UFC though, and it wasn’t until late last year that he got his wish.

“There’s no secret between Lorenzo (Fertitta) and Dana (White) and those guys that I’ve been pushing, even during the WEC, to combine the two,” said Faber. “I always heard rumors (of a merge) and stuff, but the bottom line is that it’s something that I wanted. Although the WEC was a great thing, we lost a lot of notoriety just to the fact that I wasn’t a UFC champion, even though I was the best fighter at the weight for a long time. It was a building process and you didn’t get the UFC stature even though you had the best in the world stature, so I’m glad to be with the UFC.”

In March, he made his Octagon debut with his second win at 135 pounds, a hard-fought decision victory over another former WEC champ, Eddie Wineland. The victory set up Saturday’s rematch with Cruz, one the champion has been waiting on for years. Faber’s used to having fighters chase him, but in this case, he believes whatever Cruz is searching for will not be fulfilled, either on fight night or afterward.

“I remember growing up, my mom’s excuse for everything was ‘aw, they’re just jealous,’” he laughs. “Regardless of what Dominick Cruz thinks he wants or needs, what he really wants and what I have, he’s not gonna get from beating me in the cage. We’re different people and the chip on his shoulder, I don’t know if it’s because of me or because of life or what, but we’re gonna go out there and fight, and I don’t mind being the recipient of his frustration. I’m not worried about that.”

It’s the confidence of a fighter who has seen it all, and one who practically invented what championship-level fighting in the lower weight classes is. As for what happens in the fight itself, the 32-year old from Sacramento is equally unconcerned.

“I’m not a huge planner out there,” he admits. “I’m an elusive fighter, I fight different all the time, and I guess the best bet is to injure me in some way because that’s usually what happens. (Laughs) Catch me with a good punch while I’m doing something crazy or injure me in some way. But even when I’m injured, I’m still going to the bitter end. If you want to talk gameplans, then that’s it because that’s the only way I’ve lost. I lost to three people in my career and they’ve all been bigger than I am (Aldo, Brown (twice), Tyson Griffin). In one fight I had two damaged hands (Brown II), in two fights I got caught with a punch when I was jumping up in the air (Brown I, Griffin), and in one fight I got my legs blasted to where I couldn’t barely walk (Aldo). That’s the gameplan – injure me.”