UFC flyweight champion Valentina Shevchenko has plenty of highlights in her career. Here's a few of her most pivotal fights in the Octagon.
By Thomas Gerbasi • Aug. 5, 2019

On Saturday, Valentina Shevchenko defends her UFC flyweight title for the second time against Liz Carmouche in the main event of UFC Fight Night in Uruguay. In rapid-fire fashion, “Bullet” has become one of the top fighters, pound-for-pound in the world, but the journey to this point has been long in the making, as you will see below.

A year ago, Valentina Shevchenko was hoping for a call from the UFC. At United Center in Chicago, the Peru-based striker may be in line for a shot at the UFC women’s bantamweight title after outpointing former world champion Holly Holm via unanimous decision.

“My strategy was to do everything I know, to put all my heart, all my power, everything I learned in more than 20 years in martial arts, and I did it,” Shevchenko said.

Now winner of two of her three Octagon bouts, she hopes to face off with the woman who handed her that lone UFC defeat, newly crowned champion Amanda Nunes.

“Amanda is a good fighter, she has a good standup and ground game, and of course I want a rematch for the title belt,” Shevchenko said.

“I knew she was a counterpuncher, we were ready for that; she’s a tough girl, I knew that,” a gracious Holm said. “I knew I had my hands full with this fight. I knew it was a really big challenge. What can you do? I knew it was a competitive fight. I could have done more, I’m disappointed in myself, and I take nothing away from her. She was very tough.”

Kicks were the order of the day for both fighters in the early going, with Shevchenko landing a couple hard punches before Holm landed with a right hand that produced a flash knockdown with three minutes left. More stunned than hurt by the blow, Shevchenko got back to her feet and back to business, scoring a takedown with 90 seconds left. Holm rose quickly, but the two remained locked up against the fence, the No. 2-ranked Holm dictating the action until they broke with a few seconds left in the round.

There was little significant action in the first two minutes of round two, both respectful of the other’s attacks. Shevchenko eventually began scoring with both hands and with inside leg kicks, forcing Holm to take the role of aggressor in the closing stages of the frame, a role that was playing into Shevchenko’s hands.

Shevchenko continued to get the better of the exchanges in the third, and she then scored two takedowns.  On the ground, “Bullet” pressed her advantage, pushing Albuquerque’s Holm, who was cut over the right eye by a clash of heads, to the fence and keeping her there for the rest of the round.

Holm began to show a sense of urgency in the fourth, only to have much or her charges countered. Even when she landed solid shots, Shevchenko made it a point to throw back combinations in return.

Little changed in the fifth. If anything, Shevchenko fought as if she was trailing on the scorecards, as she kept nailing Holm with a variety of punches and kicks while Holm was unable to score with the flush shots needed to put the Kyrgyzstan native on the defensive and turn things around.

It was assumed that if the main event clash between top bantamweight contenders Valentina Shevchenko and Julianna Pena went to the ground, it would be Pena’s fight. Instead, it was Muay Thai specialist Shevchenko that emerged victorious on the mat at Pepsi Center in Denver, as she submitted Pena in the second round to cement her No. 1 ranking at 135 pounds and likely set up a rematch with champion Amanda Nunes.

“Many people asked me before the fight, ‘Valentina, you are a striker, Julianna is a wrestler; how are you going to deal with this?’ Every time, I said, ‘Yes, I’m a striker, but I am an MMA fighter and I am a complete fighter,” said Shevchenko, who got the wheels turning in the Octagon for a title fight with Nunes, who decisioned her in March of 2016.

“I’m pretty sure the next fight will be a title shot and I’m very excited to take the rematch and take this belt,” she said.

“You’re not gonna do it,” Nunes countered. “We’re gonna do it again and I’m gonna finish you.”

“Be careful with your words, because every time it’s going to come back to you.”Shevchenko submits Pena in Round 2 of their women's bantamweight clash.

To get to this point, Shevchenko first had to subdue the No. 2-ranked Pena, who initiated a clinch to start the fight and scored with several knees before Shevchenko took her opponent to the mat in the second minute. Pena got up quickly, remaining locked on to her foe as she kept firing off knees. Another Shevchenko takedown followed midway through the round, and this time “Bullet” was able to get off several hard punches as she pushed Pena to the fence. In the closing moments, Pena tried to lock up Shevchenko’s arm, but she was unable to do so before the round ended.

Going all in for the takedown as she locked Shevchenko up in the opening moments of round two, Pena came up short as she wasn’t able to muscle the Kyrgyzstan native to the mat. The two remained tied up while standing, Pena staying busy with close-range strikes. Pena got the fight to the mat briefly, but Shevchenko refused to stay grounded. The second time the Washington native tried to drag Shevchenko to the mat though, she got her takedown and began letting go with ground strikes. Yet in the final minute, Shevchenko turned the tables, suddenly locking in an armbar that shocked Pena and the crowd, producing a tap out at 4:29 of the second round.

It was close and competitive for 25 minutes, but as the UFC 215 main event between Amanda Nunes and Valentina Shevchenko ended with a Nunes victory by five-round split decision at Rogers Place in Edmonton, it’s clear that with a trio of consecutive victories over Miesha Tate, Ronda Rousey and Shevchenko that the Brazilian may be settling in for a long reign at the top.

Scores were 48-47 twice and 47-48 for Nunes, who successfully defended her 135-pound crown for the second time as she repeated her 2016 victory over Shevchenko, which she earned by a close three-round decision.

The two traded kicks in the early going, neither surging into the lead. But as the round progressed, it was the champion who began to take an edge as she stayed busy while keeping Shevchenko on the end of her strikes. Shevchenko’s patience began paying off late in the round as she started to land counters, but Nunes was calm under pressure when the frame ended. 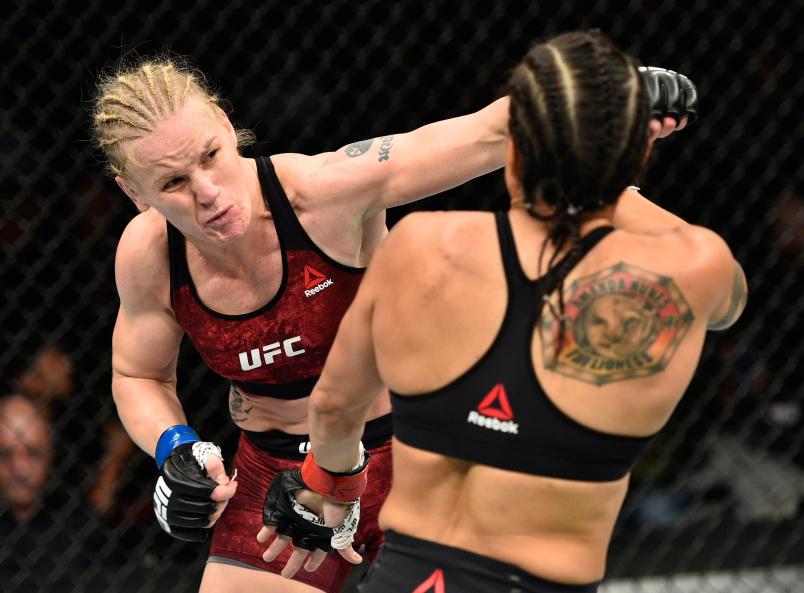 The war of nerves continued in round two, but Shevchenko got busier as Nunes’ work rate dropped slightly, allowing “Bullet” to pull even on the cards heading into the third.

Neither fighter was able to pull ahead significantly in the third, a testament to the evenly matched nature of the bout, and while Nunes marched forward, Shevchenko fired back counters, leaving the scoring of the round down to what the judges put more stock in.

The Bahia native looked charged up entering the fourth round for the first time in her career, and she came out fast to start the frame, continuing to work behind kicks to the leg and quick punches upstairs. Shevchenko continued to get her shots in, but she wasn’t busy enough to get Nunes’ attention for any length of time. Midway through the stanza, Shevchenko scored with a nice combination at long range, and she started putting her strikes together effectively as Nunes slowed down.

With the bout possibly up for grabs, both fighters kicked off the final round with a heated exchange which, not surprisingly, was an even one. From there, it was clear that both wanted to finish strong, with Shevchenko being aggressive in her attempt to take the title and Nunes picking her shots and even trying for a takedown in order to keep the belt. With under two minutes left, Shevchenko tried to turn a Nunes takedown into a throw, but Nunes ended up on her back on the mat. Shevchenko got back to her feet, but it was Nunes going all-in for another takedown, and she got it with less than a minute remaining. Shevchenko fired off strikes from her back, but Nunes wouldn’t give up the top position, and that’s where she would remain until the horn sounded to end the fight.

It took two weight classes and two title fights, but Valentina Shevchenko finally got a well-deserved world championship belt, as she scored a unanimous five-round decision over former strawweight titlist Joanna Jedrzejczyk to win the vacant UFC flyweight title in the UFC 231 co-main event at Scotiabank Arena in Toronto.

Scores were 49-46 across the board for former bantamweight contender and title challenger Shevchenko.

Jedrzejczyk was busy with her striking in the opening minute of the fight, but as soon as Shevchenko was able to get her hands on her, she easily secured the takedown. After taking some strikes, Jedrzejczyk was back on her feet, but Shevchenko kept her locked up against the fence. With 1:15 left, Jedrzejczyk got loose, and while she remained busy, a kick to the body by Shevchenko was the telling blow of the round.

Jedrzejczyk did her best to keep Shevchenko at the end of her strikes in round two, but each series of strikes was met with sharp counters from the Kyrgyzstan native, who again took over once she was able to slam Jedrzejczyk to the mat with a little over 90 seconds remaining. On the mat, Jedrzejczyk had no answers, as Shevchenko landed several hard elbows.

Shevchenko wasn’t able to score the takedown in the third, but she still landed several hard shots over the course of the round. Jedrzejczyk also landed her best shots of the fight, but they had little effect on “Bullet.”

In the second minute of round four, Shevchenko got the fight to the mat, but Jedrzejczyk rose fairly quickly. Shevchenko kept Jedrzejczyk in a headlock against the fence before moving into a more conventional clinch, using her strength to her best advantage. With under a minute left, the two broke, Shevchenko landing the better blows down the stretch.

Jedrzejczyk came out fast for the final round, landing a few hard right hands before Shevchenko clinched. Shevchenko wasn’t working much in the clinch, but Jedrzejczyk did before referee Todd Anderson separated the two with three minutes left. Jedrzejczyk again pushed the pace, but when the 30-year-old Shevchenko did throw, she was making it count, leading to a strong finish and a world championship.