Mark Hunt has always been the people’s champion, and a look at these five bouts below leave little question why “The Super Samoan” has appealed to fight fans around the world for years. This Saturday, Hunt steps into the Octagon for the 18th time to face Justin Willis, and to get ready for this weekend’s showdown in Adelaide, here are five of the most memorable moments from the UFC career of the king of the walk off KO. 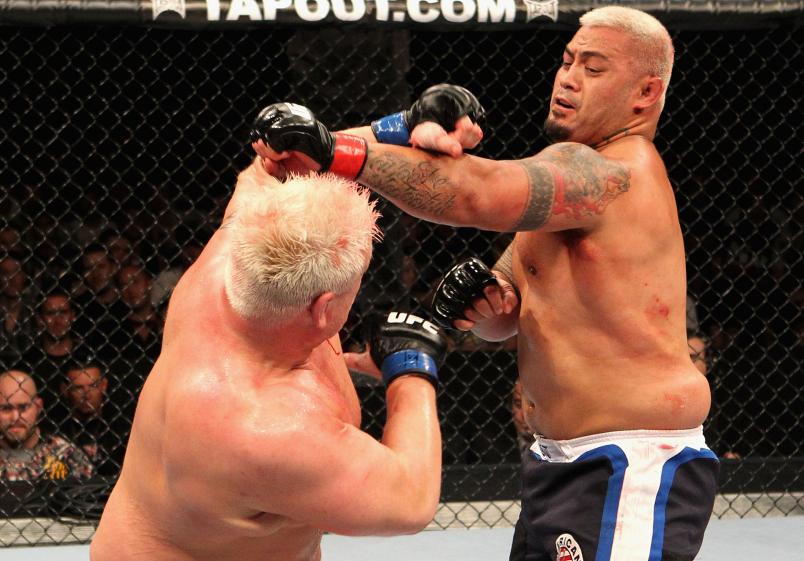 A former K-1 Grand Prix champion in 2001, Mark Hunt made the move to mixed martial arts in 2004, quickly becoming a star in Japan’s PRIDE and Dream promotions as he fought the likes of Mirko Cro Cop, Wanderlei Silva, Josh Barnett, Fedor Emelianenko, Alistair Overeem, and Gegard Mousasi. And though he emerged from his time in Japan with a 5-6 record, Hunt’s appeal never waned, simply because he was willing to fight all comers at anytime.

“That’s just what fighters do,” Hunt said in 2010. “I’ve been doing that my whole life from thousand seat arenas into 30-40,000 seat arenas. It’s mind blowing, but that’s what a fighter does to get ahead. You don’t get many opportunities in this lifetime, so whenever they come along, you just can’t push them aside. It’s hard for some fighters coming up, and they might say, ‘Aw, I’m not ready for this.’ But at the end of the day, we’re never gonna be ready.” (Laughs) “But when I’m in there, I’m in there a hundred percent and however it goes, it goes. I’m a fighter, and when the opportunity comes for me to fight anyone, anywhere, anytime, I’ll do it.”

Needless to say, anticipation was high for Hunt’s Octagon debut in September of 2010, but a 63-second submission loss to Sean McCorkle at UFC 119 placed him in a precarious position career-wise. As he put it when asked about that time, “Mark Hunt was one that wasn’t even wanted. He wasn’t good enough to be here.”

A walk off knockout of Chris Tuchscherer in his adopted hometown of Sydney, Australia got him back in the win column though, thrilling fans and kicking off the resurgence that has kept him among the best heavyweights in the world ever since.

Following the win over Tuchscherer, Hunt won a three-round unanimous decision over Ben Rothwell in a fight that was more memorable for the cardio issues of the two fighters at high altitude in Denver than the fight itself. A knockout of Cheick Kongo in his return to Japan at UFC 144 in February of 2012 got things back on track for Hunt, but in his Knockout of the Night win over Stefan Struve, the Mark Hunt bandwagon really filled up, as he engaged in an exciting back and forth scrap with the “Skyscraper” before a jaw-breaking finish in the third. 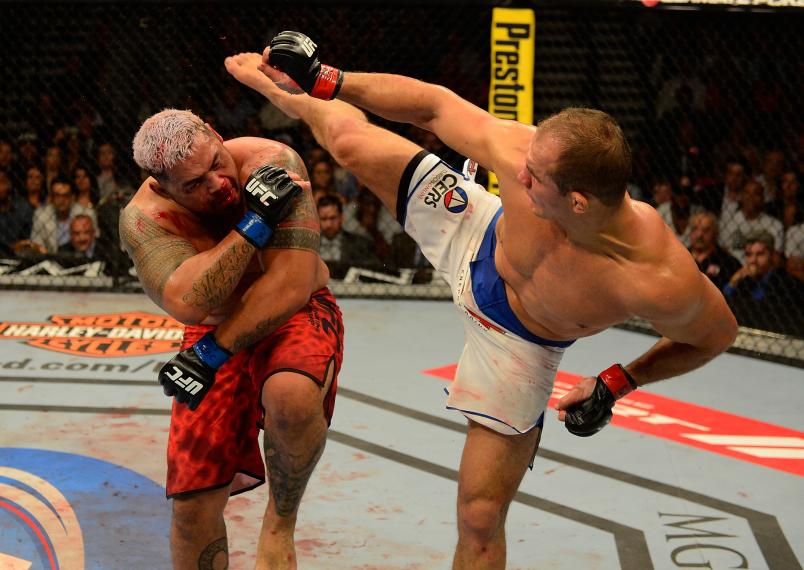 A Fight of the Night in the heavyweight division is always a special thing, because you know that to get to that point, bombs have been landed and eaten by both combatants. That was the case in Las Vegas with Dos Santos and Hunt, and while the former heavyweight champion had a lead heading into the final round, he kept pressing, eventually catching Hunt with a highlight-reel head kick that ended matters with just 42 seconds left.

Sure, Silva’s failed post-fight drug test for elevated levels of testosterone put a damper on the end result, but the five rounds that preceded the draw verdict made for some of the greatest heavyweight action ever seen in the Octagon, ring, mat, back alley, anywhere. Hunt and Silva gave as good as they got for 25 minutes that shocked and amazed fight fans who wondered how these two were able to remain standing throughout what was a war that couldn’t even be described as grueling, because it was more than that. This was a special fight, and the rare one in which a draw verdict was justified.

Now 40 years old, Hunt could have showed signs of slowing down, but when he knocked out the steel-chinned Roy Nelson in the second round at Saitama Super Arena in Japan in 2014, it only proved that Hunt wasn’t getting older, he was getting better. When it was over, I referred back to my first chat with Hunt in 2010, when I asked him why he decided to fight on and test the waters in the UFC.

“I was given the opportunity to have one more shot and I went back,” he said. “Otherwise I would have been through with fighting. I would have looked back when I’m like 40 years old and said ‘those were the good ol’ days.’ (Laughs) But this is an opportunity to fight on the big stage again and I’m going to try to make something happen and become world champion.”

He’s made something happen. And while he hasn’t strapped championship gold around his waist, I get the impression that he’s fine with the title of “People’s Champion.”