Five Fights That Confirm Why “Bate Estaca” Is An Elite Strawweight
By Thomas Gerbasi • May. 7, 2019

This Saturday, Jessica Andrade gets her second crack at the UFC strawweight title when she faces Rose Namajunas in the main event of UFC 237 in Rio de Janeiro, Brazil. Since her first title shot against Joanna Jedrzejczyk in 2017, “Bate Estaca” has gone 3-0 to earn her fight with “Thug Rose,” and a look at the five fights below will confirm why she is one of the premier 115-pounders in the sport.

In her first bout at 115 pounds, Brazil’s Jessica Andrade immediately announced her arrival as a strawweight contender, dominating former world title challenger Jessica Penne before stopping her in the second round.

Andrade’s striking blitzes worked well for her in the first round, as she put Penne on the defensive and marked her face up. Eventually, “Bate Estaca” began going to the body, and as the round was coming to a close, Penne was almost stopped, as Andrade rocked and dropped her at the horn.

Penne looked for a takedown as round two began, but Andrade found her range again and continued to unleash her furious assault of punches. With no response coming back from the gutsy but outgunned Penne, referee Jason Herzog had no choice but to halt the bout at the 2:56 mark. 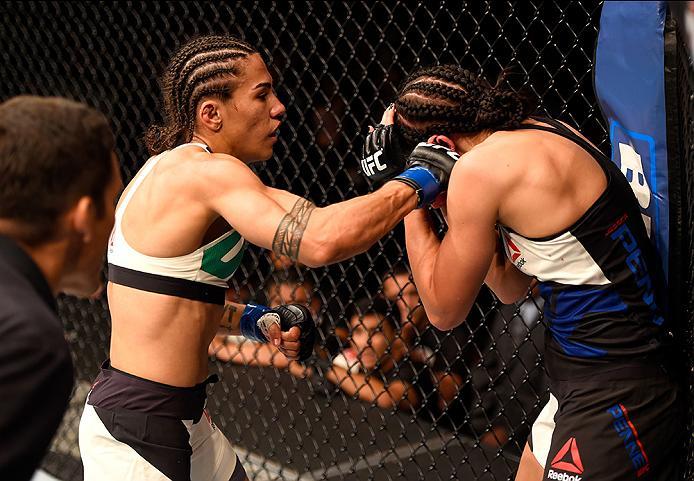 INGLEWOOD, CA - JUNE 04: Jessica Andrade of Brazil punches Jessica Penne in their women's strawweight bout during the UFC 199 event at The Forum on June 4, 2016 in Inglewood, California. (Photo by Josh Hedges/Zuffa LLC/Zuffa LLC via Getty Images)

In the UFC 203 main card opener, Brazil’s Jessica Andrade survived a nasty cut over her eye to take fellow strawweight contender Joanne Calderwood down and finish her via first-round submission.

After eating some hard strikes and getting cut over the left eye to open the bout, Andrade got two takedowns, the second one keeping Scotland’s Calderwood grounded. With the blood flowing, Andrade fought with a sense of urgency on the mat as she looked to finish, and after delivering a series of hard strikes, she sunk in the guillotine choke that forced the tap out at 4:38 of round one. 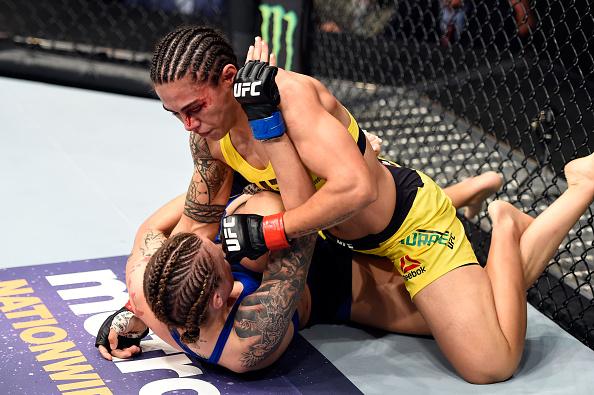 CLEVELAND, OH - SEPTEMBER 10: (R-L) Jessica Andrade of Brazil takes down Joanne Calderwood of Scotland in their strawweight bout during the UFC 203 event at Quicken Loans Arena on September 10, 2016 in Cleveland, Ohio. (Photo by Josh Hedges/Zuffa LLC/Zuffa LLC via Getty Images)

The return of Invicta FC strawweight champion Angela Hill was a welcome one, but in the main card opener, it was Jessica Andrade’s night, as the top five strawweight contender may have cemented a shot at UFC champion Joanna Jedrzejczyk with an exciting three-round decision win.

All three judges saw the fight 30-27 in one of the closest and most competitive shutouts any fight fans could see.

Andrade and Hill fought the first five minutes at a furious pace, Hill able to get off solid kicks from the outside while trying to hold off the steady pressure of Andrade. And while Hill held her own during exchanges with Andrade, as the round progressed, it appeared that the stronger Brazilian was taking over and landing the more telling blows.

Hill was able to open a cut under the right eye of Andrade early in round two, and she not only kept the pace high, but was also showing off a granite chin under the relentless attack of “Bate Estaca,” who threw everything at her foe whenever she got within striking range. In the final minute, the bout went to the mat and Andrade took Hill’s back, firing off strikes each step of the way. Hill rose to her feet, but Andrade slammed “Overkill” to the mat once more just before the end of the round.

The crowd erupted early in round three as Hill and Andrade slugged it out against the fence, neither fighter giving an inch in the process. Yet as the round progressed, Andrade’s right hand began to find its mark more and more often, and the end seemed to be close. At least until a Hill left dropped Andrade with 2:40 remaining. Andrade got to her feet quickly and went back on the attack, pouring on the offense until the final horn, when both fighters got a rousing ovation from the fans at Toyota Center. 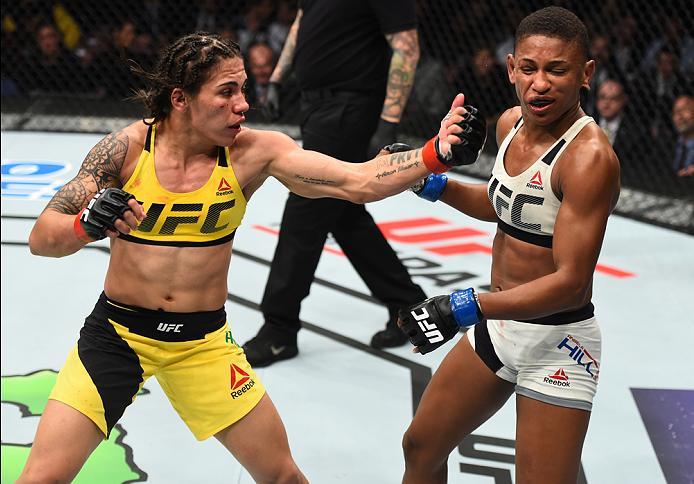 In her first fight since a losing effort against strawweight champion Joanna Jedrzejczyk, Jessica Andrade returned with a career-best effort as she defeated No. 1 contender Claudia Gadelha via unanimous decision in a clash of two of Brazil’s best.

Gadelha ripped off hard combinations with regularity as the bout commenced, landing with an audible pop as she beat her foe to the punch and opened a cut on her forehead. With under two minutes left, Andrade got back into it with a thunderous slam, and while Gadelha countered with a guillotine choke attempt, “Bate Estaca” slipped loose and then began landing with hard ground strikes.

Gadelha opened up the second stanza with a takedown, only to see Andrade pop right back up to her feet. The proceeded to scramble, with Andrade ending up on top on the mat, where she worked on the cut over Gadelha’s left eye. Gadelha soon rose and the two traded punches, Andrade now taking control as fatigue started to set in on “Claudinha.” But with seconds remaining, Gadelha nearly sunk in a guillotine choke only interrupted by the horn ending the round.

After a respectful hug to begin the final frame, it was back to work for the two Brazilian battlers, and after a failed shot by Gadelha, Andrade slammed her opponent to the mat. Andrade’s work rate on the mat was relentless, and she dug punches in to the body and head. With 90 seconds left, Andrade moved into side control and kept the pressure on, and while Gadelha made it to her feet, she had nothing left for a final surge in the closing seconds.

Jessica Andrade impressively made her case for a second shot at the strawweight title, as she scored a one-punch knockout of Karolina Kowalkiewicz in the UFC 228 co-main event at American Airlines Center in Dallas.

Andrade blitzed Kowalkiewicz with hooks as the fight began and hurt her immediately. It looked like the end was near, but Kowalkiewicz was able to clear her head and rip off some flush shots of her own. Ninety seconds in, the bout appeared to settle into a less frantic pace, but Andrade didn’t get the memo, as a single right hand put Kowalkiewicz down and out, with referee Kerry Hatley immediately stepping in at 1:58 of round one. 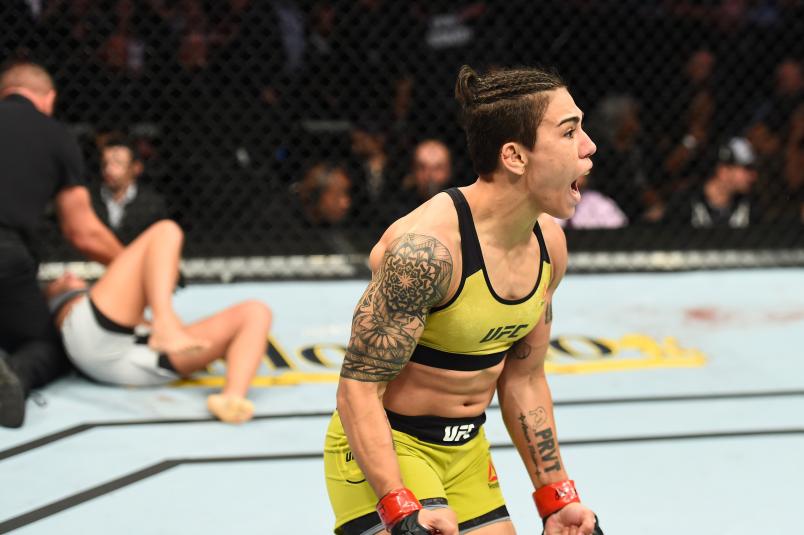