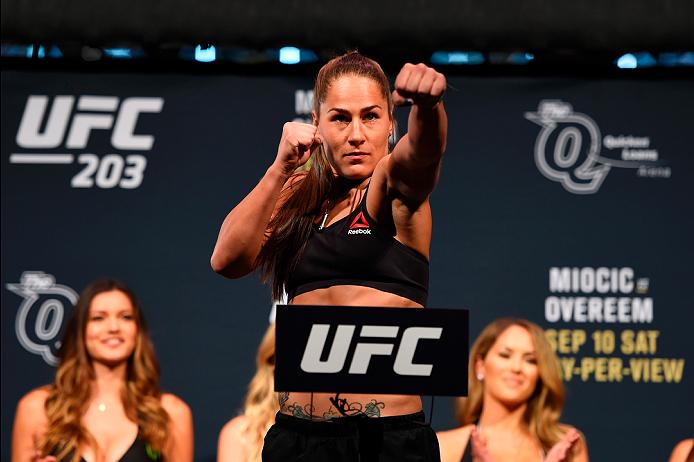 The big 3-0. It’s a number with a lot of meaning, even if only symbolically. It’s a sign that the next step has arrived, a time to start to evaluate where the past 29 years have gone, and what the following years will entail.

Jessica Eye turned 30 on July 27. And she had that talk with herself. She even started a little early.

“I had it a little bit after the Sara McMann fight and then I had it when I turned 30,” she laughs. “I thought, ‘I’m 30, this is a big difference now and it’s a big jump in life. My 20s are officially gone. I have to be the person that I want, not what other people want. I decided that these are the years to do it, this is the time to do it.”

That goes for life inside the Octagon as well. As Eye approaches her UFC 203 bout against Bethe Correia on Saturday night, she’s lost four of her last five, including three in a row. Those three – to Miesha Tate, Julianna Pena and Sara McMann – aren’t anything to be ashamed about, considering that trio is among the best 135-pounders in the world. But 0-3 is 0-3, and the Ohio product doesn’t shy away from that reality.

“I know that I’ve lost three in a row, I know that it looks terrible and I’m basically about to strike out if I don’t make a move here,” she said. “But I want to keep going and I know what I need to do, and I’ve been making a lot of changes in my life. I’ve had a great camp, I’ve had a really good mindset going into all this, so it’s exciting just to be back here and be able to make this happen.”

And it’s in Cleveland, though everything that’s happened over the last few years have put the reality of a homecoming a few places down the list after getting her life in order and getting a win. Correction, the win is the only thing.

Eye’s father, Randy, lost his battle with cancer in early July. The father-daughter relationship was a rocky one at times, but Eye was the first one to step up when her dad was diagnosed with cancer. As the battle went on, the rocky times returned, and in the midst of this, she tried to compete against the best bantamweights in the game. If there’s a person on this planet who was always trying to do for others while putting herself second, it was Eye, and unfortunately, in this sport, that usually leads to losses.

It didn’t help that in those three recent defeats, Eye – a striker – was matched up with wrestlers who primarily used their mat games to win. But Eye isn’t using that as an excuse.

“I think all of the matchups have been in my favor, to be honest,” she said. “I think that I came in fighting the wrong game plans. I went into those fights that I lost and I fought the fight that they wanted, and not the fight that I knew that I knew how to win. So I don’t think I was put in a position that would make it harder on me. I think they genuinely thought that my abilities were there. That was my fault and those were my mistakes that I made that caused those things.”

After the McMann fight though, something had to give. Eye finally found her light in the form of a sports psychologist who let her know that it was all right to focus on herself.

“I was so mad at myself that I had waited so long, and I’ve been so frustrated by that because it’s been one of the most enlightening experiences,” she said. “He told me it’s not about being selfish, but taking care of who’s number one, and that’s me.”

Just before Randy Eye passed, his daughter reached out once more. It was the closure both needed.

“When I talk about my father and I think of him, it’s happy tears and it’s motivation,” she said. “And I hope that I can shed light on this, that if you’re arguing with a family member or having these problems with them and they’re terminally ill, be the bigger person and be there for them. I’m so glad that I was able to mend things with my father, and so was my eldest brother, who hadn’t talked to my dad for 10 years. We were all able to sit there and tell each other we loved each other.”

Now she can fight. For herself and no one else. But when the Octagon door closes on Saturday night, you can bet that she will hear her father’s voice in her head giving her the words he did before so many fights before:

“Jessica, you let nobody steal your lunch money.”