“I just kept believing, kept believing in myself, and believed that as soon as they created the division, it was time to hit the ground running,” said Eye, who has won each of her UFC starts at 125 pounds.
By Thomas Gerbasi • Jun. 5, 2019

Jessica Eye can smile now and mean it. The newly-minted Las Vegan can talk about tomorrow and genuinely feel like things are going to be better than they are today. Yet as settled as her life is in the lead-up to her first world title fight against Valentina Shevchenko this Saturday, there will always be a thick layer of Ohio grit there to protect her and keep her grounded.

“I think the one thing that I’ve learned most is even when you think things are gonna be at their worst, they’re probably not,” she said. “They could get way worse.”

She laughs, knowing exactly how that sounds, but then comes the other side of that statement.

“But in the same regard, things could be as good as they seem too.”

It’s the kind of development that the 32-year-old hoped to experience, but she had to have her doubts, especially as life issues translated into a four-fight UFC losing streak that had many wondering if this was the same fighter they were so high about when she made her Octagon debut in 2013.

“I was going through a lot of things in my life,” she said. “I was transitioning from a young woman into an older woman, getting my maturity in that way. Unfortunately, I had the overturned win (in her debut against Sarah Kaufman). But I had an amazing performance against Leslie Smith (in 2014) and then I go on a big losing streak and it was crazy. It was a terrible way to start your UFC career when you just spent all of your life just winning, winning, winning and making all this headway. Then my father passed away, I split with my team, I had all of these things that added up.”

By the time Eye lost to Bethe Correia in her Cleveland backyard in 2016, it was as close to rock bottom as she could go, but as far as the fighting went, her 1-5, 1 NC slate was easily explained away because, simply put, she was fighting far above her optimum weight against killers night in and night out.

But if you know Eye, you are well aware that shying away from a challenge isn’t how she’s built. So despite becoming one of the top prospects in the sport at 125 pounds, the opportunity to fight at bantamweight in the UFC – which didn’t have a women’s flyweight division – was one she wouldn’t turn down. And truth be told, it wasn’t like she was getting blown out and finished in the Octagon. All of her UFC losses were by decision, two of the split variety. But a record doesn’t come with explanations; it comes with wins or losses, and Eye was losing. 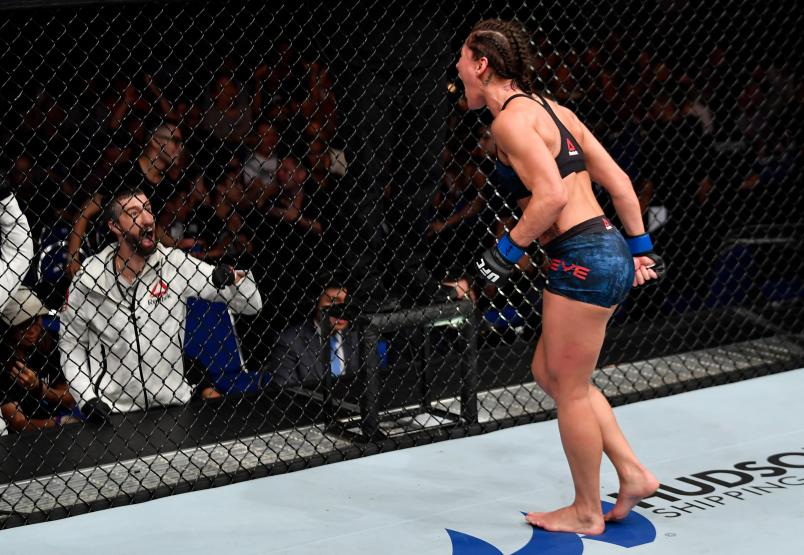 SINGAPORE - JUNE 23: Jessica Eye celebrates after her decision victory over Jessica-Rose Clark of Australia in their women's flyweight bout during the UFC Fight Night event at the Singapore Indoor Stadium on June 23, 2018 in Singapore. (Photo by Jeff Bottari/Zuffa LLC/Zuffa LLC via Getty Images)

SINGAPORE - JUNE 23: Jessica Eye celebrates after her decision victory over Jessica-Rose Clark of Australia in their women's flyweight bout during the UFC Fight Night event at the Singapore Indoor Stadium on June 23, 2018 in Singapore. (Photo by Jeff Bott

Until she wasn’t anymore.

And getting back in the win column had everything to do with the UFC’s introduction of the women’s flyweight division.

“I just kept believing, kept believing in myself, and believed that as soon as they created the division, it was time to hit the ground running,” said Eye, who has won each of her UFC starts at 125 pounds, defeating Kalindra Faria, Jessica-Rose Clark and Katlyn Chookagian.

That trio of victories earned Eye a shot at Shevchenko in this weekend’s co-main event in Chicago, and to celebrate the biggest fight of her life, she decided to up the degree of difficulty by moving to Las Vegas to train after spending much of her career with the Strong Style team known for producing former heavyweight champion Stipe Miocic.

“It was time for a change,” said Eye, who is now spending time working at the UFC Performance Institute, as well as with Xtreme Couture’s Eric Nicksick and Gray Maynard.

Such major changes aren’t usually preferable before such a big fight, but Eye couldn’t be happier.

“I tried to make things work in Cleveland, but once I knew that the title fight was going to happen, I felt like I wasn’t gonna be able to get it done in Cleveland anymore,” she said. “This is the first time I’ve ever lived out of state and doing a title fight, and I can’t wait for the opportunity to show that this is a good change. And change is good, even when it seems scary.”

Scary for some, but Eye has never shown fear, even if she might have felt it. She’s always walked into the storm, regardless of what awaited her, and that may have backfired here and there, but she believes she’s got more than a fighting chance this time around.

“I’m finally running in the lane I’m supposed to be,” Eye said. “I was given an opportunity to succeed now, where before it was almost like I was trying to spit in the wind.”

Eye will be the underdog again this weekend, a role she’s become accustomed to. And though getting here was a triumph in itself, “Evil” Eye is uninterested in moral victories. Only a true win will allow her to write a new narrative for herself, one that doesn’t focus on the past, but the present and the future.

“I’ve worked so hard in the last 14 months to change everything,” she said. “I can’t wait to put the cherry on top with this title fight because I think that at one point we won’t have to talk about the misfortunate part of my career. Or maybe we will and it will always be a part of helping people grow. But I can’t wait to be identified as a true champion and we won’t ever have to talk about how bad things were.”