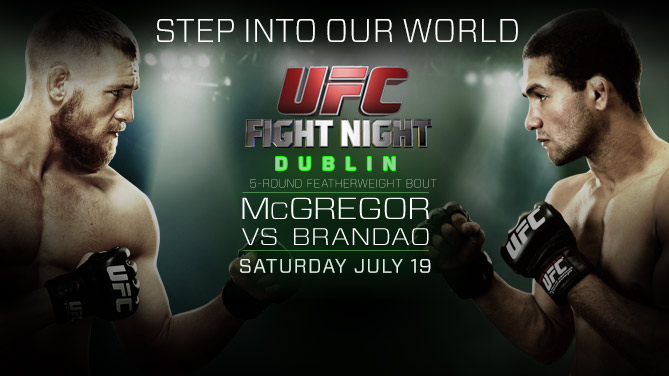 Extra tickets to The Ultimate Fighting Championship’s (UFC®) highly anticipated Dublin event are to go on sale Tuesday 1st July, following an unprecedented demand which saw the arena sell out in a matter of minutes.

UFC Fight Night Dublin: MCGREGOR vs. BRANDAO will take place at The 02 Arena in Dublin on Saturday 19th July and will see UFC star and local Irishman Conor “The Notorious” McGregor face up against Brazilian Diego “DB” Brandao in the main event.

After reconfiguring the in-house production at the sold-out O2 Arena, the UFC has been able to add extra seating to the event. This increased capacity will ensure UFC Fight Night Dublin shatters the company’s previous records in the capital for attendance and box office sales.

UFC Executive Vice President and Managing Director in Europe, Middle East and Africa (EMEA) Garry Cook said: “We’re ecstatic that this event has captured people’s imagination like it has and sold out in its original plan. The level of support is unbelievable and The O2 will have a blistering atmosphere from the very first horn. UFC Fight Night Dublin is already the most successful UFC event ever in Europe, and we are already planning more events throughout this year and into 2015.”

Tickets to the Dublin event, which is the fourth UFC event to take place across Europe and the Middle East this year, will be available via www.ticketmaster.ie and www.theo2.ie.