Experienced and Mature, Ryan Bader Finally Relaxed Inside the Octagon 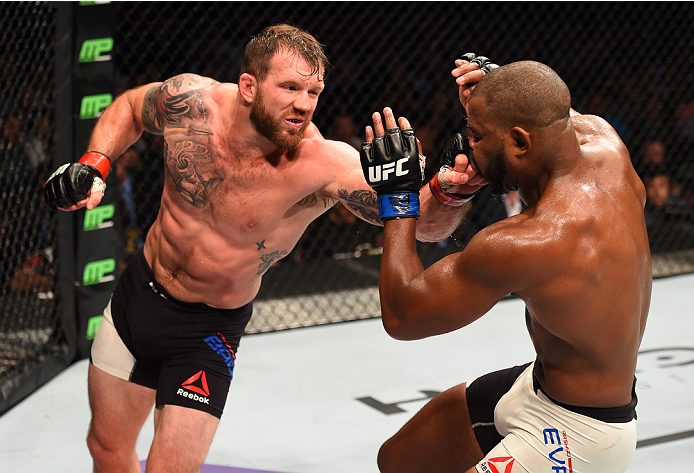 Ryan Bader was enjoying a vacation in Hawaii and celebrating his wife's birthday when the phone rang. Alexander Gustafsson was injured, and Rogerio Nogueira needed a new opponent to lead the card for UFC in Sao Paulo on Nov. 19.

Bader had fought not long before that, so he was still in fight shape. The will to return to the Octagon was there, too, so why not?

There is history in this fight. In 2008, Bader won The Ultimate Fighter 8 after training under the guidance of Rodrigo Nogueira, "Minotouro's" twin brother and legendary heavyweight. In 2010, "Darth" got the best of Lil'Nog, winning the UFC 119 battle by unanimous decision.

Since then, much has changed. Bader points out that on that first occasion, he was nervous when faced with the "first big name" of his career, and admits he did not feel comfortable at all in the stand-up department, especially against a skilled boxer. Now, in addition to the technical developments in his game, the light heavyweight is betting on his new-found emotional maturity to overcome the Brazilian once again.

See how Bader matches up against Nogueira ahead of their Nov. 19 clash

Bader said during a recent UFC media day in Rio de Janeiro. "It made me fight a certain way, made me take less risks. To be able to have fun with this means I'm just kind of free out there.

"It's not win or lose, it's fighting to my potential. If I do that, I have a better shot at winning than if I go with the sole purpose of winning. I'm relaxed during fight week, I get to go out there, I'm having fun, I enjoy the whole process."

Relaxing might just be one of the fundamental advantages to win in Brazil. The crowd is known for putting extra pressure on the backs of foreign athletes facing the local household names, after all. Bader, however, has been through this before, when he faced Glover Teixeira in Belo Horizonte in 2013.

"My preparation is the experience,” Bader said. "The Brazilian crowd is really passionate, a home team crowd. I know I'm not gonna be cheered on there. It is what it is. I'll use that as fuel for me. If there is passion and energy, it doesn't matter if it's for me or against me, I can feed off of that.

"I enjoyed the last time I fought in Brazil. I enjoyed the interaction with the fans, even though they were obviously going for Glover, there were a lot of cool people. It was definitely a cool experience."

Coming off an impressive knockout victory over Ilir Latifi at UFC Hamburg in September, Bader is currently the fourth-ranked light heavyweight. With Anthony Johnson set to face the champion Daniel Cormier, Glover coming from a loss and Gustafsson injured, the veteran does not rule out the possibility of fighting for the gold soon.

"I believe I'm one fight away from getting a title shot at all times,” Bader said. "I think I have to beat one of those top 3 guys. ... I always believe I'm right there.”