The short-notice call-up. It’s the ticket to the UFC for many prospects, the shortcut that keeps them from toiling on the local circuit in search of that call from the biggest promotion in mixed martial arts.

That’s the good news for fighters like Fabio Cherant. The bad news is that getting a call to replace an opponent on a few days’ notice isn’t as “simple” as showing up to the host hotel, cutting weight and getting to the venue for a fistfight.

“It was a two-day warning fight,” said Cherant of his UFC debut in March against Alonzo Menifield. “I had to deal with a lot mentally. Nothing bad, but I had to deal with mentally draining things with medicals to just getting everything done by deadline, trying to cut weight and I couldn't cut weight properly. It was a lot for something I didn't know about a few days before.”

But how does paperwork affect the fight? Mr. Cherant, let them know.

“You saw what happened, I lost,” he said of his submission defeat to the Texan. “After winning one of the biggest fights of my life. Thankfully, I had that fight to build off of, so it wasn't really too big of a hit on my mental strength or my ego. I was able to remember what I just did a month before. And that reminded me of the tear I've been on.”

Fabio Cherant (@BuffaloMMA8) talks about his move to @MMASanford and his thoughts on fighting William Knight at #UFCVegas34 🔊⬆️ pic.twitter.com/P1PSlNSzKU

What Cherant did a month before the Menifield fight was decision Myron Dennis to win the vacant LFA light heavyweight title. It was his third win since a loss to Aleksa Camur on season three of Dana White’s Contender Series, and it proved that despite that setback, the Brooklyn-born prospect was on the right track in his career.

“I've been trying to prove myself since my Contender Series loss, fighting bigger and bigger competition, going all the way to LFA, where I fought two times, and fought in CES once,” he said. “I made it a point to prove that I can fight guys with winning records, tougher competition, and I ran through most of them. And winning the (LFA) title, that was a huge boost of confidence. And I'm bringing that mindset to the fight. Everything that happened, I'm carrying that over to this upcoming fight, and being prepared as long as I have for this fight, it makes it a huge difference.”

This weekend, the 26-year-old Cherant makes his second walk to the Octagon to face William Knight. It’s a bout made for TD Garden in Boston, considering Cherant calls Wrentham, Mass home while Knight was born and raised in Connecticut. But Vegas it is for the 205-pound up and comers, who grew up as fighters on the same New England circuit.

“Me and him were literally neck and neck,” said Cherant. “He kinda got past me by getting into the UFC first and doing his thing, but we were neck and neck for a little bit. We've been around each other for two, three years. I've seen him fight, I'm sure he's seen me fight. It would have been great for the fight to be in Boston, but it doesn't matter where the field is, this fight was meant to happen.” 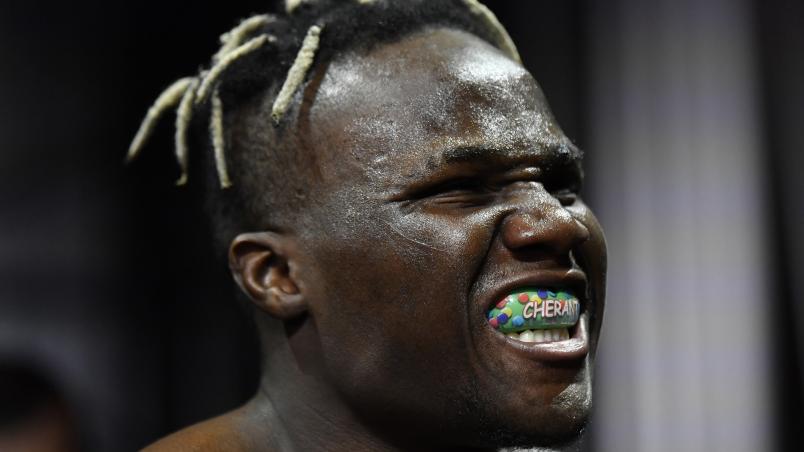 Fabio Cherant prepares to fight Alonzo Menifield in their light heavyweight fight during the UFC 260 event at UFC APEX on March 27, 2021 in Las Vegas, Nevada. (Photo by Jeff Bottari/Zuffa LLC)

What might not have been meant to happen is Cherant’s rapid rise to the UFC. It almost reminds you of those “Couch to 5k” apps that take you from doing nothing to running a race, because it’s easy to forget that Cherant has only been training since he was 21. That’s like picking up a baseball bat and five years later you’re roaming centerfield for the Red Sox. That just doesn’t happen, and it’s a part of Cherant’s story that should be noticed more.

“I feel like a lot of people forget that I've done it in such a short time,” he said. “I know guys in my area that have been training and fighting way longer than I have that still haven't had the opportunity to get into the UFC, and it means a lot to me because when I was 21, I just walked into a gym and started training. I started doing this just to get in shape and get feeling better about myself because the gym wasn't doing it for me anymore, and it just took off and I fell in love with it. I can't go without thanking the people that helped me get there - the training partners, the coaches I met throughout the way - it's not every day that somebody could do what I did.”

It's not, and while Cherant always had this goal in mind and wasn’t shy about letting anyone know it, he had plenty of skeptics along the way.

After my first amateur fight, my friends asked me, ‘What do you want to do with fighting?’” Cherant recalls. “I told them I want to be in the UFC by the time I'm 25 and they kinda laughed and thought I was joking, but I was being a hundred percent serious. And it's awesome that I got a chance to do that. It was a year late because of COVID, but I'm here now. A year late, but it still counts in my eyes.”

It does count, for sure. So what are those friends saying these days about Fabio Cherant, UFC fighter?

“I don't have friends anymore,” he says matter-of-factly. “I stopped caring about making friends. I have family, people that I trust and I would want around me in any situation. And if I can't trust you, then you can't be part of that circle. I have acquaintances, people I talk to, but I don't have friends anymore because after so many times of being let down by people, you stop caring. And the people that are able to gain my trust, I got all the love for them because it's hard to find genuine people nowadays.”