New Dad Thiago Santos Is On A Mission Heading Into His Main Event Bout Against Light Heavyweight Jamahal Hill At UFC Fight Night
By Thomas Gerbasi, on Twitter: @TGerbasi • Aug. 4, 2022

Thiago Santos may have had something on his mind other than Magomed Ankalaev when the two light heavyweight contenders met in March, but the Brazilian has no excuses for his five-round decision loss.

“My last fight against Ankalaev wasn’t how I planned it,” said Santos. “He did a good gameplan, he did his game very well and in the second round I had an injury, so it made me a little bit careful during the fight, but it is what it is. He did his game better than me, that was his night, and that’s it.”

But there’s more to it than that, as Santos and fellow UFC standout Yana Kunitskaya were expecting their first child together as “Marreta” got ready for battle in Las Vegas, and he knew that the call could come during fight week.

“Before my fight, Yana could have the baby at any time,” he said. “I think about it, but it didn’t make any problem for me. It was normal and I was always speaking with her, so I knew everything was okay.”

And if it got too close to fight night…

Luckily, Alisa decided to wait until dad took care of business in Las Vegas before making her appearance in April, and Santos couldn’t be happier to be a father for the second time, and his first time with Yana.

“Everything’s good,” he said. “She motivates me so much – and not just in fighting. She brings fuel to my fire to live, to breathe.”

You can see it in Santos’ face, and on Saturday, he plans on letting the world see it in his fists when he faces off with Jamahal Hill in the UFC Fight Night main event at the APEX. It’s an important fight for both men, and an expected barnburner for everyone watching.

“He’s a very aggressive guy, a striker, a little bit taller than me,” said Santos. “I think it’s gonna be a great fight with two strikers.” 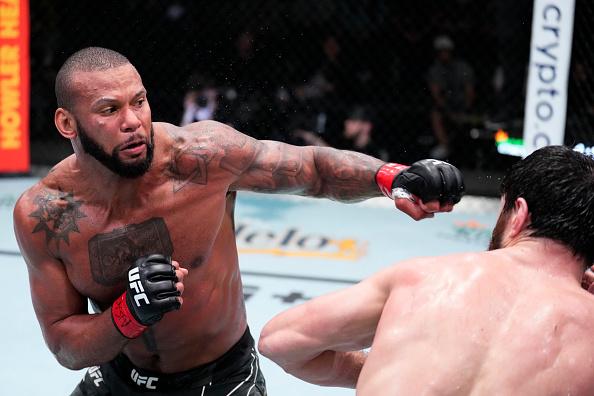 Thiago Santos of Brazil staggers Magomed Ankalaev of Russia with a punch in their light heavyweight fight during the UFC Fight Night event at UFC APEX on March 12, 2022 in Las Vegas, Nevada. (Photo by Chris Unger/Zuffa LLC)

Two strikers chasing the same goal, but from different places in their careers. Santos has been to the mountaintop, nearly taking Jon Jones’ title in July of 2019 before losing a split decision. Since then, it’s been a rough road for the Brazilian, who is 1-3 in his last four. And while fan might be more forgiving of that stretch if Santos went out guns blazing like he did on the way to the top, that’s one thing. But the Santos of the last few fights has been tentative about pulling the trigger, despite his one-punch stopping power. He says that all changes this weekend.

“I think this fight is very important for me,” he said. “My last fights, I didn’t show that I deserve to go to a title shot again, so I need to prove this – first to myself, and then show to everyone that I am capable to go to the title shot again and become light heavyweight champion. So I’m gonna fight him different than my last fight. The key for this fight is to show my power, put pressure on him and fight like crazy. I miss these crazy fights. He’s very aggressive so it’s making me excited for this fight. I hope he comes like his last fights and comes to knock me out. I’m going to go to him and it’s gonna be fireworks.”

That’s a good sign for UFC fans, perhaps a bad sign for the once-beaten Hill, who is unafraid of getting into a firefight. That’s mainly worked for the Michigan product, who has ended six of his 10 pro wins by knockout, including Jimmy Crute and Johnny Walker in his last two bouts. But few get into a slugfest with Santos and come out unscathed, and that’s what the 38-year-old is hoping for.

“He’s a young guy, up and coming, a prospect,” said Santos of the 31-year-old Hill. “It’s how things should be. I am top five in the world, and he’s a young guy doing a very good job, and I knew one day we would fight against each other, and now it’s time. He’s very talented and he deserves this fight, but he’s gonna figure out that it’s a tough fight for him.”

In other words, don’t believe that the Santos we’ve seen since the Jones fight is the one in Las Vegas about to fight for the first time as Alisa’s dad.

“You guys are gonna see a different fighter,” he said. “He (Hill) probably saw my last three, four fights, but he needs to prepare for a different Thiago Santos.”