After dealing with significant anxiety and personal demons, Megan Anderson has renewed focus heading into her UFC 243 bout against Zarah Fairn Dos Santos.
By Zac Pacleb, on Twitter @ZacPacleb • Oct. 2, 2019

Instead of getting loose before her May fight against Felicia Spencer, Megan Anderson sat in her hotel room in Rochester, New York as her coach convinced her to not pull out of the bout. Not because she suffered an injury, but because she wasn’t sure she wanted to fight anymore.

Ultimately, Anderson went through with the fight, which ended in a first-round submission win for Spencer. Anderson, who is always open about her battles with mental health and self-esteem issues, knew her approach to fighting needed an evolution.

“I think it’s a gradual process,” she said. “It’s not going to change overnight, but I feel so much better about everything, and I just found my love for the sport again.”

She took two months off from training to focus on herself and identify some solutions before she got back into fighting.

Anderson highlighted her tendency to put a lot of pressure on herself and live up to high expectations, and while that may help motivate some fighters, for her, it created an unnecessary amount of weight that hindered her ability to focus on performing to the best of her ability.

“I think I kind of hit a spot where I just let everything else weigh on me,” she said. “I’m the type of person where I get super emotional about things, and I’m my own worst critic. I’m harder on myself than anybody else, but I think that’s been lifted now.”

Once she returned to training, she and her coaches devised a plan that was less of the “bull in a china shop” approach they used previously and one that was much keener on recovery and energy management. Instead of trying to go 100 percent three times a day, training sessions were split between that all-out mentality and a more technical, game plan-centric session that allowed Anderson’s body to recover for the next day’s work.

The approach also allowed for open communication between Anderson and her coaches. If she wasn’t feeling a certain type of way, the team would just adjust accordingly.

“I think there’s a mindset of ‘the grind’ for fighters in MMA,” Anderson said. “I think, once upon a time, you could outwork your opponent, and that would set you up for success, but I think nowadays where everyone is good everywhere, that mentality – particularly for me – is not working just because I don’t ever feel recovered when I train like that, and so my body is beat up, my mind is beat up from the constant training and the grind, which I think there is a time and place for that, but I think there is a much smarter way to go about it.”

That “smarter way” helped Anderson experience what she called “more growth in the last 13 weeks with this new plan” than any other camp before it.

It also helped her rediscover her love for fighting. While she enjoys the technical parts of the sport, the competition aspect was something she wavered on before her fight against Spencer.

“I would get massive anxiety just thinking about fighting,” Anderson said. “But I think I got to a point where we kind of worked through some stuff from my childhood and that kind of stuff that was weighing on me, and really for me, it was about finding my own confidence in myself as a person, and that kind of transcended across into fighting.” 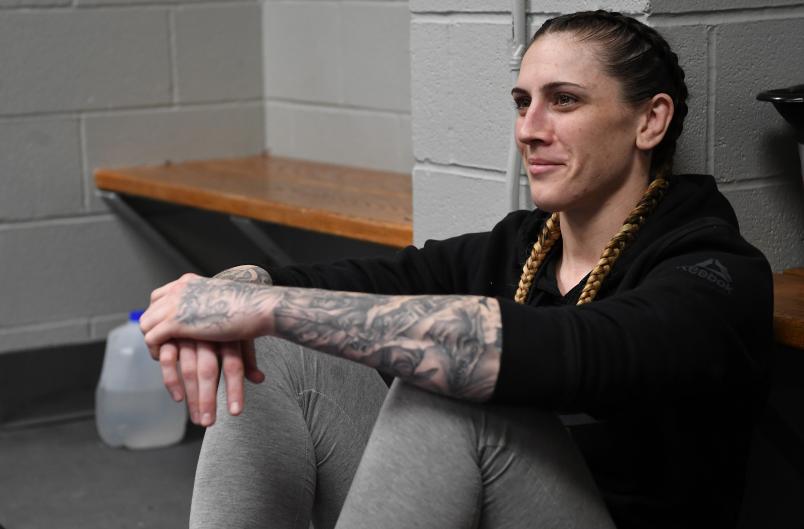 ROCHESTER, NY - MAY 18: Megan Anderson of Australia warms up backstage prior to her bout against Felicia Spencer of Canada during the UFC Fight Night event at Blue Cross Arena on May 18, 2019 in Rochester, New York. (Photo by Mike Roach/Zuffa LLC/Zuffa LLC via Getty Images)

ROCHESTER, NY - MAY 18: Megan Anderson of Australia warms up backstage prior to her bout against Felicia Spencer of Canada during the UFC Fight Night event at Blue Cross Arena on May 18, 2019 in Rochester, New York. (Photo by Mike Roach/Zuffa LLC/Zuffa LL

Now, with her renewed fondness for MMA, Anderson is even more excited to compete in her home country of Australia for the first time in nearly five years and for the first time under the UFC banner. She’s expecting the crowd in Marvel Stadium to pop for her, and while the crowd will likely be larger than any she’s fought in front of before, she said she’ll draw on her experience in the United Center in Chicago when she fought Holly Holm at UFC 225.

Welcoming Zarah Fairn Dos Santos to the promotion, Anderson said this fight allows her to showcase her full set of skills that she hasn’t yet been able to put on display in the sport’s biggest promotion. To do so in Melbourne, Anderson added, makes it feel like things have come “full-circle.”

“I think I had a lot of demons from my past that I had to get over because it kind of got to a point where it was affecting my martial arts side,” Anderson said. “We’ve definitely worked on that, and I feel like a big weight has been lifted off my shoulders, and I’m really excited to just go out and have fun.”