In this UK exclusive, former UFC welterweight champion Georges St-Pierre, one of the stars of Marvel’s “Captain America: The Winter Soldier,” talks about playing Batroc, his “Superman Punch” and getting advice from Arnold Schwarzenegger… 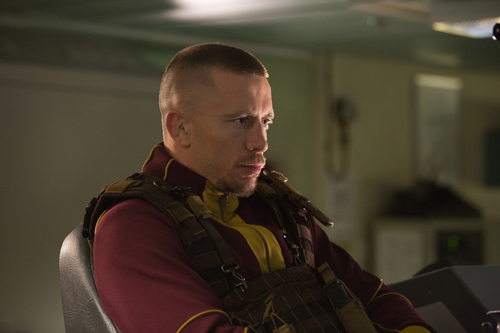 Q: How did the role in Marvel’s “Captain America: The Winter Soldier” come about?
A: I didn’t want to take a big role, only a small one, because I’m a professional athlete and not an actor. I think that’s why they came to me with the project. But I was very excited, it was a new experience for me, the people were really nice and it was a lot of fun. I was on set for five days, but it wasn’t all shooting as it involved a lot of rehearsals. Hopefully I will get the chance to do it again.

Q: Tell us about your character, Batroc?
A: He’s a French mercenary, and I speak French in it; he’s a martial expert and a bad guy in the movie, which is different to me in real life as everyday I try and be a good guy. My role is a small one but I have a big fight scene with a lot of martial arts, so it was perfectly suited for me.

Q: How familiar were you with the character before filming? Did you research the comics?
A: I’m a fan of superheroes and I started reading the comic books when I was a kid. They say Batroc is an Olympic lifting champion and can jump very high, but he doesn’t have super powers; he’s just very athletic.

Q: Did you have any involvement in the choreography of your fight scene?
A: I changed one thing but for the most part it was the stunt team; I’m a professional fighter but not a professional in the movie business so I let them do their job. When you fight for camera and when you fight for real it is very different. When you fight for the camera you have to make everything look big and I was not used to that, but I had a lot of help from the stunt team. When I arrived in Los Angeles to meet the stunt team they showed me what I needed to do. We went through the whole fight scene and broke it down into parts. There’s a lot of repetition and changing of camera angles until it looks perfect on camera. At first it looked very hard but with their help I managed to do it. There were one or two little things I couldn’t do as it involved a lot of acrobatic stuff, but the rest I did myself.

Q: What was the one thing that you changed?
A: I wasn’t comfortable with one of the moves in the fight scene, so I said to them, ‘If it was me, I would do something different’. They were happy for me to give my opinion as they felt it would be more natural if I fought the way I would normally fight. So I put in a “Superman Punch” as it is one of my signature moves and I think it made the fight look more authentic.

Q: What makes Batroc a worthy opponent for Cap?
A: He doesn’t have super powers but he is one of the strongest human beings in the world and a great martial artist so he gives Captain America a lot of hell.

Q: Tell us about filming fight scenes with Chris Evans?
A: Most of my fight scenes were not with Chris Evans but his stunt double because I cannot afford to hurt the main actor. I knew Chris a little bit beforehand. He’s an amazing guy and he helped me a lot; he showed me how to fall properly and to make it appear real.

Q: You announced in December that you’re taking time off from MMA. Will this give you time to concentrate on more film roles?
A: Yes I plan to. Why not? Doing some more movies would be great. I’ve tested the water and it was a lot of fun. I love action movies, I’m a huge fan of “Star Wars” and I’d love to be involved in that. I love superhero movies and things like “Terminator,” anything that involves martial arts and action scenes.

Q: You tweeted a picture of you watching UFC 171 with Arnold Schwarzenegger. Would you like to follow in his footsteps?
A: I’ve met him a few times and he’s my all-time idol. He is such an inspiration. He gave me some great advice: ‘If you take a break from your sport, don’t listen to anybody, and if you decide to go back, go back hungry or not at all. Maybe you will never go back but it has to be your choice and you have to be 100 per cent sure’. Only a few people can understand that. Arnold has competed at a world-class level at bodybuilding and he’s done so many different things in his life from acting to politics so he knows how to deal with pressure. Him telling me that stuff made me feel very confident about the future. He also gave me some good advice about training as I want to gain muscle mass and he told me what sort of training I should do to achieve that.

Q: Now that you’re not fighting professionally do you still keep up the same level of training?
A: I still train every day, in fact I’ve just finished gymnastic training and I’ll be training again later today. I’m probably in better shape than I was when I was fighting. I’m definitely healthier and less stressed.