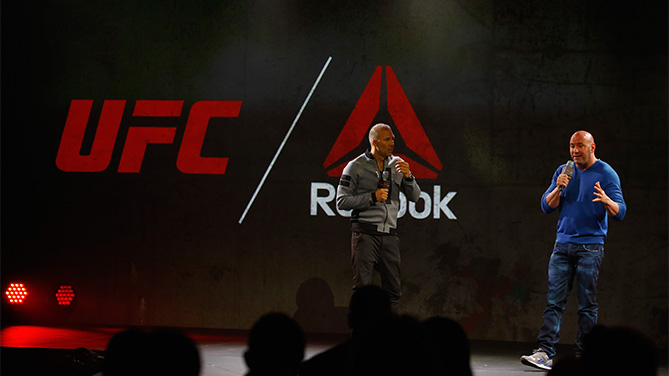 The UFC and its look changed forever on Tuesday when the first-ever UFC Fight Kit was revealed by the promotion and its partner Reebok at the Skylight Modern in New York City.

“This is a big one for us,” UFC President Dana White said. “We've had a lot of historical moments over the last 15 years, and this is definitely one of the big ones. Now, like every other sport, we have a major sporting apparel brand behind the UFC, producing these kits for the fighters, and it's a moment that Lorenzo (Fertitta), Frank (Fertitta) and I and the rest of the team have been very excited for.” 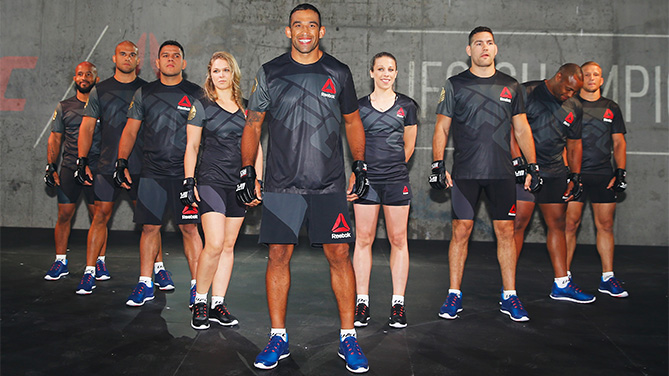 A major part of the UFC’s landmark deal with Reebok, which was struck in December of 2014, involved outfitting the fighters on the roster with the Fight Kit, which includes gear to be worn during official functions on fight week, as well as a fight night kit which will provide a streamlined look while providing the athletes apparel made with the latest technological advances.
More than 20 UFC athletes, including nearly the entire championship roster, modeled the Fight Kit for the first time Tuesday. Included on the runway were three members of the UFC 189 card -- UFC welterweight champion Robbie Lawler, challenger Rory MacDonald and featherweight title challenger Conor McGregor.
The July 11 card in Las Vegas marks the first event to feature the Reebok kit.
For UFC Chairman and CEO Lorenzo Fertitta, the grand unveil marks a key time in the company’s history, a milestone that didn’t always seem to be on the horizon during some of the lean times of the promotion, or even during good years when some of the sponsors brought in by fighters had little or no relation to mixed martial arts.

“Absolutely,” Fertitta said. “It was that, and to be honest with you, I was sitting there one night and I turned to Dana and I said 'I hate these banners; they're driving me crazy.' So we just started talking and we said, 'maybe we should talk to some of the top apparel brands and see if there's any interest and see if something can be put together.'

“And that process started probably four or five years ago. As with anything that's worth doing, it takes time, effort and energy, and we knew that anytime you have a long history in a sport, to make any kind of a monumental change, people are going to say 'whoa, you can't do that.' Ultimately, we did what we felt was best for the fighters and for the brand, and here we are today." 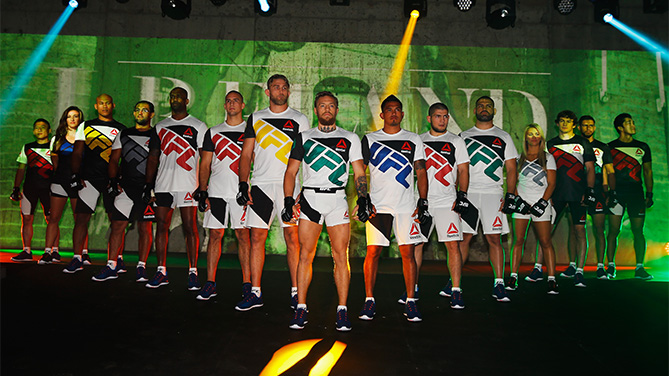 There were plenty of smiles, not just from the UFC and Reebok execs but also from the fighters, who graciously welcomed a horde of media that packed the room. The audience wasn’t limited to MMA media, but also featured media outlets covering everything from sports to entertainment and fashion.

Not surprisingly, Mr. McGregor was a popular figure and the picture of calm as the biggest fight of his career approaches.

“This is part of the business,” he said, seemingly unbothered by the break in training camp to make the trip from Las Vegas to New York. “You must be able to find comfort in these environments because this is what it entails. You must be able to juggle, and I have become a master of it.”

The Irishman, proudly wearing his jersey with a shamrock representing Ireland on his shoulder, may have had a whirlwind tour from cult favorite to international star in the last two and a half years, but one of the newest members of the Reebok athlete roster says a day like this was always part of the plan.

“I always say I can't believe it, but really, I could believe and I did,” he said. “I had to believe because if I didn't, I wouldn't be here. I saw something like this.”

So did Fertitta, White and the UFC brass, whose goal all along was to put the UFC and mixed martial arts in the same arena as the NFL, NBA, NHL and MLB, and to take it internationally. The work is far from done, but as Fertitta sees it, Tuesday’s kit unveil was a good day, and he expects July 11 to be even better.

“I'm really looking forward to the 11th, because you're going to see a whole new look and feel for the product, and it goes beyond just the UFC fighter kits,” he said. “That's just one element and it's going to obviously make everybody look more professional. We've got a tremendous amount of positive responses from a lot of people that matter to the sport - broadcasters, sponsors - and in addition to that, we've done a lot of work on our brand and what our brand pillars are, and the broadcast will look a lot different as well.

“We've made a few tweaks to the live event and the way you view it on television, so it's going to have a whole new look and feel. One of the things I'm constantly trying to do, and what I feel my role is, is to push our organization to try and do something better. We never rely on where we were, but always shoot for making the fan experience better.”