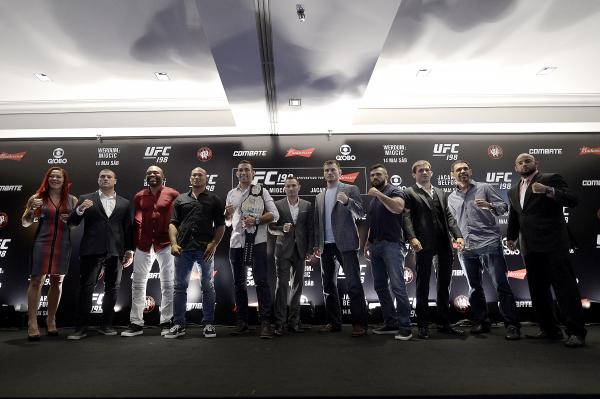 The first large-scale conclave of stars for UFC 198 came together on one stage in Rio de Janeiro on Wednesday, a rare gathering featuring Fabricio Werdum, Stipe Miocic, Vitor Belfort and Anderson Silva as part of the tickets on-sale press conference for the hugely popular May 14 event in Curitiba.

Already, anticipation for the card at Estádio do Atlético Paranaense, a 43,000-seat soccer stadium that served as a 2014 World Cup venue, has been incredibly strong: Ticket sales have been so brisk, UFC officials released another block of seats just as Giovani Decker, the President of UFC Brazil, took the stage to introduce what he believes is one of the most star-studded UFC pay-per-views in history.

The greatness of this night of fights was not lost on the athletes.
Heavyweight champion Fabricio Werdum talked about the challenge of defending his title against Stipe Miocic, in a stadium setting that’s never been experienced in Brazil for an MMA event.

"The arena is an impressive structure … I'm 100 percent ready to make a big fight and have the 45,000 fans
with me,” Werdum said. “If I could change the name of the card, I would name it 'UFC 198: Emotion'. It's going to be thrilling and unforgettable."

As she prepares to make one of the most-anticipated debuts in UFC history, Cris Cyborg seemed to have a hard time believing that she was finally part of a UFC press conference as she discussed her opportunity to fight in the Octagon.

"Let me take a deep breath,” she said before answering her first media question. "I am really happy. I think this moment has come not too early, and not too late. It's the right time.

“Everything that I've been through in my career is going to be consecrated in the UFC, in Curitiba. I am ready, and I want to show a good fight.”

But it's not only the emotions and expectations that are spotlighting the intriguing lineup in Curitiba. Throughout the card, there is much at stake. 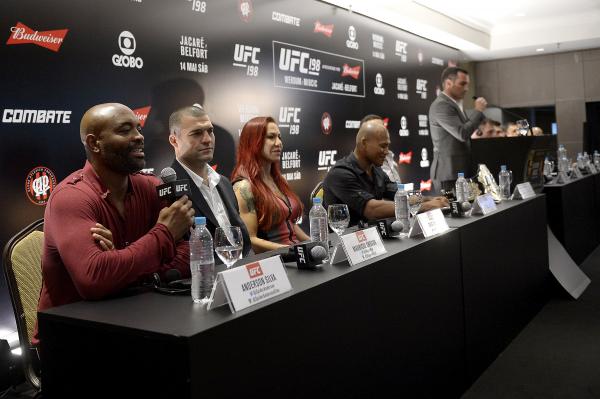 The duel between Ronaldo Jacare and Vitor Belfort, for example, may define the next challenger in the middleweight division; in particular, who will face the winner of the rematch between Luke Rockhold and Chris Weidman.

"The winner of this fight deserves to fight for the title," Belfort said. "This merit is mine and Jacare's.

“I'm going to train and focus on this fight. The destiny is made of today, so I'm focusing on the present.”

Demian Maia is on a similar situation. No. 6 in the UFC welterweight rankings, the Brazilian faces 8th-ranked Matt Brown and, with another victory, will come away from Curitiba with five wins in a row.

"If I win, it's no secret: I want to fight for the title,” Maia said. “I've been in this sport for a long time. It's like Vitor said, I will have the merit, and no one can take it from me. I want to do my best, win, and have a title shot after that.”

The relaxed atmosphere, however, disappeared when the tables were displaced and the stage was made ready to receive
the fighter face-offs.

Jacare and Belfort barely blinked during the eye-to-eye moment. Werdum even made his famous "happy face" next to Miocic, but scowled when he came face to face with the challenger. But all the posturing only contributed to the fans’ anticipation of a May 14 blockbuster event for Brazil.

Remaining tickets for UFC 198 can be purchased on www.livepass.br, and UFC VIP Experience packages also are available.