Excitement in Buffalo mounts as UFC 210 draws near

The excitement for the UFC’s return to Buffalo for UFC 210 runs the gamut of emotions, from relief to excitement. After all, it’s been 21 years since UFC 7 hit the shores of Lake Erie, and the April 8 event at KeyBank Center is the grand prize many have been working hard to obtain.

New York State Senator Tim Kennedy has been on the front lines the past seven years pleading with fellow lawmakers in New York to vote to legalize mixed martial arts in the state.

“We recognized how important UFC is to the economy, not just to sports enthusiasts,” Kennedy told UFC.com during a recent Buffalo Sabres game. “Everybody likes a good fight. We were able to get it across the finish line.”

KeyBank Center is in the heart of a revitalized downtown Buffalo, putting the city on center stage for UFC 210. Buffalo Sabres owner Kim Pegula has her finger on the pulse of the community and she says its members have been buzzing about MMA in Western New York.

“The city is super excited. We’re a great sports town but this city supports anything that comes here,” Pegula said. “For us to be one of the first here in New York to have the fight here … it’s going to be great and they’ll support it. We love sports.”

Daniel Cormier and Anthony Johnson spent a day touring the city of Buffalo on Feb. 17 and both main event superstars took to the city. The locals are hungry for a winner after almost two full decades without an NFL playoff berth for their hometown Buffalo Bills. 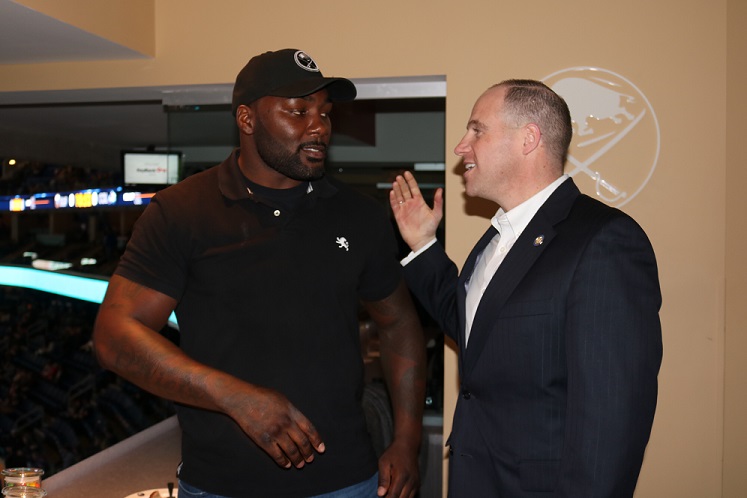 Kennedy said he’s appreciative of the efforts by UFC stars who have campaigned for the legalization of MMA, including former bantamweight champion Ronda Rousey and former middleweight champion Chris Weidman.

Hailing from Baldwin, New York, Weidman is set to compete for the second time in his home state when he meets Gegard Mousasi in the co-main event in Buffalo.

The fighters are ready and the city is excited for the return of the UFC.

“(UFC 210) will make Buffalo the showcase for the rest of the world,” Kennedy said. “It will really show off the renaissance that’s happening in the heart of our community. We’re thrilled to make Buffalo the center of attention once again as it comes to sporting events and something we can all cheer for – the legalization of mixed martial arts.”