Ewell determined to display his talent at UFC Sao Paulo

A few days ago I got the call( @danawhite ). I have signed with the @ufc please know that I’ve been crying the past few days!. It’s truly crazy how things are coming together. I’m truly someone that has came from nothing! & has fought my way through hell to get to this position. pic.twitter.com/N3fVJabT6n
— Andre “AfroMonkey” Ewell (@daii24_dre) August 1, 2018

When bantamweight Andre Ewell got the call every fighter wants to get, he wasn’t too particular about the particulars. Sure, it would have been nice for the Anaheim native to fight on August 4 in LA’s STAPLES Center, but that was just a minor consideration.

He was a UFC fighter. That’s what mattered. Not venue, not date, not opponent.

So fighting a Brazilian in Brazil was okay?

“They said Brazil, I said yes,” he laughs. “I don’t care. I don’t mind going to other people’s houses. You’re gonna know me for five minutes and I’m gonna turn that thing into my house. The cage is my home, so it doesn’t really matter where it’s at.”

Even if it’s making your debut against former UFC bantamweight champion and a longtime member of the pound-for-pound list, Renan Barao?

“If you’re in front of me, I’m destroying you. It doesn’t matter who’s up in there.”

That’s two in the “yes” column. As for the date, that’s when everything hit the 30-year-old.

“The date, September 22, is an anniversary for me,” Ewell said of the day his fight with Barao will take place in Sao Paulo. “And it’s not a good anniversary, but it’s five years ago that I was basically pulled out of my son’s life. For five years, I’ve been in and out of court, trying to fight to be in his life. And that’s what made me go to MMA in the first place.” 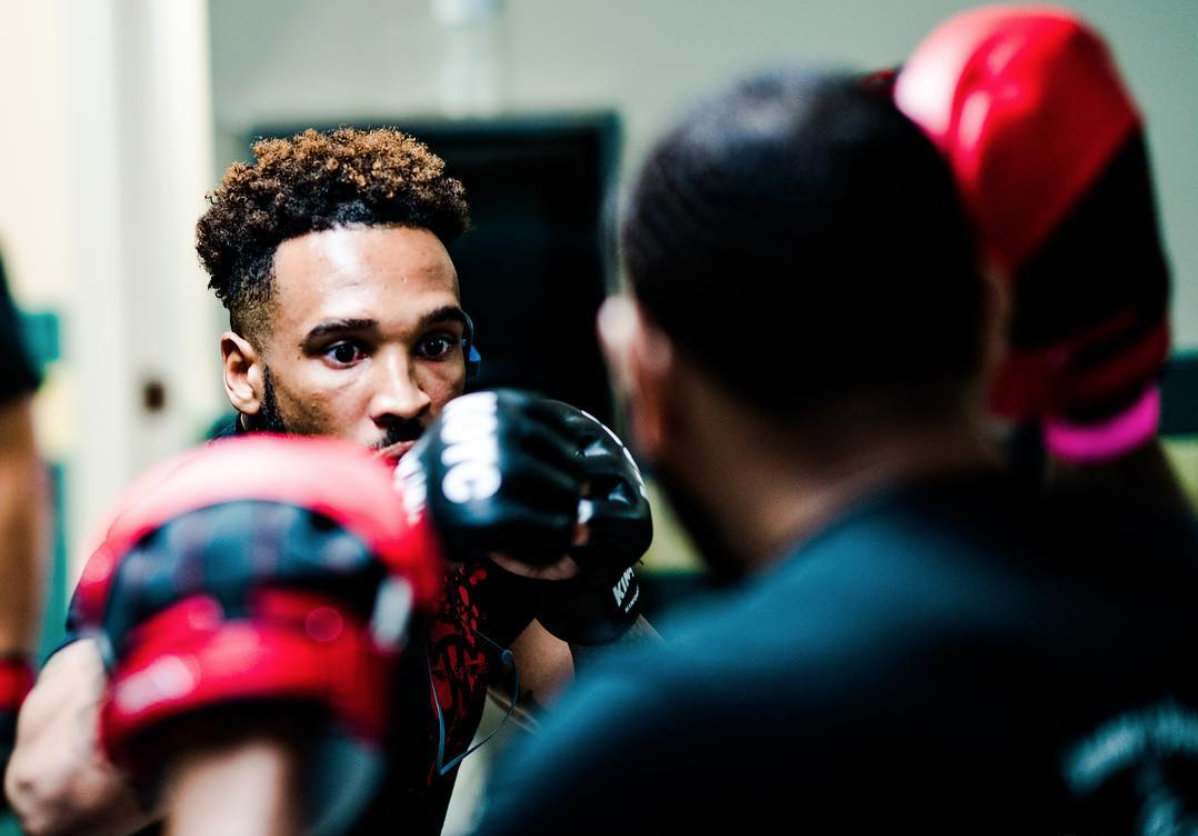 Ewell boxed professionally from 2011 to 2013, compiling an 0-4 record before getting disillusioned with the sport, as many without high-powered connections in the sweet science will. Just before his last boxing match, his son Eli Edward Ewell was born on March 31, 2013.

All was well until issues with his girlfriend’s parents began. Soon after, he broke up with his girlfriend and a custody battle began. Ewell lost that battle, at least for the moment, and he’ll never forget the look the judge gave him before rendering his verdict.

“He wasn’t looking at me, and then when he did, he looked at me as if there was no value in me.”

September 23, 2013 was the last time Ewell saw Eli. A little less than two years later, he had his first mixed martial arts bout.

“I knew I was really great at fighting,” he said. “I just never pushed it because I had my son. And he’s five. So being in his life and seeing him, I want to be a father, and that’s the bigger picture. I’m a fighter for my son and I’m fighting to be in his life and to bring value to my life, where everybody sees how great I am.”

Now 13-4 as a pro, Ewell has won four in a row, all by knockout or submission, garnering him the call-up to the big show. And now that you know what he’s fighting for, it’s clear that anything Barao will throw at him will pale in comparison to what he’s already dealt with.

“Two days before I signed the contract, I was about to be homeless,” he admits. “Then I’m signing a contract and the next thing you know, I’m getting a home later on that weekend. So me getting signed is honestly a big deal. You know, I’m not the type to pray for things. I’m the type that actually has to work for things. So I don’t hope for things. But I do know that I work my butt off and I will continue to do that for everything I do.”

“You’re probably gonna see me bawling after the fight,” he laughs. “But I’m gonna walk out with fans. People are gonna end up loving me. I respect the sport and I respect the person I’m going up against, and the old king of the jungle is getting ready to meet the new king of the jungle. It’s time to take over. There’s a new wave coming in, and I’m the new wave.

“I like things to be exciting,” Ewell continues. “And I’ll end up doing things just to make things exciting for the world because I want to be worldwide. You build up value there. And the value I bring, people end up seeing it. So when I go back to that courtroom, that judge that didn’t look at me is going to be looking at me. And he’ll see the value that’s going on in my situation.”